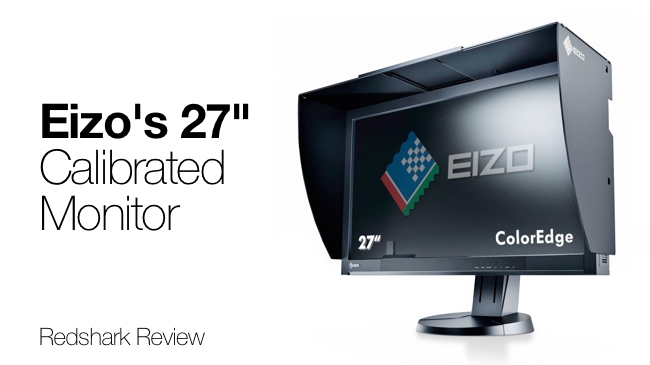 Monitor manufacturer Eizo is making a decent name for itself serving the fairly specific part of the film and TV market that needs a good display but equally doesn’t want to fork out a king’s ransom to buy one. The 27in, 2560 x 1440 CG277 is a good case in point.

A while ago, we looked at Eizo's CG318 4K display and concluded that it was an excellent option for anyone looking for a way into a reasonably accurate video display for grading or camerawork, without forking out very large amounts of money for the big brand OLED displays. At around £3000, the CG318 seems a good deal considering that there are really very few other options with a similar level of performance, especially if we have a requirement for film-industry colour standards. Many desktop computer displays support Adobe RGB. Very few indeed support Rec. 709, let alone the DCI-P3, SMPTE-C (but not Rec. 2020) and other standards of interest to film and television people. One that does, however, is Eizo's smaller CG277 display, which provides a useful point of comparison.

What's key is that the CG277 sells for a little over £1100, and while it's well under half the price of the 4K CG318 it's probably more than half the display and therefore represents an interesting option. With 2560 x 1440 resolution, it's big enough to monitor HD and still have room for a user interface, and as a workstation display its 27-inch diagonal is enough to make the high resolution usable in much the same way as the 32-inch CG318 made 4K worthwhile. It's possible to get more pixels for less, but 24in 4K displays really are an exercise in eyestrain and I have a policy to maintain here: better pixels always beat more pixels, and that's as true for displays as it is for cameras.

With reference to the quality of the CG277's pixels, the underlying technology is promising. The backlight uses the most recent technology, sometimes called GB-r, wherein both green and blue LEDs are used together with a red-emitting phosphor to create a better white, and thus better colour rendering, than the traditional white LED approach of driving a yellow-emitting phosphor with a blue LED. We haven't seen any LED lighting using this approach – the industry seems to be leaning toward UV-driven RGB phosphors in that field – but it's an interesting thought. The LCD panel, almost certainly made by LG, is of IPS type which, without indulging in an extended digression on the physics of TFT panels, is good news for contrast and colour rendering.

The subjective impression of contrast is not quite as good as the CG318, but then again very few things are and the monitor is nice to look at. The CG277 is also very consistent; things don't change much when we drift off axis and there isn't any colour shift – just a little darkening in the far side of the display when viewed from acute horizontal angles. Some of the problems of cheaper displays, such as backlight bleed-through, are of course completely absent. The display supports Eizo's ColorNavigator software with centralised management options, and although that's mainly of use to people matching a whole suite of displays there are the usual options to create and store user calibrations.

There are DVI, DisplayPort and HDMI connectors and the display will accept 4K signals at 30fps, so it can be pressed into service as a slightly sub-resolution 4K monitor if the need arises. In all honesty its suitability as a camera monitor is compromised by the fact that it doesn't have a 4K panel, but the feature is there in extremis. In an update from previous models the HDMI now supports 10-bit colour and the internal lookup tables are at 16-bit, to maintain that high precision – this is a key advantage over less cautiously-designed displays, where the panels themselves are often 8-bit at best and the internal electronics are not seen as a priority since most users simply won't notice. Physical controls are limited to a straightforward row of buttons which control the menus. Because the CG277 has Eizo's familiar rather deep, chunky frame it's best to look at the thing square on when making adjustments, both to keep the picture consistent and to ensure the buttons line up with the on-screen graphics. This is a minor complaint, though, and the menus are straightforward. Most displays will be a set-up-and-leave in any case.

The CG277 helpfully starts blinking the power-on light when it thinks a calibration is due. The sensor boom – bottom mounted in this display – swings out from behind a spring-loaded door into an observation position over the display, and a series of colour ramps are displayed. The calibration process takes only a few minutes.

The usefulness of 2500 pixels

The CG277 has a slightly oddball resolution to be considered as a camera monitor, the 4K downscale option notwithstanding. It'd be nice if someone made a device or piece of software that could put an HD video image into one corner, and fill the remaining space with test and measurement displays. Either way, this is really a workstation monitor and for things like Resolve it is very lovely, with ample space for both the UI and an image of not quite full resolution (this is a limitation of Resolve's layout, as opposed to the monitor itself). As with all these things, the usefulness of a 2500-wide display is only obvious once it's been personally experienced. This is not a less-is-more situation and anyone with 1920-wide displays should look at a side by side comparison, just for the ergonomic benefits.

This may well be the most affordable way into a calibrated display. With few monitor manufacturers seemingly interested in serving the fairly specific part of the film and TV market that need something decent but don't want to buy Sony, their preeminence now seems fairly well entrenched. The CG277 is a fine display; and we await Eizo's future developments with keen anticipation. Whether the company will choose to enter the OLED sphere as the costs become more realistic is an open question, but if they do, we can expect great things of the results.