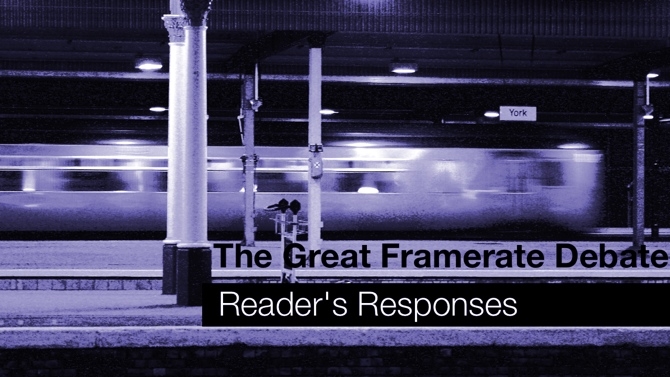 Our series of articles on Framerates was extremely popular and some of you have written to us with your opinions on the subject. Here's what RedShark reader Scott Hooson thinks. While his views may have some of you reaching for your tin-foil hats, Scott's background in experimental pyschology and forensics suggests that we should at least hear what he has to say.

(The opinions expressed in the article are the author's, and do not necessarily reflect the opinions of RedShark)

Part 1 of the Great Framerate Debate is here

Joseph Chilton Pierce is one among many (including iconic child development psychologist Piaget) that has maintained that sensory input has brain altering consequences. CGI effects and the inexorable shift to synthetic actors and environments is combining with the stretched cinematic devices of storytellers to make content subservient to style.

In effect, it is trending that all our sensory input is under threat of becoming completely subject to being manipulated by technological prowess. Each sense can be presented with synthetic stimuli that is indistinguishable from "natural". The still photograph cannot be trusted- it is "photoshopped".

CGI, motion capture, etc. are doing the same thing to video/ cinema. 3D only adds to the ability to go around some safeguards.

Film-makers should be accountable

I am not arguing for a "luddite" or fundamentalist return to a media free or hobbled and censored state of affairs. I am however wanting those who use media with such powerful potential to deceive to be aware and accountable.

By analogy, lawyers who defend the guilty, take it upon themselves to be the arbiter of what is best for society.

Where the "system" is used to shield the guilty, not protect the innocent, they interfere with consequences that are used to benefit us all.

In similar ways, storytellers must declare the fictions up front and let the art be its testimony.

Douglas Trumble and Showscan have shown, along with tactile and positional attributes in sync, to have profound abilities to manipulate heart rate, skin conductivity (sweating, etc) and other physiological effects. This is not trivial. When we move past the body's sensory discernment levels (the "Nyquist limit") we must be very careful. Magic is what follows and it's not always entertainment.

I once gave a presentation (early 90's) to an audience of forensic professionals about how we were going to be the last generation where we had any trust in what we experienced. Technology was in place and near at hand that could make us believe we experienced something with the level of confidence we had 100 years ago.

Science fiction writers have been exploring this topic for 20 years or more. The internet has made authorship secondary.

No matter what the "gatekeepers" of old media had as an agenda (for surely they did); there was a higher expectation and confidence that content had merit than people have today. The cynic, skeptic and conspiratorial have been let loose on fertile ground.

"Don't blame the tool- it is how it will be used" is how technology is defended, whether atom bombs or anti-biotics.

The problem is that most that use the tools never think about the consequences: it's it's always about money.

Frame rates: these are tools that have consequences. Just be aware and take responsibility!

Part 1 of the Great Framerate Debate is here