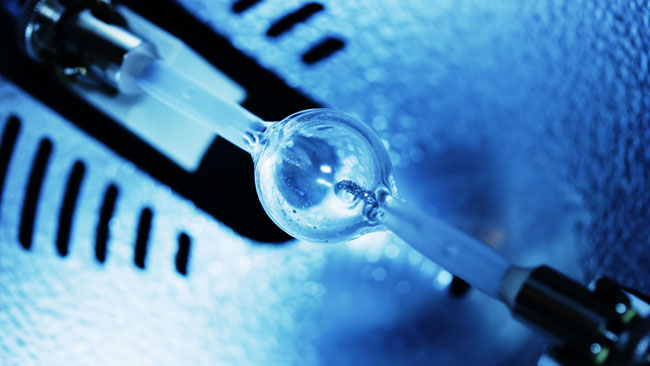 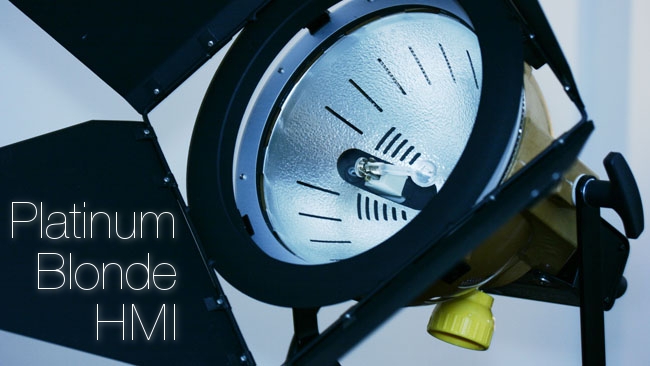 Given Photon Beard's rather successful LED respin of the classic redhead, it's perhaps fitting that the first HMI in its 130-year history is a blonde. There are so many daringly chauvinistic plays on these words that I hardly know where to begin, so I won't, but there's no small wit in the way the company has named this product. Welcome, then, the Platinum Blonde.

A blonde, in its simplest form, is a big redhead, an open faced light with a reflector. Like the redhead, the blonde is undeniably a brute-force lighting instrument. On the upside, this means that the native efficiency of the discharge lamp at its core is maintained, without losses in fresnel optics, creating a point source suitable for casting sharp shadows which can be well controlled with barn doors. Many examples of both blondes and redheads use plastic shells. While attempts have been made to retrofit them with discharge light sources in the past, cooling problems have proven difficult to solve; Photon Beard seem to have finally managed it.

HMI remains popular because LED begins to lose the ability to compete, at least in terms of anything approaching a point source, at any power level beyond a few dozen watts. There's certainly nothing to compete with a 2kW tungsten light source in terms of sheer output. To be fair, there isn't really anything in a redhead-sized package to equal an 800W tungsten either, although the compromise in output makes sense for a potentially battery-powered redhead. It's therefore agreeable to find that Photon Beard has chosen to fit its blonde housing with Osram's mighty1200W HMI, meaning the output should be at least twice what the tungsten version can achieve and in daylight, too. 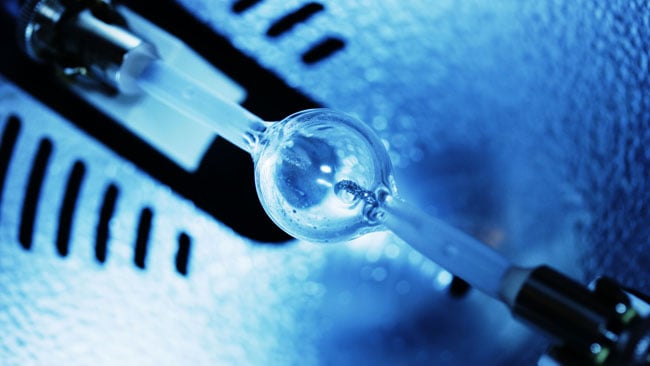 A brief primer on HMI lighting

HMI itself is a metal halide lighting technology developed by Osram in the 1960s specifically with the film industry in mind. Other manufacturers produce things with fundamentally similar performance, although there can be slight shifts in colour between systems. Many modern examples of this sort of technology are conceptually derived from the old-style mercury vapour lamp, the extremely cold white light occasionally still seen in venerable car parks and outbuildings, which looks bluish to the naked eye but cyan to cameras, due to its high green output. Everything from HMI to the ceramic metal halide lighting sold in industrial and retail markets is ultimately a mercury discharge light, although the technology has been developed enormously over the past few decades and the output bears little resemblance to the harsh and ugly light produced by devices of decades previous.

The difference is that HMI uses (compounds of) iodine to downconvert the powerful shortwave ultraviolet output of excited mercury into a broad white spectrum which matches daylight – at least, a summer noon in Los Angeles – with precision and an efficacy around four times that of tungsten. Our 1200W blonde, then, is equivalent to nearly five thousand watts of tungsten light and, critically, can be run from a domestic wall socket in most parts of the world. 1200W is a good choice because it is more or less the most powerful light that can be run without exotic power sources. The daylight output is also preferable, since daylight can be converted to tungsten with much lower losses than vice versa.

HMI is not an absolutely perfect technology. It isn't really dimmable (it will dim, but at some cost to lamp life and the colour drifts blue, so most implementations, including the platinum blonde, only offer a small amount of dimming). An HMI, like practically all discharge lamps, must be driven with an AC waveform, so that the two electrodes are alternately positively and negatively charged in turn. In early versions, this risked flicker, as the output of the lamp is modulated with the mains frequency, although modern electronic ballasts obviate this. Also, the output can drift slightly in colour as things age and there are problems with restarting a hot lamp, although that's something that can be solved in the electronics, too.

Many are familiar with the idea that a discharge light needs a ballast, a current-regulating device to prevent the electrically-motivated gas discharge from drawing so much current that the bulb fails. Photon Beard is using a ballast made by well-known UK manufacturer Power to Light. 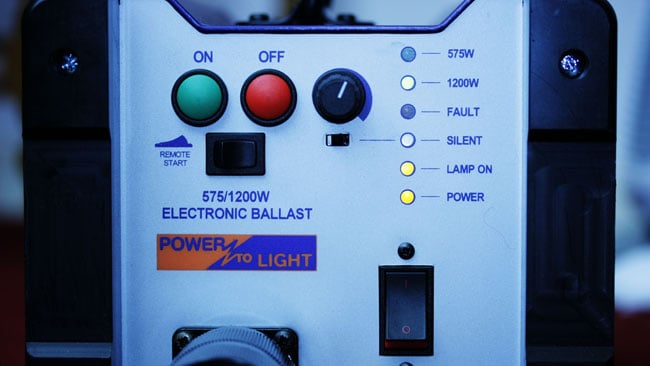 Practically all modern ballasts are flicker free at normal sync sound frame rates, although some of them use a high-frequency technique to facilitate high speed shooting, often causing the bulb itself to make acoustic noise. The Platinum Blonde's ballast has a 'silent' switch which disables high frequency operation, meaning that high speed shooting can use the mode less likely to cause flicker, but normal-speed shooting, where sound recording is likely to be more important, can use the acoustically quieter approach (most HMIs, including the Platinum Blonde, emit at least some faint buzzing sound while operating). Anyone proposing to shoot high speed material should shoot tests under the proposed lighting, no matter what the technologies involved, but the Platinum Blonde has the right options to ensure it remains useful in these scenarios.

A key requirement for an HMI ballast for the film industry is its ability to restart a hot lamp. This is difficult because the increased gas pressure inside makes it more difficult for the high voltage starting pulse to bridge the gap between the electrodes, creating inconvenience where there's a need to move or alter the wiring to a lighting device, but no appetite for the five to ten minute wait while it cools down. Movie ballasts work around this problem with brute force, using very high voltages – up to tens of thousands of volts – to start hot HMIs, which is usually quite effective. The Platinum Blonde behaves much as any other HMI, with the ballast occasionally showing some slight reluctance to start lamps which have been run for a long time then switched off in the last few tens of seconds, but counting slowly to ten and trying again is usually enough. Most HMIs have similar behaviour in this regard and this is not unexpected.

So, HMI as a technology, and thus the Platinum Blonde, has huge number of benefits: it features reliable, high precision daylight colour rendering and efficiency, as well as maintaining the small point source of a tungsten lamp (actually, smaller than a tungsten device of similar, or even somewhat lesser, output). LED alternatives, at least for the moment, don't offer small point sources or sharp shadows and are less easy to control with barn doors. If there's a downside, it's cost, simply because the ballast electronics and, to some extent, the bulbs, are special to application and not really used outside the film (and increasingly still photography) industries. In this context, Photon Beard's price of around £3000 plus tax for lamp, ballast and cabling seems very fair for the Platinum Blonde. There is no other HMI blonde for comparison, but something like an LTM CinePAR 1200 has vaguely similar applications and is the same sort of price...for the lamp head only. The Platinum Blonde therefore competes favourably and makes it more possible than ever for shoots which need the high output, efficiency and good colour rendering to have access to it.