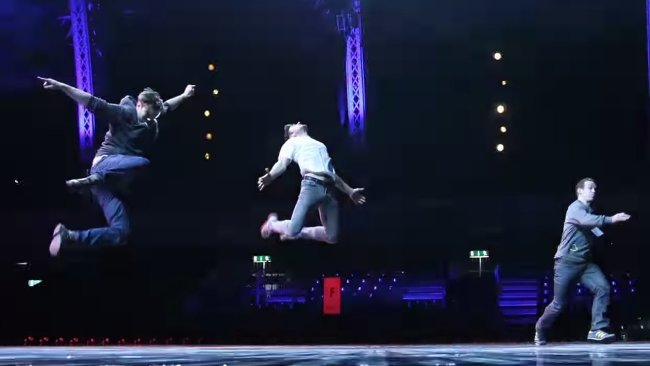 You can still get great use out of older DSLR models, especially if you have over a hundred of them...

2014 wasn't exactly a banner year for Canon when it comes to DSLR video innovation. Cameras from the likes of Sony and Panasonic brought 4K resolution and other significant advancements to the market at previously unheard of prices. Even Canon's much speculated 7D Mark II arrived as a 1080p shooter, although, to be fair, it did offer incremental improvements in other areas, such as 65 point dual pixel autofocus and full HD recording up to 60fps.

Of course, you really don't need the latest and greatest camera with the best specs to make something compelling. In fact, if you're Simon Byrnes of UK production house The Pixelist, you can make do with a Canon 1100D (that's the T3, for our US readers). And while one Canon 1100D is capable for many jobs, sometimes a job requires...more.

For the UK dance competition show Got to Dance, Simon used an array of 140 Canon 1100D's to achieve the famed bullet time effect first popularized by The Matrix. I remember the first time I saw Trinity rise into the air and go into slow-mo as we panned around her mid-kick. At the time, it was a mind-blowing effect. The decade and a half since the release of that Wachowski Brothers' sci-fi classic has seen countless bullet time sequences and videos by professionals and amateurs alike, from direct spoofs of The Matrix to sitcoms to commercials marketing all manner of products.

Yet, even though I've become somewhat jaded when it comes to this technique, it's still undeniably eye-catching when it's used on the right subjects. Dancers, with their agility and body control, make wonderful subjects for the bullet time treatment, as evidenced by this video:

Your money may be burning a whole in your wallet as you debate your next camera purchase. But there's something to be said for breathing new life into an old camera...or cameras.

Thanks to PetaPixel for alerting us to this video.