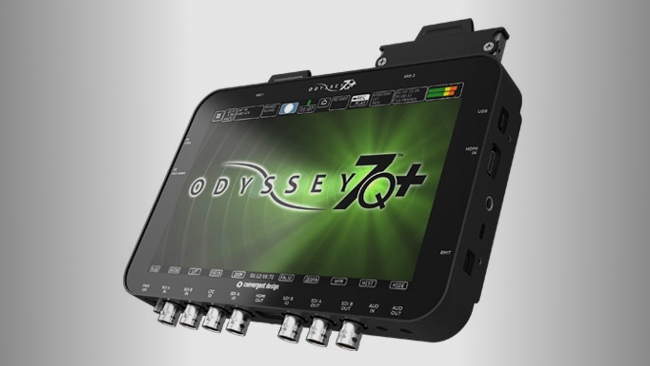 Convergent Design, the maker of the renowned Odyssey 7Q display/recorder that captures 4K over SDI, has announced that the new Odyssey 7Q+, featuring 4K over SDI and HDMI, has begun shipping. The company also addresses those that are unhappy about the arrival of the new unit, namely recent purchasers of the old model.

The introduction of the Atomos Shogun display/recorder, which captures Prores and Cinema DNG RAW 4K over HDMI, put real pressure on Converget Design to develop its own 4K HDMI input solution. Convergent Design released the Odyssey 7Q, its popular display/recorder sporting 4K capture over the unit's four SDI ports, a little over a year ago. Since then, two hot new cameras, the Sony A7s and the Panasonic GH4, were released that push out some form of 4K through their respective HDMI ports, creating a demand for 4K HDMI recorders.

Convergent Design answered that demand with the recent debut of the Odyssey 7Q+, which can record 10-bit 4K (UHD and DCI) RAW, uncompressed DPX or Prores through its HDMI input. Other than this new recording mode and the swap of locations for HDMI in-and-outputs, there are no other functional differences between the two recorders.

The good news is that the Odyssey 7Q+ is now shipping (to retailers, at least). But not everyone is jumping for joy.

You would think that news of another competing 4K HDMI recorder would be celebrated by everyone involved (with the possible exception of Atomos). But some of those who recently bought a 7Qs aren't so happy.

Convergent Design did not offer a buyback or upgrade program, so owners of the older Odyssey 7Q cannot retroactively turn their units into 7Q+'s. So, owners of the 7Q were left wondering if they were left stranded on the wrong end of the product cycle.

But Convergent Design is taking real steps to increase the value of existing Odyssey 7Q's, likely in the hopes of pacifying disgruntled owners. First off, the company extended the warranty of ALL Odyssey 7Q's to January 1, 2016, which adds up to an extra year of coverage for every unit already purchased. In addition, a recent firmware update adds that aforementioned Prores capability to the Oqyssey 7Q+, but also adds an HDMI record trigger and timecode support, 1TB Odyssey SSD support, multi-stream HDMI input, and expanded 4K recording options to Prores for the Sony FS7, FS700 and Canon C500 for both the Odyssey 7Q+ and the 7Q.

It's good to be loyal

As a sweetener to any owners of the Odyssey 7Q who wish to purchase the just released 7Q+, Convergent Design has launched a loyalty program that adds even more value to the older model, and possibly the new model as well. Those who decide to participate in the loyalty program will have their Odyssey 7Q warranties extended by an additional year to January 1, 2017 (that's on top of the extension for all Odyssey 7Q owners, so essentially two extra years of warranty). Anyone familiar with the Odyssey line of products knows that users must pay for certain 'Record Options'. Participants in the program will have all of their current 7Q record options duplicated on their 7Q+'s at no charge. And, if that wasn't enough to entice current owners to buy the new model, Convergent Design is offering $500 in credit coupons for use at the Convergent Design web store.

Why you should act now

Although current owners of the Odyssey 7Q may still be bristling over the lack of a buy back or equipment upgrade program, the benefits of this loyalty program mean that participants could conceivably have a 7Q+ with all their current 7Q record options, and still retain a 7Q with a much longer warranty, making it an attractive item for resell. Of course, if many Odyssey 7Q owners employ this tactic, the number of used Odyssey 7Q's for resale could jump considerably, which may drive down prices a bit, and therefore, the amount one could recoup on his or her initial investment on an Odyssey 7Q. So, if this loyalty program makes sense for you, and you don't have a pressing need for two display/recorders, then you would be wise to purchase a new Odyssey 7Q+ now and put that Odyssey 7Q and its double extended warranty up for sale as soon as possible, before the market gets cluttered with them.