A music video that relies on extreme edge detection 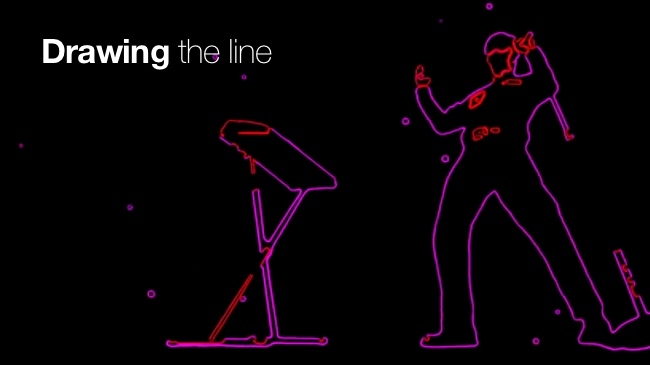 Here's a pretty extreme look for a music video. You've never seen footage from a RED Epic look like this. Find out how - and why - it was done

What happens when you push the controls on an effect panel as far as they can go?

Actually, in this music video, which throws away just about every detail except for the edges of objects and performers to give a retro, eight bit feel, the process was a log more complicated than that.

Hop Litzwire has written below about the genesis of this video and how it was made.

We suggest that you watch the video and then read about it, in the words of Hop Litzwire

First off, I guess I should say a few things about the band, because it has a bearing on the nature of the video.  BOBGOBLIN, or at least the three founding members, have been together for 20+ years, through major and independent labels and even under the moniker of a more pop-centric alter-ego, Adventures of Jet/AOJ (actually more successful worldwide than the original name and sound).  After the AOJ project and a few years of a creative break, we came back fully inspired to get back to the original BOBGOBLIN vibe and sound, which is by our own accounts a mix of old-school punk, new-wave, early 70's glam, perhaps a dash of prog, and a heavy dose of socio-political angst.

Nearing the completion of our first record in quite some time, we started playing with an idea that involved a very current topic....30-year-old arcade games.  Sarcasm aside, it was an idea I had toyed with 20 years ago...using the beloved games from our youth as an inspiration for more of our socially-conscious songs, to the point where the songs are barely related to the games, except in name.  And now, with our focus intensified and no label or group to really govern how out of date or silly our ideas sound - i.e., truly and happily independent - we started working on the classic arcade tribute EP, THRUSTER.  The first song out of the gate is a song named after the game Sinistar, and though the game is long out of date, the topic of the song (and in some ways the game) has been current since the creation of surveillance organizations and the idea of "Big Brother."  So in terms of the video, we wanted to get that conceptual element in there, while alluding to the visual vibe of a classic vector arcade game.

With a lot of time or a whole lot of money, the classic vector-game-look could be perpetrated to a "T" by the right people, but we're doing this ourselves, and I'm a TV Producer/filmmaker, cameraman, editor, effects compositor, composer for TV and film, songwriter in the band, record producer, performer, and father of two soccer and basketball-playing boys....so there ain't no time and not enough band fund to dedicate to this one video.  That means we're going to have to turn to plug-ins to do the heavy lifting for the desired effect if we want this to be a fairly expeditious process.

Even though I wasn't sure exactly which plug-in effects I would be using in the end, I knew that we would have to have a good outline of the band and the two actors to start the process properly.  I do have a Red Epic, so admittedly I had a head start on that process, as the element of noise is not as much of a concern as with some formats.  However, we were going to be using a GoPro for some shots to make up for the lack of fisheye lenses and for some quick takes, so that was a bit more challenging when it came to green-screen work.

Everything but the running shots were shot in front of a green screen at two different studios that we had access to.  Actually, one of the green screens was in an amazingly equipped library in Chicago; with guitar-player Tony Jannotta being in his hometown of Chicago while we were producing the video, he and his wife found the library as an option and worked together to capture the shots in front of the green screen there, corresponding with me during the session to make sure we had everything we would need.  No matter which green screen was used, as always it was very important to get full and even coverage of light on the green screen, and in this particular case it was important to blast the subject with light without too much concern for the dramatic effect of the lighting - I was mainly looking for outlines of the body and costume elements (we've worn uniform outfits with our chosen numbers since the band's creation in 1993, so seeing the numbers fairly clearly was important).

After shooting all the stuff, I brought them into After Effects  and messed around with available plug-ins and techniques for some time, settling on using Boris Continuum's Cartooner effect to get close to the vector effect I wanted.  I had to do some layering of the same shot to get it to act like I wanted, and I tweaked the parameters seemingly forever, but again having good green screen material was important, because even the cartooner effect will crap out around the edges if there is noise present.  For the final shots, I wanted to homage the star fields that were present in seemingly most early arcade games, so I added a basic particle layer behind everything, and I think that was key to the arcade game vibe while adding more excitement and movement overall to the video.  The Sinistar character (from the game) is a metaphor in the song for the increasing ineludibility of surveillance, so I added it to the layers throughout the video to carry that allusion from song to video.