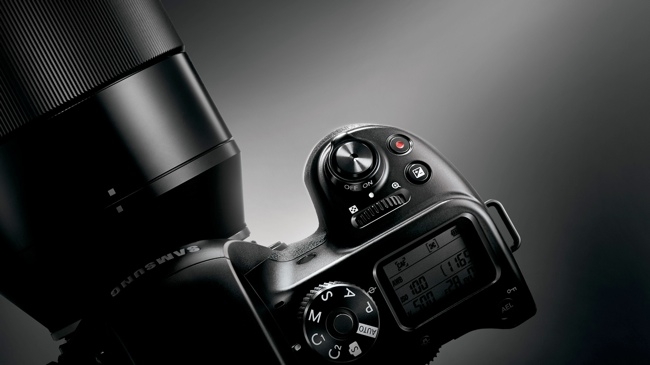 Andrew Reid on the Sansung NX1

Our friend from EOSHD, Andrew Reid, has reviewed Samsung's mirrorless 4K camera in a DSLR body, the NX1, and revealed some very interesting findings.

First off, many thanks to Andrew Reid of EOSHD for  his thorough review of the Samsung NX1, the relatively-budget friendly ($1599) camera that shoots 4K internally and packs a lot of wonderful tech in its body. Below, we're highlighting some of his most interesting findings and conclusions, and link to his original article for the full details.

According to Reid, the Samsung NX1's 6.5K sensor is similar to the RED Dragon sensor, and this interview with a Samsung rep is cited as the source. While Samsung did test that sensor with a 6.5K RAW sensor output at 240fps, this was apparently just for debugging purposes. The production-ready Samsung NX1 downsamples that full sensor on the fly to the desired 4K output (DCI or UHD), or HD, if that's what you prefer. But if you're expecting the same degree of dynamic range for the Samsung NX1 as the RED Dragon, think again. Remember, we are comparing two cameras several thousands of dollars apart. While the RED Dragon achieves around 16.5 stops of Dynamic range, the NX1 is more in the range of the Panasonic GH4. The Samsung NX1 does inch a step forward in sensor tech with a design that reduces crosstalk between pixels, which helps its rendition of colour.

Whether you're recording 4K in-camera (4:2:0) or going HDMI out (at 4:2:2) to a 4K recorder, such as the Atomos Shogun, the NX1 records in 8-bit, which is a limitation as compared to the GH4 that pushes 10-bit 4:2:2 4K out through HDMI. But Reid's hands-on evaluation suggests that the internal 4K recorded on the Samsung NX1 captures amazing images; in fact, Reid even calls the video quality "top notch" in good light, yielding "beautiful Canon / Nikon-like colour with the resolving power of the best 4K cameras."

Decent in low-light, but no Sony A7s

The Samsung NX1 is apparently a great performer between ISO 200-800, acceptable at 1600, and a mess at 3200. For those that absolutely need the extreme ISO performance of the Sony A7s (and those don't mind attaching a 4K recorder to your camera), the $2499 Sony A7s is still the budget champ, as its low-light capabilities exceed cameras several times its price. However, Reid judges that the Samsung NX1 fares better in low-light than the Panasonic GH4, which is an important point, as those cameras are in direct competition with each other as the only two interchangeable lens cameras that record 4K internally and have a DSLR form factor.

Why you should read Andrew Reid's full review on EOSHD

Reid really does a great job of breaking down the camera in terms of what's important to the end-user. He gives us some valuable information on H.265, the successor of H.264 and what will likely become the standard in compression codecs. Samsung's NX1 is the first consumer camera to record in H.265, which yields much smaller file sizes that its predecessor, but requires more processing power to encode/decode. Reid outlines his workflow, including a third-party utility that puts Samsung's own bundled transcoding app to shame. We won't reveal that tool here, but we strongly encourage you to visit EOSHD for Reid's full review, which is chock-full of this and other useful insights.

Samsung NX1, GH4 & others compared, via Andrew Reid of EOSHD