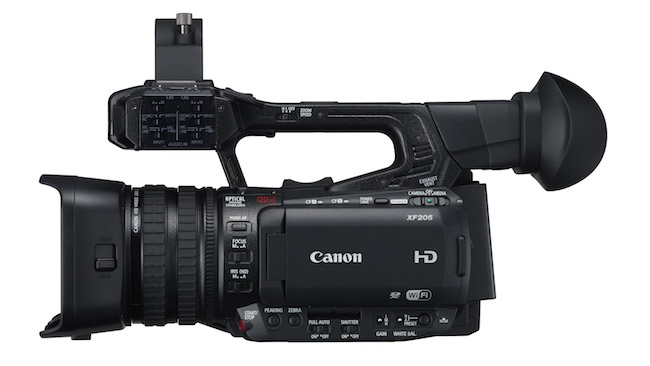 Phil Rhodes takes a detailed look at Canon’s much-heralded XF205 and finds much to like about the camcorder.

Camera design has turned a full circle. Initially, only large, heavy shoulder-mounted cameras could produce pictures suitable for broadcast. Handheld competition appeared in the late 90s and soon it became normal to see as many handycams as full-size devices in the average press pack. Recently, though, a need to differentiate products by adding additional features has provoked a gradual bulking-up of the traditional handycam form factor. On one hand, a solidly-built camera with a bit of inertia to it helps keep the wobble out of shots, but on the other hand – especially if it's the single hand that's supporting the camera – it's possible to yearn for the days when smaller, lighter, more pocket-sized devices were king.

Enter, with fanfare, Canon's XF205. It's been around for a few months now, but it's worth looking at in detail because it's lighter, and easier to get into difficult places than some of the bulkier compeition.

The XF205 is a camera with a single sensor of slightly more than HD resolution. This is presumably why it's smaller than, for example, cameras with a 3-chip head block. Given the more compact camera block and less complex optical requirements it’s possible to have a less bulky lens. While other cameras might have a more diverse range of codec and bitrate options, the provision of 50 Mbit/s MPEG-2 on the Canon will satisfy broadcasters.

The pictures from the single chip are fine, but the basic setup might need adjusting as the default is (to my taste) rather unflattering to the camera’s innate abilities and to the subjects being filmed, with a tendency to clip whites very hard (that I've long assumed is a fashion choice), but there are high-dynamic-range options going out to what the menus call “600%”, which fixes the whites. The resulting pictures have much better highlight handling, especially for such a small sensor.

There is, as on many similar cameras, the option to mechanically swing the infra-red filtering out of the way, which also automatically switches in a lot of gain. This mode would probably work best with active infra-red illumination as opposed to relying on it for night-vision style work. It would work well, for instance, on nature documentaries, where there's a need to shoot nocturnal animals without alarming them with visible light. 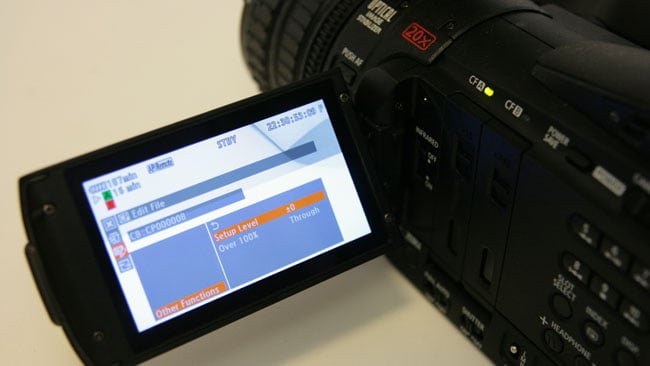 OLED video displays, now becoming more commonplace in high-end broadcast monitoring, are still fairly rare in cameras of this genre. The flip-out on the XF205 is an OLED, which is a choice provoking mixed opinions. In bright conditions it can be hard to see. On the other hand, it has superlative contrast and the potential to be very accurate, as well as consuming considerably less power than a TFT. An OLED display consumes power proportionally to the brightness of the scene, whereas a TFT constantly produces a full white display then filters it.  Perhaps for viewfinding, while OLED is finding its feet brightness-wise, there's an argument for a TFT, but it's good to see the new technology making inroads. 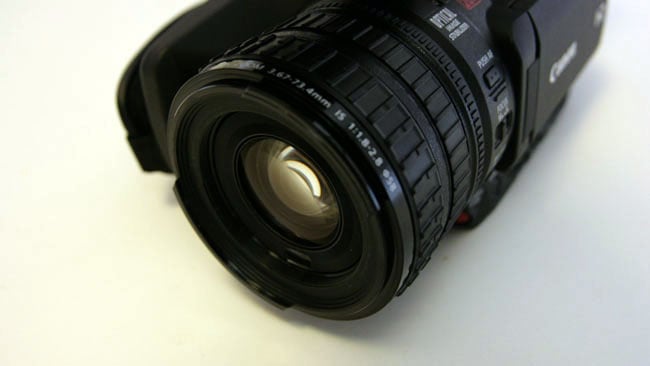 The 20:1 servo lens has a fairly positive-feeling zoom. This may be because the Canon isn't trying to move very large pieces of glass, or possibly it just has better servos, but I prefer it to many competing efforts which are often rather laggy. The wide end, crucial in handheld news and event shooting, goes all the way down to 3.6mm. Canon discuss an eight-bladed iris in the literature and this makes for nice round bokeh when used in the lens's macro mode, although this is ordinarily invisible unless the camera is carefully set up for minimum depth of field in a very deep subject. This is, to be fair, a newsgathering or documentarian's camera, where the need for things to be in focus is often greater than the desire for depth separation. The camera does offer face-detection autofocus, but though modern devices have elevated this to a level of reliability that's effectively indistinguishable from witchcraft, I probably wouldn't want to admit that a crucial shot had been missed because a nearby tree happened to look like a face. I kept it off. But it’s good to know it’s there if your shooting conditions would benefit from it.

The lens also offers five-axis optical stabilisation. The eyes of hoary old cameramen will be rolling at this, but in such a small, lightweight camera, with such little inertia to smooth things out, it's no bad thing. Used carefully, it's very effective, offering stabilisation of the longitudinal (roll) axis, as well as the more usual pan and tilt. This is important because disturbances in the horizontal and vertical axes can to some extent be smoothed out using a wide lens, but a rolling horizon can't. The XF205's stabiliser can help here in a way which is probably much more helpful, in the real world, than just stabilising pan and tilt.

At this scale of camera, it’s not always possible to retain the “conventional” control layout. While they're not all toggle switches, however, they are all pretty much in the right place. The menu system is controlled via a tiny joystick, which is a lot nicer than other approaches of providing a flat four-way keypad. It's also remarkably free of extraneous options. Things are simpler than on a full-size broadcast camera, of course, but there's all the usual basics plus reasonable freedom of image control, gamma, knee points, and so on. 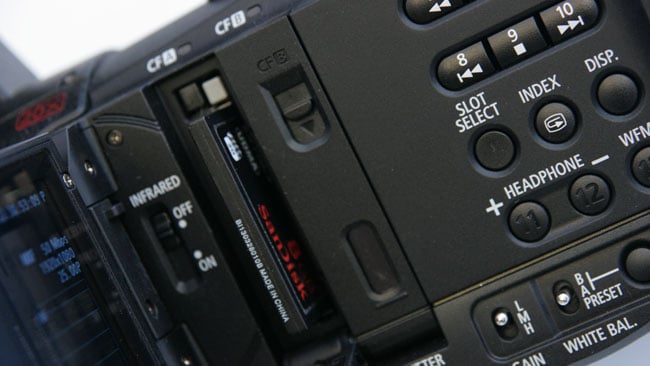 Having talked about camera, lens, and viewfinding, the only remaining subsystem to discuss is recording – and cue up the hallelujah chorus, because the XF205 uses commodity compact flash cards in its two slots. It's difficult to praise this decision enough. Even at the 64GB level (enough for two and a half hours of recording), compactflash cards are half to a quarter the cost of SxS, for name-brand product. The readers are cheaper. It's possible to buy both cards and readers easily at retail, worldwide. This is not the case for the other guys' format-'o-the-week approach to storage. It might have been nice to see a high-bitrate wrapper option other than the notoriously tricky MXF, though it imported cleanly even into the ancient Premiere CS5, and plays fine in things like VLC. Canon have also included a 35-megabit MP4 mode. Both codecs may be simultaneously recorded, providing backup or proxies as the workflow demands, and up to four channels of audio, including the two XLRs, the built-in microphone, and the mono mic connector, may be simultaneously recorded.

One particularly praiseworthy inclusion is an Ethernet port, which is an odd thing to see on a camera, but it makes available the same features as the wi-fi with a bit less hassle and without concerns over radio reliability. These are among the things I like very much about the XF205 - the networking, the commodity storage, the size and weight (at least for many situations), and the feel of the zoom. The viewfinder waveform monitor is nice - better than in some other cameras. The rather low power consumption of 8.4 watts laudable. Canon's 1:1 viewfinder zoom button operates quickly.

Overall, XF205 is a nice example of its breed.