Cinematography: What will Canon do next? 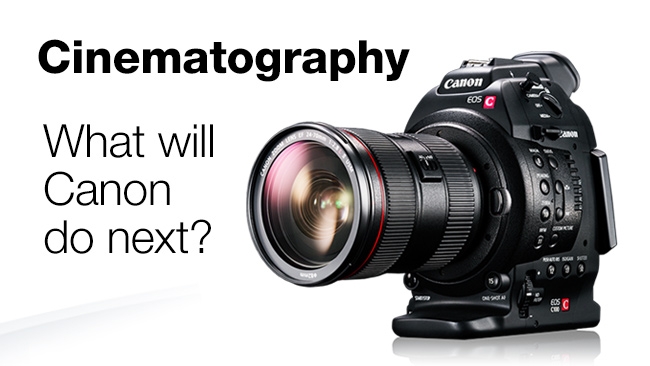 Cinematography: What will Canon do next?

We're just guessing here, but we just wondered what Canon might do next for video makers with its cinematography cameras

I just want to say at the outset that the following is pure, totally uninformed speculation, just in case anyone thinks we have any inside track on this. This is not even a rumour: it's a guess! But with that in mind, let's have a look at what Canon might be thinking of doing with their Cinema EOS range of cameras. The recent useful but not headline-grabbing upgrade to the C100 has actually made film makers speculate even more about what the replacements for the C300 and the C500 might be.

If you're going to play the game of guessing what Canon does next, you need to look at the whole context.

When the Canon 5D Mk II emerged in September 2008, it was the first Canon EOS camera to have video recording capabilities. And it was impressive. For a start, the images were progressive, at a point where most people were still seeing interlaced video, even at HD resolutions.

And that depth of field! Perhaps the biggest thing that made the 5D Mk II look cinematic. At this early(er) stage in the growth of digital cinematography it looked absolutely magical. Very few of us minded at the time that it was a bit soft and prone to moire, because that would be like complaining that the first helicopter rattled a bit.

It became a winning combination: cheap lenses (that the you probably already owned) and luscious-looking video.

But as more and more people engaged with DSLR photography, the limitations began to be seen in perspective, and, although the Mk III was a significant improvement, both the form factor and the limitations of a camera that was never designed primarily for video became a significant part of the reason why serious cinematographers have stayed with "traditional" cinema-style cameras.

For Canon, the success of their EOS still cameras as video shooters created a dichotomy: Should they continue to improve the video capabilities of their DSLRs, possibly at the expense of their well-established (and, you'd imagine, profitable) range of dedicated video cameras, or should they continue to engineer the DSLRs so that they made even better video?

To understand Canon's reasoning here you have to understand that still photography is by far the biggest part of Canon (imaging's) business. I don't know whether it's five or fifty times bigger but it is significant. Which means that video as part of a DSLR is between five and fifty times less significant to Canon than we probably think it is.

One tangible result of Canon's dilemma was the Canon 1DC, which is one of my favourite cameras.

I like it because it's a top end still camera that can shoot lovely-looking 4K footage as MJPEG. While this is not the most fashionable codec, it is almost universally compatible, and doesn't need any post-processing to put it to use right away. As someone who does a lot of still photography, but who works with video, this is a great combination for me.

But why did they make this camera? Probably as the ultimate embodiment of the video DSLR. The recently announced 7D mk II was rumoured to be "a bit like the 1D (x or c), which it is, in that it is heavily weatherproofed, but there's no sign of 4K, nor of any very significant upgrade to its video performance.

Other products are available

Amongst all of this you have companies like Blackmagic releasing a range of very low cost dedicated cinema cameras, and then niche operators like Digital Bolex, with their digital 16mm offering, the D16. The point is that whereas five years ago there was virtually no choice other than expensive dedicated digital video cameras, there is now an abundance of choice, at ever-decreasing prices.

So, given that Canon has strong, profitable dedicated video cameras, a range of three EOS cinema cameras, and video-capable DSLRs that they seem keen to update but only to keep pace with the requirements for still photography (and with any video improvements more likely as a side-effect of this rather than springing from a genuine desire to improve video performance as such), then what's their next move on the digital cinematography front likely to be?

Well, they've already played their hand with the EOS C100: it's more of the same, bringing it up to date and answering a few customer criticisms and requests but not pushing any boundaries.

I think it's likely that we'll see more progress and innovation when the C300 and C500 are revamped, and possibly redesigned.

Remember that the C300 was the first of the Cinema EOS range to be released. Launched with a strong marketing campaign, the results were impressive. This was Canon making the point that they knew how to make a dedicated digital cinema camera, and their experience with making sensors (very few manufacturers make their own) shone through.

The C100 was always an entry-level product but was good nevertheless and has found a role as a workhorse camera for many small production companies, and as a "B" camera for bigger ones.

The EOS C500 is the only 4K camera in the range, and the only one to offer raw footage, albeit to an external recorder. It's not what anyone would call cheap (especially when paired with the likes of an AJA Ki Pro Quad) but it does a very good job, and, compared to an ARRI Alexa, it's very cost effective.

So, what might the next iterations of these cameras be?

I would guess (and Canonrumors.com does too) that the C300 Mk II is likely to be 4K. It will, essentially take the place of the current C500, but we'll have to wait and see if you can get raw video out of it.

I would expect the C500 to remain at 4K unless it goes to 6K, and for it to be able to record raw video internally. As Canon Rumours suggests, it may also resemble the ARRI Alexa more closely in form factor.

I can't think of any reason why Canon shouldn't shoot for the top with the C500. It's always been pitched as a premium product (relative to the other cameras in the range) but I think now would be the time to take aim at the rock-stars cameras in digital cinematography, several of which are nearing their own next iteration, so the field will be more competitive than ever.

So that's it. Canon backing away from the idea of DSLRs pushing video envelopes, and a renewed Cinema EOS range moving upscale. Meanwhile, Canon's "traditional" professional camcorders will continue (we're currently testing an XF 205, which seems a very capable camera).

Remember - this is just speculation, but we hopefully won't have too long to wait to test it against reality!