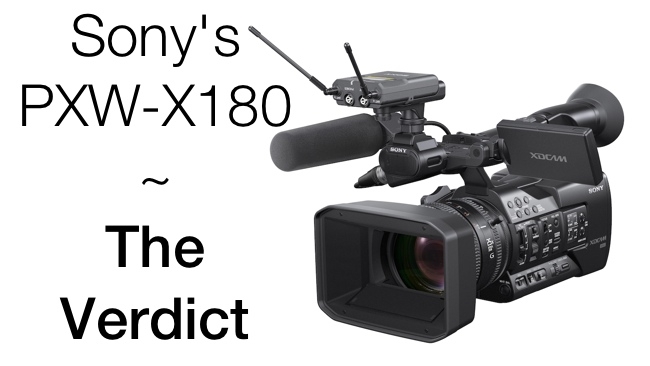 Red Shark Technical Editor, Phil Rhodes, gets to grips with Sony’s latest ENG-targeted PXW-X180 and finds a camera that will probably be purchased by the truckload with a surpringly good lens for its class.

Sony's PXW-X180 is a member of a rather particular class of camera, small compared to a full-sized shoulder-mount device, large compared to a domestic pocket handycam. It's the sort of device that's now very widely used in newsgathering, particularly local news or anything where extreme mobility is important.

This is an area where the company has enormous experience, but it's also an incredibly crowded market. Sony itself makes and has made many cameras aimed at this sort of work, with the PXW-X160 being essentially identical but lacking the wireless features (this might, then, serve as a review of that camera too). Because it's such a crowded spot in the market, any reasonable evaluation of the camera will rely on an analysis of some quite fine details, with operability, ergonomics and layout weighing heavily in our conclusions.

The company considers the X180 to be a replacement for the HVR-Z7 (an interchangeable-lens HDV camera) and HVR-NX5 (which records AVCHD). The X180 is immediately identifiable as a considerable step up on those cameras, offering the enormously superior XAVC-Intra codec for high quality work, as well as a plethora of codecs through various MPEG and AVCHD all the way down to standard-definition DV. Those considering an upgrade from the NX5 or similar cameras will be able to continue using their SD cards in an SxS adaptor to record AVCHD on the X180, although the higher-quality codecs require considerably more expensive SxS cards (even though moderately fast SD cards could happily handle the sort of XAVC-I bitrates produced by the camera). 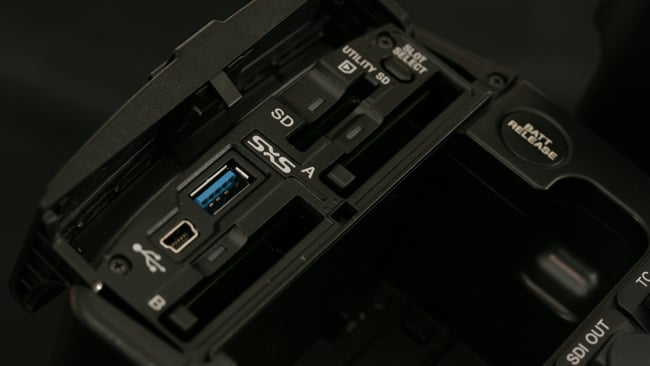 The little brother of SxS, the XQD card, can also be used with an adaptor. At the best possible quality, a 32GB SxS card holds about an hour of XAVC-I footage and the camera can hold two cards which may be used to extend recording time or create dual recordings in various configurations. There's also the option to insert a standalone SD card and record AVCHD proxies.

One notable absence from the camera's codec selection is the increasingly ubiquitous ProRes. There are SDI and HDMI outputs which might make external recording possible, but more or less the entire purpose of a range of cameras such as this is to provide a tidy, reliable integrated package and that's not a solution which will entice many people. XAVC-I is a good, solid codec, but many people will end up transcoding to either ProRes or DNxHD.

Either way, this smorgasbord of recording possibilities receives images from a one-third-inch, three-chip CMOS camera. Even high-end studio cameras with larger two-thirds-inch sensors are now using CMOS types and performance is generally good. The advantages of three-chip cameras are well enough known, but include constant sharpness regardless of the colour or saturation of the subject, greater depth of field for a given field of view (particularly valuable in newsgathering) and larger individual photosites than a single-chip Bayer sensor of the same size, for increased dynamic range.

To be completely fair, the ability to produce beautiful, painterly images is probably not a design priority for a camera like this – most users will be more interested in low noise, high sensitivity and the deep depth of field – but there are nevertheless there a lot of paint options in the menus, and it can practically shoot in the dark. One could happily shoot a short film on this camera and, with care, end up with cinematic results. Special features include the option to record up to 60 frames per second at 1080p and 120 at 720p, with a few caveats around the available codec selection and the reduced field of view, due to sensor windowing, in these modes. 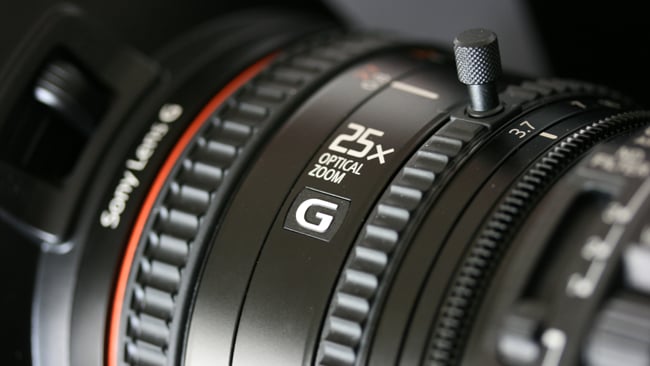 Moving forward again in the imaging chain, we encounter a crucially difficult aspect of moderately low-cost, small-sized cameras such as the X180 – the 25x3.7mm zoom lens. Optics to land an adequately sharp image on such a small sensor are non-trivial, especially a three-chip sensor with its more taxing optical layout issues and the need for a wide maximum field of view in ENG work. Conventional fully-mechanical designs such as those used for B4-mount lenses are much too expensive for things like the X180.

A good mechanical lens would be several times the cost of the camera - and a lens using servo-actuated focus or zoom must generally be used, with the caveats that implies. It's no hyperbole to suggest that the success or failure of the lens can make or break a camera like this for run-and-gun work.

Within these rather taxing parameters, then, the lens on the X180 is fairly good. There is an option to either lock the focus control to an indexed ring, or allow it to rotate freely simply by sliding the grip in and out. The necessary engineering compromise here is that the zoom is entirely servo-actuated and takes two or three seconds to move from end to end, so very rapid snap zooms can provoke a little tromboning as the operator overcorrects. It is impossible to love this aspect of the lens, although it would probably become easier in time, and it's no worse than the competition. The star feature is the short end, at 3.7mm, which even on a tiny third-inch chip produces a nicely wide field of view. For a small-camera servo lens, then, this is really pretty good.

So much for the main features. It's impossible, in the available space, to go over every switch and menu option in detail, but suffice to say that the layout is generally good, with real toggle switches in the right places for the key features. It does suffer slightly from the Sony smothered-in-buttons effect – the manual or servo zoom switch is hidden under the front right handgrip, for instance, possibly because there's not a square millimetre anywhere else for it to go. 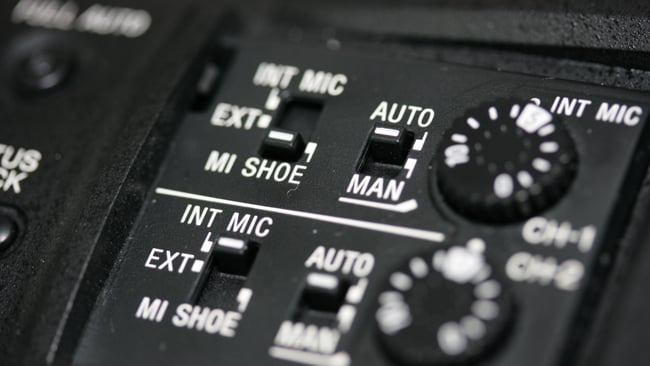 Another, more positive Sony feature is the hot shoe mount the company calls Mi-shoe. This is present on cameras such as the Alpha 7S where it's useful for things like the balanced audio input and phantom power module, but since these things are built into the X180, it's perhaps most likely to be used either for a light (with automatic switch-on when recording) or a radio microphone receiver. The URX-P03 receiver" sits neatly in a custom Mi-shoe mount and draws power from the camera. It sticks up a bit and gives the camera a slightly comical antenna-eared face, but it's exactly this sort of tidy, hassle-free integration that people are generally looking for when they buy Sony equipment.

The feature which headlines the X180 over it's little brother, the X160, is the inclusion of wireless connectivity. This provides both remote control of the camera and the ability to download proxy MPEG-4 files. The use cases for this are clearly quite specific but it might facilitate, for instance, quick field edits of low-bitrate material followed by a cellphone-linked upload to a broadcaster. It's an unfortunate reality that wireless ethernet is not a technology that's perhaps brilliantly suited to quick, on-the-fly field hookups, given the need to punch in twelve-digit IP addresses and a password, but Sony has sensibly included NFC (near-field communication) facilities for one-touch setup of a compatible cellphone or tablet.

Complaints are few. The rear-mounted viewfinder makes for an uncomfortable handheld operating position typical of this camera layout, especially as this is a bulkier example of the breed. Most people will probably use the flip-out TFT in those circumstances. The viewfinder, which would probably be of most use where bright ambient light makes the TFT difficult to use, is an OLED, so while it's probably dimmer than the TFT it's higher in contrast. Power consumption is around 20 watts, so the larger BP-U series batteries are required for run times of much more than an hour. The price gap for the wifi is perhaps rather large - £3500 or so for the X160, another £1000 for the X180 – and users would need a pretty good reason to pay for the wireless features as opposed to simply swapping out SD cards, but it's nicely integrated and works well.

This is the sort of camera that'll be purchased by the dozen for newsgathering operations, as well as freelance ownership. Perhaps the most memorable of its features is the lens, with the innovative push-pull mechanism for focus and dedicated rings for zoom and iris as well. Fixed servo lenses on small cameras have been improving for a while, and this is another very welcome development.