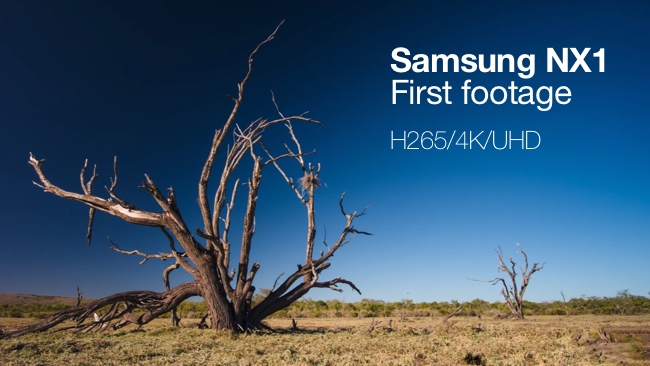 Samsung has ever so slightly stunned the world with its NX1 camera. Here's the first 4K footage we've seen

The Samsung NX1 has come out of the blue with an impressive spec sheet. It probably shouldn't have been a complete surprise because the "Galaxy" phone company has always been serious about cameras. It's just that, until now, they didn't necessarily tick all the right boxes for professionals.

And they probably still don't, to be honest. It's not people that make their living from shooting high-end films that this camera is aimed at. Rather, it's serious photographers and keen film-makers who want the most they can get for their money: people who want to make impressive videos without crippling expense.

We saw one in the flesh at Cologne's PhotoKina show last week, and it's a very nice design. But this is the first footage we've seen from it, and it looks lovely. We don't know yet what it's like working with the H.265 output but it's a fair bet that it will be best to convert this to ProRes or some other intermediate codec, as H.265 is very compute-intensive.

If you possibly can, watch the video in its highest resolution - even if you have to wait an hour for it to buffer. It does look very good but perhaps there's a bit of over-sharpening in there? It's certainly very sharp on my Retina Macbook Pro.

This is definitely a camera to keep an eye on!