Phil Rhodes on the Alexa 65 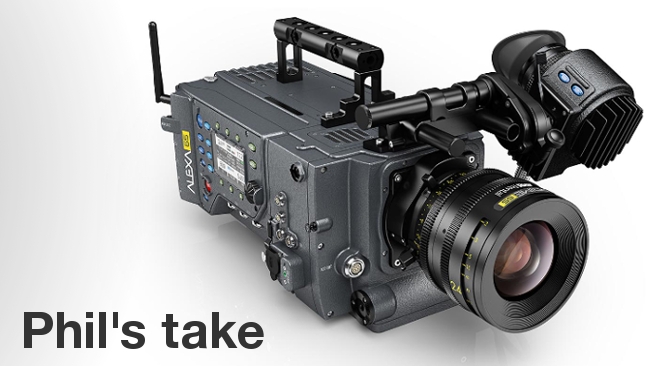 RedShark Technical Editor Phil Rhodes shares his thoughts on ARRI's announcement of its 65mm 6.5k Alexa 65, including why ARRI hasn't made a super35 4K camera, likely uses for the camera, and a quick run of the numbers.

Alexa, it's often opined, produces lovely pictures. Pictures so lovely, in fact, that it's successfully fought off competition from cameras with larger pixel counts, and is frequently the device of choice for historical productions such as costume drama, which might traditionally have been a shoo-in for analogue origination. There are all kinds of reasons for this: good basic sensor and offload engineering and, particularly, a healthy degree of oversampling. Even so, the success of Alexa as a 2K camera in a world of increasingly 4K cameras is pleasantly surprising. In the face of things like Sony's F65, though, with it's huge native resolution, and with other companies snapping at Alexa's heels with big numbers of their own, nobody was too shocked at the rumours back in April that Arri were pondering something with, to get right down to it, more pixels.

Arri's answer to the situation is not, however, just a 4K Alexa, which would presumably still be a super35-sensor camera with 4K or quad-HD ProRes recording. It's something considerably beyond that (it clearly isn't intended to be a direct Alexa replacement) and relies on Codex's recording technology.

The new camera is a giant-chip device with a specialist lens mount for specialist lenses. It's only a little larger than a conventional Alexa, but the chip size and resolution suggest that this new device is not really intended for everyday filmmaking, but for things like IMAX. I make that association in the context of proper 65mm-originated IMAX, not the current incarnation that can sometimes be not much more than really good 2K. Screens that big really demand more, and something like Alexa 65 would be an obvious choice in either that scenario or in the case of an upscale film, like the recent Hunger Games sequel, which also shot some real 65mm film.

From an engineering perspective, the design compromise is simple enough: bigger photosites produce better pictures, at least generally speaking, and Arri has been widely applauded for its staunch position against increasing pixel count on a super35mm sensor like Alexa's where doing so would risk an increase in noise and reduction in dynamic range due to the reduced sensitivity and full capacity of a smaller photosite.

Presumably, fundamental advances will eventually make 4K at super35 a choice that Arri feels it can live with, at which point even the staunchest supporters of 35mm – well, no, not the staunchest supporters, they're crazy, but you take my point – will probably be forced to admit that digital origination has slain the incumbent on at least a technical level. In the meantime, though, we have the choice of the 2K super35 Alexa, or, now, the 6.5K, 65mm Alexa 65 (although the 65's sensor is actually a little larger than the gate on an Arri 765).

In some ways this is a bit of inverterate pixel-peeping which could easily be invalidated by advances in basic sensor design, but given that most extant beyond-4K cameras have vastly smaller sensors, we can expect per-photosite performance that might even beat Alexa, even without basic changes in the electronics. And of course, there's an awful lot more photosites. One hardly dares contemplate the data-management implications of RAW recordings from this beast, even if only part of that sensor is recordable.

Enough of numbers, though. Naturally, for most of the filmmaking that's actually done in the world, a 65mm-style Alexa, as well as the crew and facilities to support it, will be a budgetary step way, way too far. The excitement over this announcement is probably out of all proportion to the number of these things which will actually be built and shipped. The option, though, is nice to have, and it'll be interesting to see what people do with it, and the sort of pictures it allows cinematographers to produce. It's not difficult to predict that Alexa 65 will, in the right place, be very difficult to surpass.