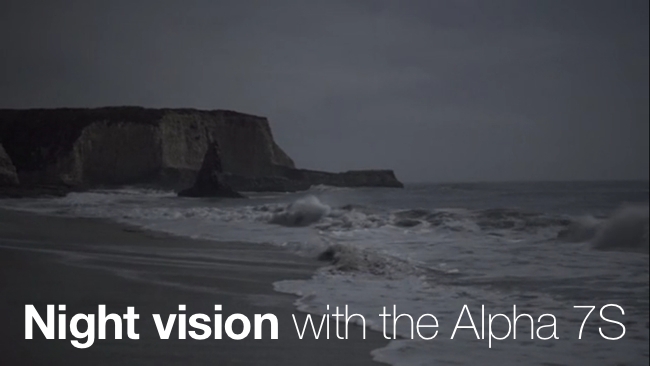 Night vision with the A7S

Moonlight and the A7S go together like Peanut Butter and Jelly. Here's the proof

The Alpha 7S's low-light ability is already the stuff of legend. We saw our first taste of it here and every since we've seen freelance video makers sporting this ultra-sensitive camera everywhere. It's clearly a very important camera for Sony and for the video-making community.

Some people have already talked about the sensitivity of the A7S in terms of "Night Vision", but it's not night vision like you're used to - this is in full colour.

Here's a short film showing the way the camera performs in moonlight. It's quite an eye-opener. You have to keep reminding yourself that this was shot at night!

The film is by Carbon Studios, and here are their production notes:

Our goal was to set out and shoot a short film that was lit entirely by moonlight. We waited for the moon to become full and on the night of September 8th we set out to explore the coast in California and see what we could find.

When we arrived at our location the timing couldn't have been more perfect! It was around 12:30 AM and the moon was barely lighting the beautiful beach. The entire shoot took place between 12:30 AM- 2:00 AM.

Our settings for the rest of the video were around 1/30th, f/1.4, ISO 12,800. To give you a perspective of how dark it was, there are a couple photos in the behind the scenes below.

We did not add any color grading, noise reduction, or sharpness.
All of the clips are straight out of the camera shot in the PP2 setting.

You will notice some purple fringing around the left side, The Metabones adapter that we rented had a light leak issue from what it looks like.

Sony has done an amazing job in creating this camera especially after seeing the quality that has come out of this camera.