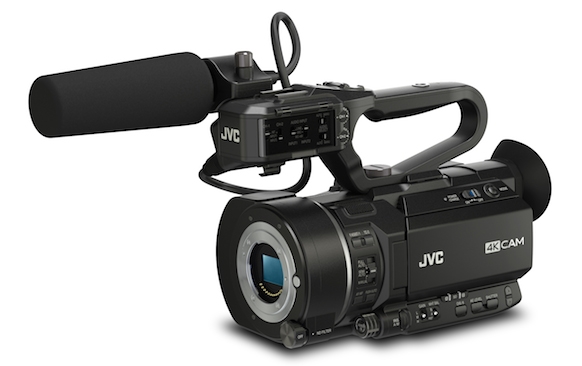 JVC proves that its NAB 4K camera prototypes are progressing along, with a hands-on IBC showing of its compact GY-L300 4K camera.

Way back at NAB 2014, (which, with all the cameras announced since then, seems like years ago), JVC showed off 4 camera prototypes, all featuring 4K recording and with the same Super35 sensor produced JVC's subsidiary, AltaSens. There was a large shoulder mounted camera with a PL mount, the GY-LSX1 (Code Name: Elysse), its MFT compact sibling, the GY-LSX2, and two additional two-piece models. JVC underscored the 'not ready for production' status of these cameras by putting them under glass, with a JVC rep stationed nearby to explain the cameras' features.

At IBC 2014, JVC's 4K prototype line-up shrunk from four to two, but there is progress, as the company demoed its compact 4K camera, the GY-LS300. This camera is actually the Super35 sensor, MFT, 4K recording GY-LSX2, but with a name change. The camera shoots up to 30fps 4K internally to SD UHS-I U3 memory cards. No word yet on availability, but if it's finally being shown off on sticks, it's probably not too far off...

And, what about that GY-LSX1, the shoulder mounted big brother of the GY-LS300? Well, it didn't get the full demo treatment, but I'm happy to report that there is a sign of progress. Instead of putting that prototype under glass, it was instead on a glass pedestal, albeit with a sign reading 'Do Not Touch." Baby steps!

Here's a hands-on video of the JVC GY-LS300 from KITPLUS, a YouTube channel that primarily covers news from tech shows. And don't miss the full list of JVC's IBC news on Page Two!

JVC is focusing on its current live streaming camcorders at IBC, with a presentation held each hour to fully demonstrate the outstanding networking capabilities of this range. Part of this presentation is a connection from the JVC stand to a field reporter, out and about in Amsterdam. JVC is also demonstrating a prototype of its new GY-LS300 Super 35mm sensor 4K handheld production camera, along with a number of 4K technology design concepts. And to further illustrate the fusion of traditional broadcasting with the internet, JVC is transmitting a live stream from its stand, allowing you to watch the main stage presentations online via www.jvcpro.eu/ibc2014.

A prototype model of the new GY-LS300 compact handheld camcorder is being shown at IBC, featuring JVC's exclusive Super 35mm 13.6MP 4K CMOS image sensor, developed by JVC's sister company, AltaSens, for 4K 24/25/30p recording. The camera uses Micro Four Thirds lenses, originally developed for DSLRs to deliver cinema-quality images in a compact camcorder, and also accepts a wide variety of stills and video lenses for filmmakers who have already invested in expensive lenses (converters available for PL-mount and other lenses). This first prototype has an advanced codec and onboard recording system, providing 4K imaging on standard SDHC/SDXC UHS-I U3 memory cards, and its dual codec system also delivers simultaneous recording and streaming for both HD/SD and HD/proxy files. The camera features the 4K CAM logo and marks the start of this new camera series from JVC.

JVC provided a glimpse into an expanding 4K future at NAB earlier this year, with new technology design concepts, and these models will also be on show at IBC. Signalling JVC's entry into the digital cinematography marketplace, the GY-LSX1 is a 4K shoulder-mount production camera equipped with a Super 35mm sensor and PL lens mount, which delivers full 4K imagery at up to 50/60p, as well as full HD imagery at up to 240p for super slo-mo applications. Equipped with a live 4K output and a host of recording options, this ergonomic camera sets the standard for next-generation professional acquisition. Like the handheld GY-LS300 camera, the GY-LSX1 features the new 13.6 MP 4K CMOS image sensor and records to SDHC/SDXC UHD-I U3 memory cards.

The new Super 35mm CMOS image sensor is also being integrated into a two-piece mini 4K camera system, the GW- SP100. This tiny camera produces beautiful 4K video, with 4096x2160 or 3840x2160 resolution at up to 50/60p recorded locally to SDXC UHS-I U3 memory cards. It has an interchangeable MFT lens mount system, chosen due to its very shallow flange depth, which offers the greatest flexibility to end users who have already invested in lenses. The design concept camera system features a video unit with a foldable and detachable 7-inch HD LCD monitor and offers the same IP capabilities as the GY-HM890 camcorder, with HD wireless video transmission and wireless camera control.

The mini 4K camera can also be attached to the MT-GB001 gimbal option; this may be used with a helicopter system for aerial shooting, with anti-shaking and anti-blurring technology ideal when used with a handheld system. So, while the mini 4K camera produces images suitable for cinematic applications, the system also has applications for broadcast news and could open a whole new world for broadcasters.

JVC and Zixi, an IP broadcasting company for cloud-enabled networking, have formed a partnership to push forward IP-based network video solutions for secure HD broadcast signal transmission. The first result of the cooperation between JVC and Zixi is an integrated IP broadcasting solution already included on the JVC GY-HM650, GY HM850 and GY-HM890 camcorders. On 12th September at 15:00, Gustav Emrich, JVC's European Product Manager, and Israel Drori, President and Founder of Zixi, will give a joint presentation at IBC Content Everywhere Cloud Solutions (hall 3 stand A19).

JVC has also joined together with Wowza® Media Systems, LLC, provider of Simply Powerful Streaming™ software, in their Works With Wowza™ partner programme. Together, JVC and Wowza will give content creators the ability to instantly stream video from live events including breaking news, corporate events, concerts and sports. With streaming capability built into JVC professional camcorders, joint customers can now stream over both GSM and Wi-Fi networks, providing powerful live video experiences while on the go.

Finally, JVC is running a promotion with STREAMSTAR, providing a free three-month trial of WEBCAST LiTE IP software, including the streaming platform, for all customers who own one of the GY-HM650/850/890 camcorders. This software will allow you to process up to four streams from your camcorders and transmit edited data live to a CDN network, and also review the results on the internet (up to 150 streaming hours per month in total across all users).

JVC is demonstrating its Near Eye Display design concept at IBC, which is a head-mounted viewfinder designed specifically for video production. Featuring D-ILA technology, the image produced by the Near Eye Display when worn is equivalent to an 18" 720p monitor at a distance of one metre. With exceptional stability and easy to adjust for comfort, the display can act as a remote viewfinder for multiple cameras. The JVC IBC stand also features a prototype production-style electronic viewfinder, the LCDVFe, along with a range of three new semi-professional LCD full HD displays for presentation or digital signage use – the PS-320/400/500 monitors (32", 40" and 50" respectively).

JVC is holding a press conference on the Saturday at IBC for members of the media (please email marketing@jvcpro.co.uk to register), where the company will introduce a number of products, systems and concepts. There will be an exclusive presentation by our new European President, Mr Hisao Kikuchi, and our European Product Manager, Gustav Emrich, who will provide an insight on many of the changes at JVC KENWOOD along with introducing key new products. We hope the press conference will give you a good headstart on our company's direction.