Opinion: Why I prefer to shoot film, even for digital delivery 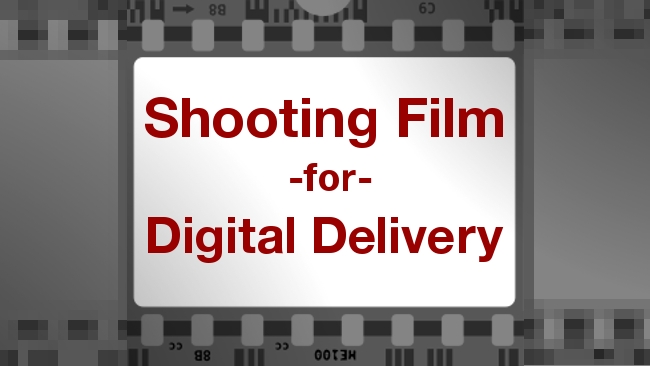 Guest author Pavan Deep tells us why he prefers to shoot film, even when editing and finishing digitally.

I prefer film. I always get accused of hating digital. I don't dislike digital; I just think that there is room for both mediums for artists to create and tell their stories with, rather than people pitting one against the other. I must admit that sometimes loading a film camera, dealing with the labs over payments for processing, and getting film scanned is too much hassle.

All I want is a simple way to create great images. Film is, however, my medium of choice, as I feel it gives me a better level of control and better images. I find the whole experience of shooting film to be quite 'meditative' and enjoyable. There's a seriousness about film, probably because it's been associated with professionals for so many years, who have always claimed exclusivity of film and perpetuated the myth that film is 'expensiveness', most likely to keep it within the professional domain. The seriousness of film exacts a more controlled and disciplined approach towards photography and cinematography, whereas digital is a somewhat less serious media and is part of our throwaway and disposable culture.

Why I shoot film & finish digitally

I often get asked why I shoot film, especially since I edit digitally and screen my work digitally, so in the minds of many I don't need to shoot film at all. This questioning coincides with the popular belief that if your intended final output is digital, then it makes sense to adopt a completely digital workflow from acquisition to exhibition. I tend to disagree with this analogy. I shoot film simply because I like to and so I do, but when I think about it, shooting "digital" on most projects is more expensive, as it requires top to bottom colour correction each and every time just to make the images look decent, and getting that "film" look is time consuming. The professional domain further complicates matters as there's the huge role played by DIT's and the enormity of data management. All of this makes the complete digital workflow a difficult and expensive route. In my experience, a hybrid system whereby one shoots on film and edits and exhibits digitally is easier, cheaper and gets better results. It seems whenever something is adopted by professionals, it gets more expensive. For instance, I didn't really look into shooting on 16mm film because it was a professional medium and most professionals were too keen to advocate its seriousness and expensiveness, but recently, as many TV professionals here in the UK are abandoning 16mm, I've discovered that it's not as expensive as I was led to believe.

There are many reasons to shoot film and there are many reasons to shoot digital, too. It is all too easy to assume that the big attraction towards digital for most people is the ease and the convenience of immediacy, as there was instant photography in the form of Polaroids well established by the second half of the twentieth century and even instant cinematography was introduced by the late 1970's, but neither was seen as a replacement for traditional film. I feel that perhaps the fundamental shift of this growing digital tide among independent filmmakers is really because of the ability to handle all stages of the process independently, from capture to processing, editing and even exhibition. Digital is known to be fast and easy, but you might well find that film is just as fast and easy to work with - I certainly do. The challenge with film usually lies in the developing and digitisation processes of film and here DIY skills may be handy in developing and scanning your own negative; surprisingly, both can be easily achieved.

Film & Digital: Which is more expensive?

I have often said that digital cameras are pretty expensive and unless you have lots of money, you shouldn't buy one. They become obsolete very quickly, as manufacturers of digital equipment are always releasing newer models. The lifespan of a digital device is typically very limited. Often, virtually new cameras begin to show problems like the unmentionable ‘dead pixels'. The lifespan of a film camera isn't really a factor, as even cameras from the 1940's can be used with modern film stock and produce stunning results. Some of the more expensive, top of the line equipment from recent years is now very affordable and will still last far longer than any digital camera. I feel we are at the very bottom of the pricing cycle for film cameras both in 16mm and 35mm formats and you might even find yourself making some money if you decide to resell your used film camera in the future.

The popular debates around digital and film seem to be whether film is better or digital is worse, often concluding with people saying that film has greater dynamic range, colour and depth against the digital imagery. For me, however, filming with the short runs of film, whether it's 16mm in 100ft loads lasting a little over two minutes or 400ft loads lasting just over ten minutes, make me think a lot harder before pressing the trigger. I become very precious about every shot and each shot becomes important. This, of course, means less wastage, a faster and more efficient working pattern, and (obviously l get) better results.

Anyone who uses Super 8 film is well aware that there are huge challenges when using this format: most cameras are old, buying film is expensive, but perhaps the biggest issue is that of processing Super 8, with many users having to send their exposed films abroad for processing.

Processing photographic film, such as 35mm negatives and slides, is not difficult at all and photographers routinely process their own films at home. Of course, processing black and white film is much simpler than colour film, but colour film processing kits are quite easily available and processing colour is not that more difficult. After withdrawing Kodachrome Kodak introduced Ectachrome 64T and then Ecktachrome 100D in the Super 8 format, both of these films used the E6 process for developing. E6 is the same process that photographers use to develop colour slides, so for the first time it was possible to easily process colour Super 8 footage.

I decided to process my own Super 8 film, rather than sending it abroad and having to wait for weeks for it to arrive. Naturally, the amount of chemistry needed to process one cartridge of Super 8, which contains 50 foot of film, was going to be different than processing one roll of 35mm still film. I had to work out the right amount of chemistry and, after some experimentation and trial and error, I eventually got the correct amounts to process colour reversal Super 8, and managed to get decent results. Despite this, I wasn't completely satisfied, mainly because I was processing films manually in the popular Lomo tank, and while the manual process is great, I found that I didn't always get consistent results from one reel to the other. I knew that to achieve perfect consistent results every time, the process needed to be automated. I looked towards the world of photography and discovered that there were several small and portable automatic film processors; these are mostly used by photographers and small professional labs.

I was most impressed by the small Jobo CPE and ATL processors, as these could be easily re-programmed and adapted to process Super 8. I built a rack to hold 50 feet of Super 8 film, which could be inserted into a standard Jobo drum, and then placed in the processor. The whole process was simple. I would load the processor with the chemicals, then automatically spool the exposed film onto my rack and inserted this inside the standard drum, placed in the processor and then just switched on and started the processor. After about forty minutes, the processor would stop and the film would be processed. Although I could only process one reel of film at a time, this was much better than waiting for weeks. The automatic processor simplified the process, but most important of all, I was getting very consistent results each time, which were as good as any professional lab.

I opened up a wider service offering the only Super 8 processing service using professional automatic processors in the UK. A major set back came when Kodak discontinued their line of colour reversal film. Though Kodak has released a colour negative film in Super 8, processing it is a bit tricky as there are two problems processing colour negative motion picture film at home, firstly the chemistry and the process is slightly different from standard still film. Secondly all colour negative motion picture films have a carbon backing called the Remjet. In the professional lab this backing is removed in a separate machine before the film is processed otherwise this can be very messy.