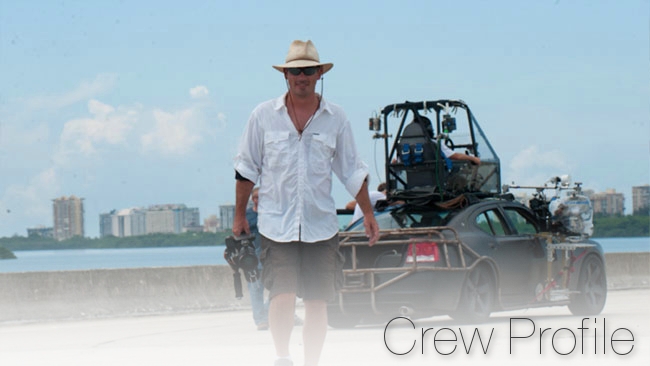 In this installment of our Meet the Crew series, we profile Brian Dzyak, a cinematographer that captures all the behind-the-scenes action on some of Hollywood's biggest films.

Film and TV work is tempting in various ways: the technology and technique, the craft of image-making, and of course the ever-popular very big explosions. But the idea that there are people making a living out of creating those explosions might, in many cases, have been planted by behind-the-scenes documentary footage.

I spoke to Brian Dzyak as he drove from Los Angeles across Texas with a carload of equipment. With experience shooting behind-the-scenes on productions such as The Bourne Legacy, The Dark Knight, State of Play, Inception, and the G.I. Joe series, Dzyak, perhaps surprisingly, initially had no intention of pursuing this sort of work. Having started out in television while at Bowling Green State University in Ohio, he shot "public affairs - not news, cooking shows, things like that."

Moving to Los Angeles in 1992, Dzyak "sort of fell into being an AC, and did that for ten or twelve years." With credits in the camera department on Star Trek: Generations, Broken Arrow, Titanic and Murder in the First, there was nothing new or surprising about the working environment of a film set when he began shooting behind-the-scenes.

Introduction to the role was, as is so common, by chance. "A friend of mine asked if I wanted to shoot a few days on SWAT. I could shoot video, I knew my way around a movie set, and I had a union card." Useful as his prior on-set experience was, Dzyak was initially cautious. "I didn't move to LA to do that. I wanted to work in the movies, on the movies. I didn't consider behind-the-scenes part of that. It took a while to realise that it was OK. I was even better off."

With only a couple of weeks involvement on most productions, and only one operator involved, it's clearly a difficult field to get into. Productions expecting higher DVD sales might budget for blanket documentary coverage, but ultimately "there are so few of us that do it, it's a very niche part of the business. There's not a lot of people are doing it on a regular basis."

Of the perhaps twenty days an average production might choose to employ a documentary cameraman, maybe eight will be used interviewing cast and above the line crew; that is, those people with creative responsibilities to the finished product. "They're hopefully going to schedule days with something going on. I'll try to get on-set when they think they're going to start shooting. If [the star] isn't going to be on set 'til ten, I'll try to get there a bit before it."

The usual ten-hour day can be stretched considerably by the changeover from tape to flash. "When I finish my day, I go back to the hotel and download. It can add an hour, hour and a half, to the end of the shooting day. Back in the day, I could shoot tape, mark it and hand it to a producer and be done. I don't think [flash recording] is saving anyone any time, it's just shifting it to somewhere else." Recording to Sony's SxS format, all-important archival security is provided by a backup kept on "a big G-drive. I use LaCie hard drives to send back and forth." While some might wince at the idea of sending traditional, spinning-metal hard disks through the mail, Dzyak reports that human factors remain a bigger problem: "Sometimes the producer will call and say he or she can't find something; that means someone back at their edit bay didn't transfer something right. But it's rare." 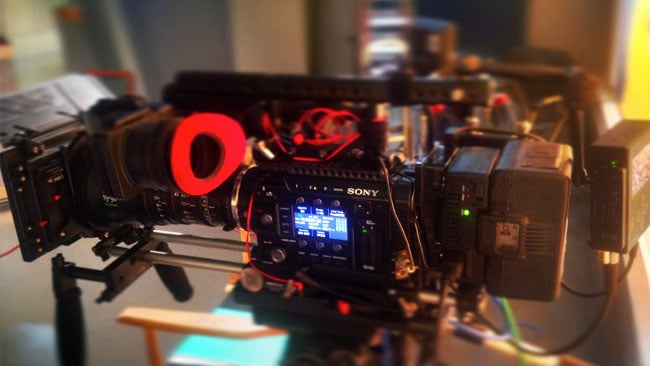 One area in which Dzyak doesn't skimp is equipment. With the combination of a Sony F5 and the Fujinon Cabrio 19-90 lens, he shoots with equipment that might easily be considered a main-unit configuration on anything less than high-end shows in the rest of the world. Balancing the weighty Cabrio with respect to the comparativey diminutive F5 requires rigging one of the larger of Anton/Bauer's Hytron series "with an adaptor, mainly to shove the battery back further." Dzyak avoids the Dionic series because of the difficulties associated with bringing lithium ion batteries of any reasonable size onto commercial airliners. Owning equipment is a recent development, though: "I started using [the F5] last September on Fast and Furious 7. I just bought my own in March. The problem before was that the vendors I was working for owned cameras, I couldn't own mine, it would have just sat at home." Otherwise, he carries a "small Arri lighting kit and a couple of GoPros." Borrowing equipment from the main unit is, apparently, poor form.

Varied work is, of course, always enjoyable, and jobs in behind the scenes photography on the higher end of American filmmaking are rarely predictable very far into the future. Says Dzyak, "On a bigger movie, I'll hear about it before, but usually a week in advance. Somebody might call today and say 'are you available next Thursday,' but often it's at a day or two's notice." This has its dangers, of course, but Dzyak has worked all over the world, and there's something slightly swashbuckling about the way we terminate our conversation amidst the fading cellphone signal of rural Texas.