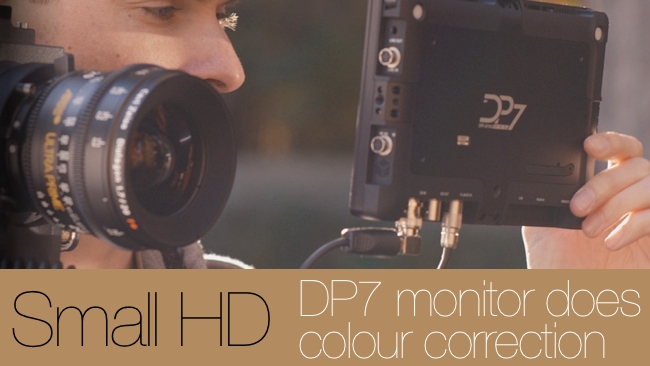 Until now, it's been either very expensive or impossible to monitor your video on-set with the correct colour "look". The new DP7 from Small HD solves this with built-in real-time 3D LUT (Look Up Table) capability - at a surprisingly low price

It's been quite some time since the ITU first published Recommendation 709, the standard which defines how luminance and colour are processed, recorded and displayed by cameras and monitors. Since then - and particularly since the ascendancy of digital cinematography - it's become clear that the provisions of 709 are really rather limiting, and many companies have begun to build cameras that use wildly different solutions to the problem of representing real-world scenes in digital images. And that's sort of a problem, because those many companies have, by and large, taken a variety of different approaches, with not much by way of standardisation, consistency or interoperability.

Almost simultaneously, the expectations for what we might call interpretive colour have grown enormously. Now Resolve is almost a consumer-priced product, the need for camera crews to understand what will eventually be done to an image is growing, not to mention the pressing need to manage the expectations of non-technical observers.

For both these reasons, we need monitors which are themselves capable of performing both technical normalisation and creative colour adjustments on incoming video. To date, there's been effectively two approaches: to route an SDI or HDMI image source through a device which is capable of doing this sort of colour adjustment, or to use a monitor with that capability built in. For some time, the Blackmagic HDlink, which is ostensibly a device intended to allow low-cost DVI or HDMI computer monitors to be used as SDI displays, was a favourite approach. More recently, Fuji have released the IS-Mini, an adjunct to their calibration and processing line which is capable of similar things (at least as regards colour correction) with SDI on both input and output. The grandfather of high-quality displays with integrated colour processing was CineTal, albeit at a price point really achievable only by the high end.

All of this makes SmallHD's NAB 2014 announcements particularly welcome. Their range of 7-inch displays, based around the already popular DP7, is soon to receive an update providing an on-screen grading interface, permitting owners of the conventional DP7, as well as the high-brightness and OLED versions, to make on-the-spot creative colour decisions. The user interface, using the company's neat corner-mounted rolling controls as well as the front panel pushbuttons, is naturally minimalistic given the circumstances in which it must work, but provides the usual controls as well as a display of the resulting curves. Resulting lookup tables are 3D, with hue rotation, and the monitor can not only save them to SD card to be perpetuated into the postproduction chain, but also impose them on its outputs for routing to other displays.

The only pity is that these are only 720p panels. Full-resolution, 1080-line versions are apparently soon to arrive, a development controlled mainly by the tablet and smartphone market for which the display panels in these devices are developed. A similar problem exists with provision of conventional, ENG-style eyepiece viewfinders, for which the only solution SmallHD has - in common with most of their competitors - is only a 480-line display, based on their 800x480-pixel, four-inch monitor. There is apparently an intention to do something about this, again, once the selection of a display panel can be made. It'll be interesting to see what happens in this field as more and more OLED panels become available.

The DP7 range starts at around $1300, with the accurate OLED version a little more. This is only fractionally more than the cost of a Fuji IS-mini, which doesn't include HDMI/SDI cross-conversion, a grading interface, or, frankly, a display. To say this is a good deal barely hints at the value for money on offer, and the firmware update to SmallHD's range of 7-inch monitors is certainly my pick of this year's show. Likewise, anyone who already owe a monitor capable of receiving the firmware update will justifiably feel as if they're in receipt of the deal of, if not the century, at least the best buy I saw at NAB 2014.