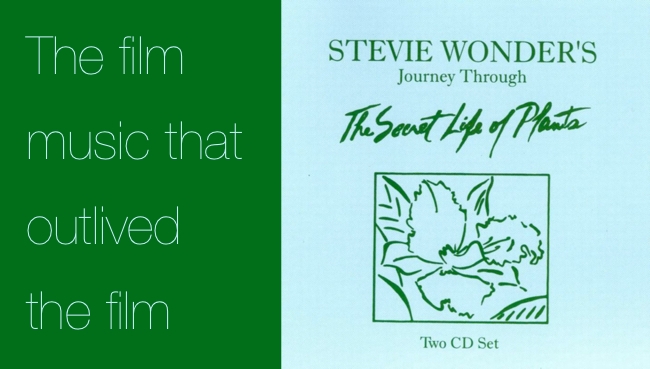 Stevie Wonder's not widely known as a film composer, but the follow up to his most sucessful album ever was a film soundtrack. Unfortunately the film sunk without trace - and not without reason!

I've been listening recently to "The Secret Life Of Plants" by Stevie Wonder. I'd forgotten about it but just rediscovered it on Spotify.

It was originally the soundtrack to a scientifically dubious film of the same name, but when the film went virtually unnoticed - perhaps withdrawn early when people realised the absurdity of the claims it was making - Wonder's record company released the double album as a much overdue replacement for the seminal Songs in the Key of Life.

Anyone wanting gritty song titles like "Living in the City", "Mistra know it all" and "Contusion" will be somewhat let down by "I wish that I could come back as a flower" and, more prosaically, "Tree".

And some of the tracks are unnecessarily rambling, amounting to little more than Wonder noodling on his keyboard, but Power Flower is pure genius, and Tree starts with a saccharine lilt that builds into an emotional climax.

It's worth remembering when you listen to it that the music followed the plot of the film very closely, all of which makes the sequence of tracks on the album sound disjointed and perplexing without the visual references. You can imagine the head-scratching that went on amongst Wonder's fans after the artistic and popular triumph of Songs in the Key of Life.

The album was one of the very first to be recorded digitally and it's tempting to think that at least part of the record's perceived "unworldliness" at the time of its release was due to the clinical clarity of this technique.

As for the film, it's hard to find copies, but there are many contemporary criticisms. Whether you think it's a good film or not depends how deeply you are into new-age woo.

One clip shows where a cabbage was wired up to an oscilloscope. When it "saw" a fellow cabbage being chopped in half, it displayed an intense reaction (in the form of an audible warbling sinewave). The film claimed that this "scientifically" proved that plants were aware of humans and each other.

Another sequence showed a "researcher" pointing a telescope at the stars and claiming that his seeds were communicating with other galaxies (with more electronic warbling on the soundtrack, this time not from Stevie Wonder's keyboards).

I haven't seen any scientific peer reviews on cabbages as audio signal generators so I have to say that I am moderately sceptical about these claims.

But this is a great album. Especially when you realise that Wonder has never seen a flower.

Listen to a track from the album after the break