4K timelapse. And some balloons. 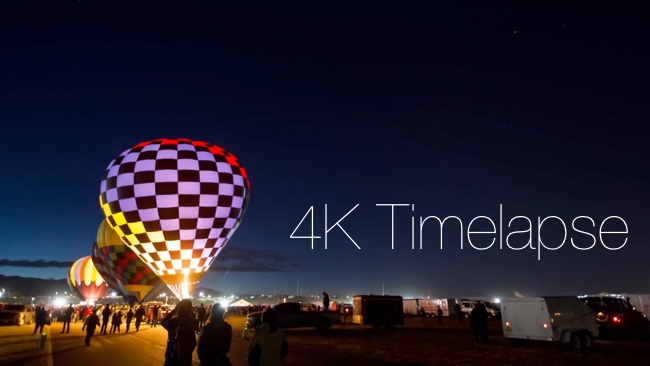 There are few sights more spectacular than the sky full of hot air balloons. Here's exactly such a scene, shot in glorious 4K timelapse

What many people don't realise is that if you have almost any sort of decent still camera, then you can make movies in 4K. there's only a small catch: you have to shoot in timelapse.

If you're filming a football match, this obviously isn't going to work well, but hot air balloons aren't noted for their jerky, unpredictable movements. Well, where they end up might be a complete surprise, but at least you can watch them drifting in random directions very slowly.

So, in this sense, they're ideal for timelapse.

And that means you can use a huge range of cameras to capture the action. What it does mean is that you'll have to work extremely hard taking all the individual frames and stitching them together, but, as you can see here, the results are absolutely worth it.

Production info and credits with the video over the page

You've never seen hot air balloons like this before! A couple of weeks ago, Albuquerque, New Mexico held its 42nd annual International Balloon Fiesta. It's a 9-day event where over 700 balloons see liftoff. It's the largest hot air balloon festival in the entire world and we were on hand to capture the action.

Turn the Volume up, HD on and enjoy this Balloon Fiesta Experience!
*if you are capable of watching in a higher resolution than 1080p choose original as this film was finished in 4k*

Beep.. Beep.. Beep.. The Alarm goes off at 4 am. Time to get ready for a morning full of hot air balloons! Eat a quick breakfast (maybe), grab the batteries off the chargers, cameras and warm clothes and head out for the field! This was my favourite part of shooting the Balloon Fiesta. The early morning anticipation running around the field in the dark trying to find the row of balloons that will go off for dawn patrol! The Balloon's will be all laid out on the ground and just as you start to see some light back-lighting the Sandia's mountains the first group of balloons start to inflate. The best pilots go up before the sunrise to find out what the wind conditions will be like for the day. They take off one after another into the dark of the morning. After that, it gets crazy.

Dawn Ascension is when all of the balloons (excluding dawn patrol) take off one after another starting just before the sunrise. There is so much to see and so many absolutely massive balloon's littering the field. Darth Vader's head fills and lifts above you. You watch it ascend into the glowing morning sky, surrounded by the hundreds of colors and shapes of balloons everywhere. In an impressively overwhelming way, 500+ balloons take off in the span of an hour and a half. When the field finally starts to empty, your heart starts to beat and you jump in your vehicle to chase after the still flying balloons. The balloons land anywhere they can in Albuquerque. From school yards, to back yards to the middle of the street, the whole community unites to pull the balloons from the sky and celebrate those rides of a lifetime.