The Secret feature of the F5/F55: interchangeable OLPF filters 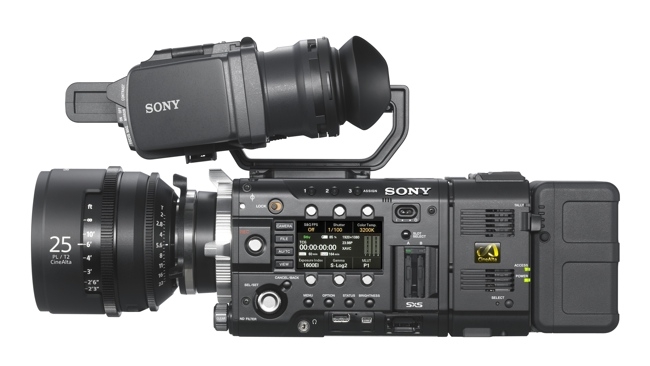 Who would have thought that a year after their launch, Sony would reveal a hidden - and extremely useful - new feature of the F5 and F55?

In with the announcement of the new firmware for the Sony F5 and F55 came news of a previously largely unknown feature of the cameras: interchangeable OLPF filters (or, strictly, OLP filters - but that's just being pedantic).

The idea behind OLPF filters is a bit like that of low pass filters in audio applications (in fact OLPF stands for Optical Low Pass Filter). OLPF filters sit in front of the camera sensor to smooth out artifacts that arise from high frequency detail. Problems such as aliasling or moiré that might become visible as strange patterns on detailed clothing or brickwork and the like. The camera will usually come with a special OLPF designed to match the sensor which is great until you find yourself shooting in a different camera mode that is sub-optimal for the OLPF filter.

For instance the OLPF that comes with the Sony F5 and F55 is designed for giving the best result from the full sensor at 4K, but what if you are shooting at 1080p or 2K instead? This might be a minor issue at 2K where the camera is able to directly downsample the footage from 4K, but is especially true when you are shooting high speed footage. In these modes the camera has to use techniques such as pixel binning (to throw away some of the un-needed data) in order to keep up with the pace of all those extra frames!

Sony has given us the answer with the option of a special OLPF replacement filter for these situations: a HD/High Frame Rate-specific OLPF for the F5 and F55. Now that the new 2.0 firmware is available for these cameras and they are starting to “fire on all cylinders” (with the new higher frame rates) Sony have chosen this moment to release the replacement OLPF filter to make sure that people can make full use of these extra modes without concern - thereby revealing their secret weapon that has been there all along.

How to swap out the filter

This is a simple matter taking a couple of minutes and could easily be done in the field. It's all a far cry from the rather nasty hacks people have attempted on Canon DSLR’s which require taking the camera apart completely: definitely not something you want to be doing in the field.

However, not only are the OLPF filters on the F5/F55 easy to swap out but the feature has even been designed such that the camera is able to detect which filter is in place on the camera at any one time! Nice. 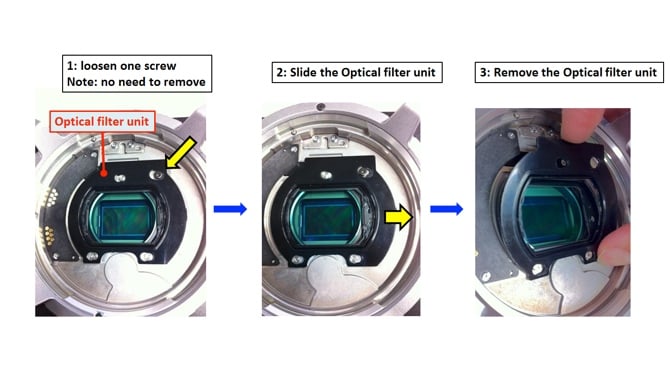 The fact this feature exists may lead to the possibility of a clear glass filter becoming available (perhaps from a third party if Sony isn’t up for it) so that you can use the camera without any anti-aliasing filter at all (but you would need clear glass to maintain the integrity of the optical path). Such a null filter would allow you to maximise the resolution but would really leave you at risk of artifacting. But Maybe that’s a risk you are willing to run with to get that extra bit of sharpness?