The Blackmagic Cinema Camera and the art of Bicycle Music Videos 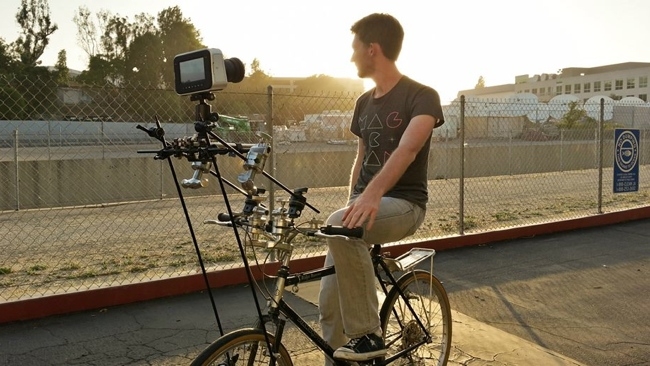 How to make a video "selfie", while riding a bike, while singing, while making a music video, with a Blackmagic Cinema Camera

Nick Roberts is one half of the indie-folk duo, And the Giraffe. The band is based in Nashville, TN and released their second EP, Creature Collector, in November, 2012.

As an independent band, we have to be very careful when it comes to costs and time constraints for just about all of our artistic endeavors. After tossing around a few different ideas for a music video to accompany an album we had recently released, we decided on filming our band riding around Los Angeles with a camera pointed towards the riders’ faces as opposed to pointing in the direction the bike was traveling. The goal was to give a fresh perspective on a relatively “regular” activity, and with the help of our good friend and director, Harrison Sanborn, we were able to make it happen.

Because bicycles aren’t designed to have 40 pounds of camera gear resting on their handlebars, we had to improvise a way to get a film camera onto a bicycle without the image wobbling and looking as though we were riding through the Rocky Mountains, as well as not toppling the rider, bike, and expensive camera setup onto the unforgiving Los Angeles pavement.

That’s where the Black Magic Design cinema camera came in.

Both the weight and size of the camera made it the perfect candidate to mount to the front of the bicycle we would be riding. Additionally, the BMDCC has a much better image than a standard DSLR of about the same size, so the choice to use it seemed obvious.

After the camera was decided on, the challenge of getting it mounted to the bicycle in a safe and unobtrusive way was much harder. A few phone calls to camera rigging rental stores in the area proved fruitless, given that most bicycle rigging kits rented for a few hundred dollars per day. Our $200 budget had already been spent on a uHaul van and bicycles for us to ride in the video, so renting the equipment necessary to build the perfect rig was out of the question.

Back at our director’s apartment, we scoured the garage for some spare aluminum rigging rods that we fastened to the bike with clamps. The jerry-rigged camera mount worked perfectly in a test run, but to increase image stabilization, we made tie-down straps out of strips of duct tape and strapped the camera to the bike’s frame.

We shot the video over the course of 3 days in and around Los Angeles and drove a few hundred miles to the northeast of the city to the Coyote Dry Lake bed to capture the ending sequences of the music video. Although we had the BMDCC on hand for the entire shoot, we ended up using a Sony F3 to film the last 30 or so seconds of the music video.

Our director, Harrison Sanborn, did an amazing job with our incredibly limited budget and we couldn’t be happier with the results. It was one hell of a week planning and shooting everything and the Black Magic Design cinema camera exceeded our expectations in both form and function.

Video is after the page break.