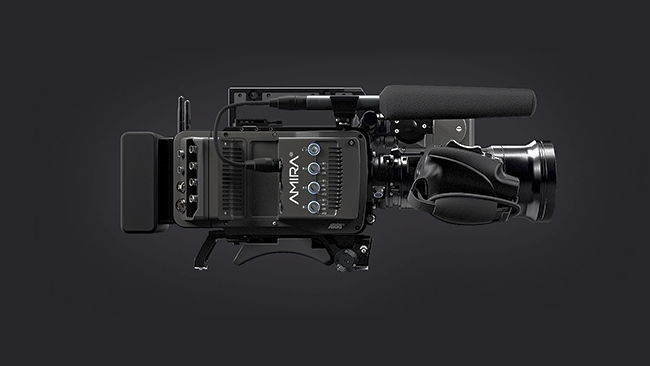 I spoke to the ARRI Amira product manager for the new camera to confirm a few things. While some of this is available from ARRI's website, I just wanted to go over the most important things here

Markus Duerr is ARRI's product manager for the new Amira and I wanted to just clarify a couple of points with him. This is not an exact transcript - I'm paraphrasing him.

How is it different from an Alexa?

It's different in that it's designed for one-person operation. It doesn't have the same expansion options as the Alexa and it's missing the ability to be remote controlled. It can only record to ProRes: there's no raw option.

How is it similar?

It has exactly the same sensor.

What flavour of ProRes can it record to?

What's it going to cost?

Less than the Alexa

When's it going to be available?

The camera itself feels quite heavy, but nicely balanced and while anyone used to significantly lighter cameras might find it a bit bulky, it's still quite managable. Choice of lens will affect the bulk as well.

Marcus told me that the camera is aimed at documentary makers and lone-camera operators. It's quite obviously at the top end of the scale for this sort of use, but this is where it's pitched, as opposed to digital cinematography.

We'll see! My feeling is that whatever the designers had in mind for this camera, it will be used as a cheaper way to get that "Alexa" look. It may not have raw, but ProRes 444 is a pretty decent way to get pictures out of this device, and it's a vastly simpler workflow than raw anyway. ProRes grades very well and ARRI may well find they've hit a sweet spot with the Amira between usability and quality.

Video: Marcus Duerr talking about the Amira after the break