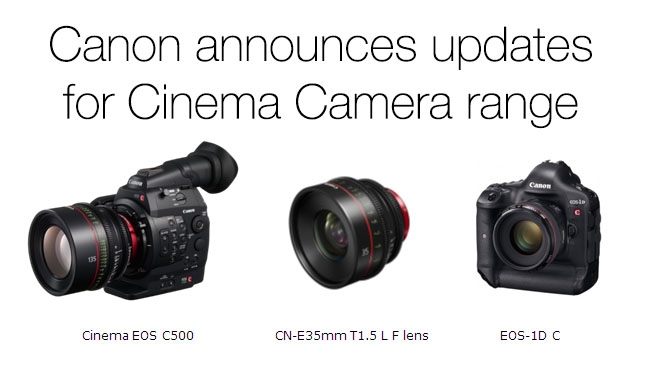 Canon have announced firmware upgrades for their EOS Cinema Cameras which bring new levels of sensitivity and different colour gamut options. They are also adding a new cinema lens to their range

Full details are in the press release:

United Kingdom, Republic Of Ireland, 04 September 2013 – Canon, a world leader in professional imaging technologies, today announces a host of feature updates to its ground-breaking range of Cinema EOS cameras, as well as the launch of a new 35mm EF Cinema prime lens. The announcements are the latest developments in Canon's rapidly-developing professional video portfolio, and will offer even greater creative freedom and added value to video professionals.

Developed in response to market feedback, the feature upgrades and new lens have been designed specifically to meet the growing creative requirements of modern video professionals. The updates will offer greater creative flexibility and enhanced operability, and clearly demonstrate Canon's continued commitment to supporting the ever-evolving needs of the professional video community.

Unrivalled low light flexibility with ISO 80000
Canon's heritage in camera and sensor development led to the creation of a brand new Super 35mm sensor for the Cinema EOS system, offering outstanding performance in extremely challenging low light situations. Now Canon is further enhancing the maximum ISO setting on the EOS C500, EOS C300 and EOS C100, from the current maximum of ISO 20000, to ISO 80000. Unrivalled in the industry, the new maximum setting will allow creative content makers, such as documentary, news and feature crews, to shoot in even more extreme low light conditions, capturing detailed, colourful images. Users will be able to shoot in 1-stop or 1/3 stop increments from ISO 320 right through to ISO 80000, providing incredible creative freedom.

Additional enhancements to the Canon EOS C500
A number of additional feature enhancements will be applied to the EOS C500 following user feedback, particularly with regard to cinematic and drama productions.

The new firmware updates will offer professionals using the EOS C500 the ability to shoot using wider colour gamuts. In addition to the existing BT.709 gamut, new DCI-P3+ and Cinema Gamut options will be added. DCI-P3 is an established colour space for digital cinema projection, and DCI-P3+ will allow the EOS C500 to fit seamlessly into workflows designed for such a delivery system. DCI-P3+ captures a wider range of colours but cannot account for all of the colours that current sensor technology can capture, so the new Cinema Gamut will provide an even wider colour space. In addition, it will be possible to apply a BT.709, Wide DR or DCI-P3+ LUT to the outputs from the MON.1/2 terminals, increasing monitoring options on-set.

High speed options in the EOS C500 will also be expanded, further increasing the flexibility of the camera. A new 4K1K RAW mode will be added, providing the option to shoot at up to 120fps. Unlike the existing 4K2K HRAW mode, in which additive processing is used to create a final image of 4096x2160 pixels when recording at frame rates above 60P, the new 4K1K mode will utilise a cropped portion of the image sensor. Capturing a more cinematic aspect ratio of 4096x1080 pixels, this new option will reduce the risk of aliasing, or 'jaggies', in the recorded image. 4K2K HRAW will remain as a shooting option.

The firmware updates will also provide further support for use of the EOS C500 in productions that utilise an ACES workflow. Aiding on-set monitoring, it will be possible to output a 2K signal from the MON.2 terminal which conforms to ACESProxy10 gamma and the ACES colour space. When combined with suitable monitoring equipment it will become possible to monitor an image in ACES colour on-set.

To counter heat generated when filming for long periods of time, especially in 4K or 2K, the EOS C500 has an effective fan-based cooling system. To reduce the possibility of intrusive fan noise during shoots, the Automatic cooling mode has been updated so that the system will stop running during recording. It will automatically start to regulate the camera temperature whenever recording stops, providing more sustained, continuous cooling to reduce the chance of fan activation during a take. Automatic activation during recording may still occur if required to prevent a camera dangerously over-heating.

Additional enhancements for EOS C300
Building on the ease-of-use upgrades announced earlier in 2013 for the EOS C300, Canon is introducing a range of further updates which will enhance camera functionality for solo shooters, including the addition of Wide DR gamma. First introduced in the EOS C100, Wide DR offers the 12 stops of dynamic range available when shooting in Canon Log gamma, but produces a less 'flat' image which does not necessarily require post-processing or colour grading. This is particularly useful for film makers working on tight schedules or with limited financial resources.

Additional enhancements for EOS-1D C
A self-contained 4K camera, the EOS-1D C will also benefit from feature upgrades in 2013, further enhancing the performance and versatility of this unique device.
Utilising Canon's EF lens mount, it will become possible to display current aperture (f-number) when shooting with Canon EF Cinema lenses, and to store lens metadata. Furthermore, EF Cinema lenses will be supported by the Peripheral Illumination and Chromatic Aberration Correction functions, improving overall image quality.
In response to user requests, audio has also been enhanced. Currently audio recording is limited to a mic input, but the forthcoming update will permit selection of Line or Mic, allowing use of an external audio source if required.

Enhanced flexibility and operability across the range
Canon will also improve the operability of the EOS C500, EOS C300 and EOS C100 in a variety of ways. For example, the Magnify function, designed to aid manual focussing, will be enhanced to enable magnified viewing of 25 different segments of the image in view, rather than just the centre portion. A new option will allow users to lock all camera functions, including the REC button, when the Power switch is in LOCK mode, and it will be possible to assign either ISO or IRIS control to the main body and hand grip control dials on the EOS C500 and EOS C300.

Enhancements to the Wi-Fi remote control for the EOS C500 and EOS C300 will mean that two users can access a camera at the same time – allowing one to control the shot while the other inputs metadata, improving post production workflow. In addition, the EOS C300/C300 PL and XF300 and XF305 will gain GPS support via Canon's GPS Receiver GP-E1, allowing GPS information to be automatically recorded with video footage.

Peripheral Illumination Correction will also be expanded in the EOS C500, EOS C300 and EOS C100, with a range of additional EF-mount lenses being supported. This function can help to ensure maximum image quality by reducing shading that may occur in the corners of images.

An update to the XF300-series will also see the availability of a new lens hood with built-in lens barrier and the addition of a digital tele-converter function.

Canon EF Cinema prime CN-E35mm T1.5 L F lens
The launch of the new EF CN-E35mm T1.5 L F lens enhances Canon's existing range of EF Cinema primes to a total of six lenses. The lens has been designed following strong demand from Cinema EOS users, and features a compact design that combines Canon's acclaimed optics with fast performance – making it ideal for shooting in challenging low-light conditions. Ensuring consistency when shooting across a number of different Cinema prime lenses, the new 35mm lens provides colour reproduction that matches others in the range, as well as featuring the same form factor and uniform markings, making it easy to switch between lenses when on a shoot.

The firmware updates for Cinema EOS cameras are expected to be available in Q4 2013, with XF-series updates arriving in Q1 2014.