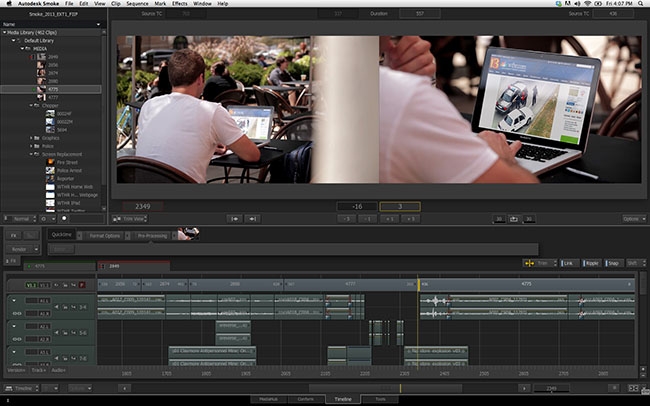 At this year's NAB show in Las Vegas Autodesk announced that they were working with Blackmagic Designs to add support for their video I/O cards in Smoke 2013. It looks like that support is going to be here next week.

When Autodesk released Smoke for the Mac platform it was a huge change from previous versions. Up until then Smoke had only been available as a turnkey package running on SGI or Linux hardware and was sold at an eye-watering price. The Mac version is available as software only at a price of just $3495 (plus $675 annual subscription if you want support and uprades), bringing the capabilities of Smoke within reach of mere mortals. However, if you wanted to be able to capture or playback video from Smoke you had to use AJA I/O hardware, as those were the only models supported by the software.

Autodesk have just announced Smoke 2013 Extension 1, to be released as a free upgrade on May 29th, which will include support for the Blackmagic range of video I/O devices including the Decklink, Ultrastudio and Intensity products. Not only does this provide more choice for the user in configuring their system but it also makes it easier to have a workstation that can run Smoke together with DaVinci Resolve.

"Since launching Smoke 2013 in December, the Smoke development team has been forging full steam ahead with rapid and frequent iterations bringing new and improved functionality into the software, Community feedback has been tremendous, and with this Extension release, Smoke will now include two highly requested features – Blackmagic video card support and a powerful new set of trim tools."

The new trim view can be seen in the image above and it certainly looks like it will make it easier to see what's going on when trimming.

Smoke is an editing system with an incredibly deep toolset for compositing and animation in a true 3D environment, including being able to bring 3D models, cameras and lighting into your timeline, the learning curve is very steep but once you master it there is almost nothing you can't do. As an accredited Smoke trainer myself I am amazed by what is possible and enjoy seeing my students as the penny drops and they realise they can do things in one application rather than jumping between different packages.

You can download a 30 day trial version of Smoke from the Autodesk website here, but I warn you, 30 days is barely enough time to scratch the surface.