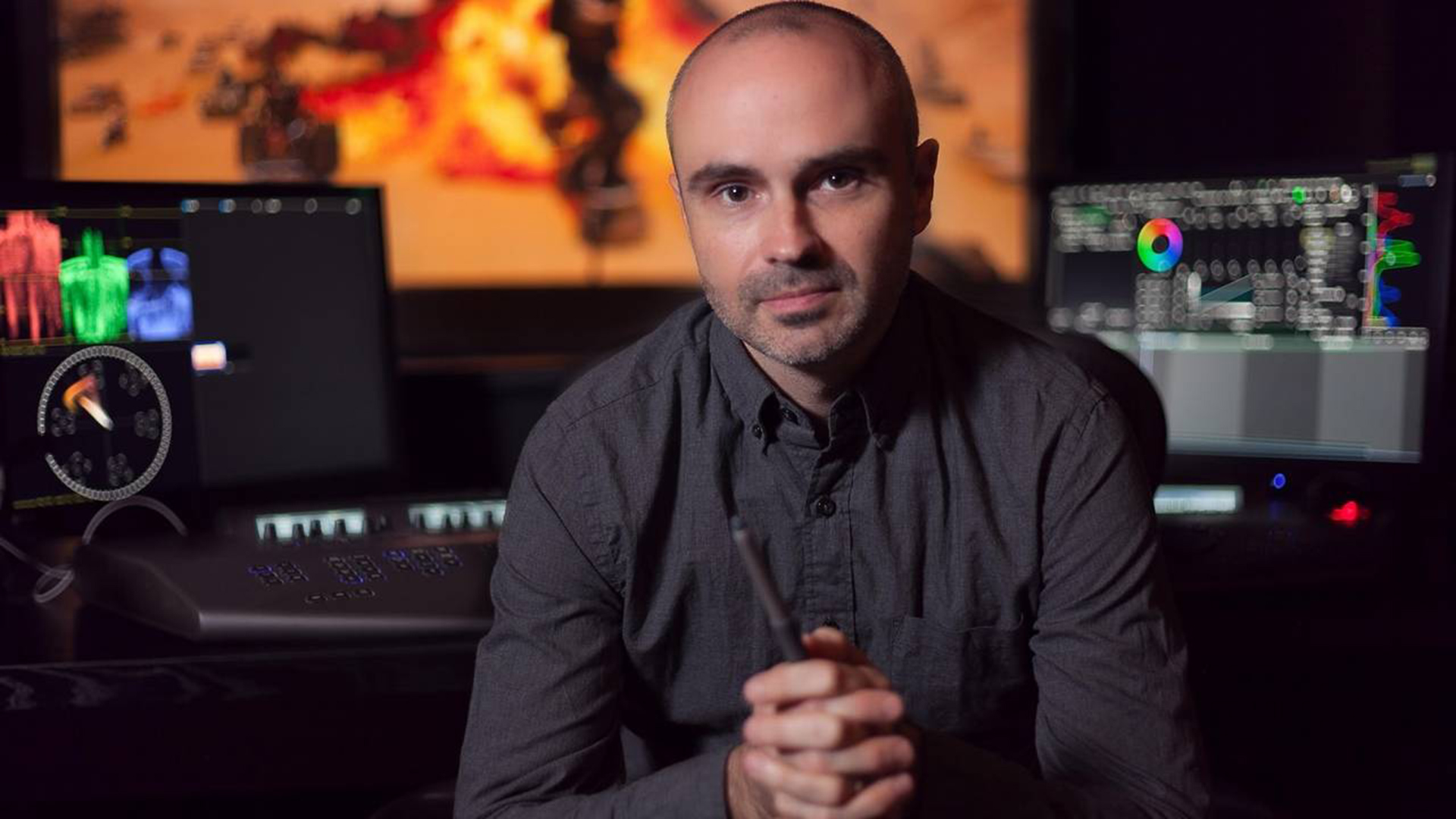 Replay Review: We all like to think we know what the work of a colourist entails, and with the affordability of gear now, 'everybody is a colourist'. But there's far more to grading than tweaking the image or adding on a LUT, and this tutorial series from Mad Max: Fury Road colourist Eric Whipp promises to be a masterclass on the subject.

Go on, how many of you have been tempted to slap on a LUT to your log footage and call it a day? Judging from a fair few YouTube videos, quite a lot of people fall into that trap. Grading your footage, truly grading it, is an involved and very creative process requiring both thought and technical ability. There's a lot to learn, which is why I jumped at the chance to take a look at a new online course, 'Color Correction Secrets from Eric Whipp' hosted by Filmmaker U.

Filmmaker U is a collaboration between Josh Apter and Jason Banke from Manhattan Edit Workshop, and Gorden Burkell from Aotg.com, so it has incredibly good pedigree behind it. The online course is, as its name suggests, taught by colourist Eric Whipp, who along with numerous commercial credits is best known for his work on Happy Feet and Mad Max: Fury Road.

The course takes the format of an informal interview type setting, with Eric tackling different subjects he has been asked about by the interviewers. Set in his colour correction suite, Eric not only discusses the various topics at hand, but demonstrates using untouched shots, mostly from Mad Max, how he approaches the job of grading each shot.

The course is very well organised. What stands out about it is that it doesn't jump in to long technical detail or software specific methods. In fact we don't even know which software Eric is using. Instead it tackles the methods of a colourist right from the beginning, discussing matters such as how to communicate with directors, how to deal with disagreements, and when is it better to fix something in post vs getting it right on set.

Notably the course also has a section on Imposter Syndrome, something that many in the creative industries will be familiar with. It is somehow reassuring that even the top guys in the business deal with such anxieties. However Eric discusses how this can be channeled positively into making sure that every job you do is done to the absolute best of your abilities. 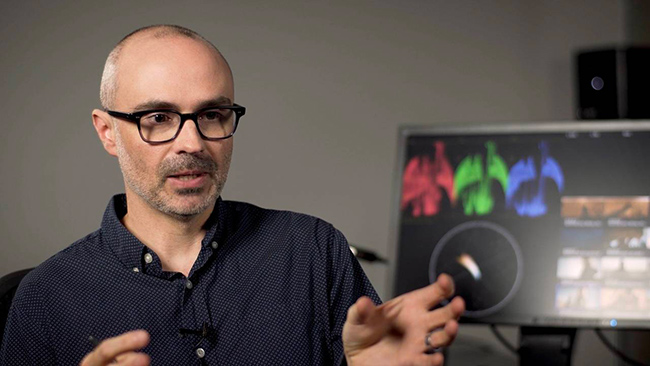 There are six chapters in all plus additional material, each broken up into a number of individual video segments, mostly around 3-6 minutes long. The chapters are as follows;

There are then some appendices, which add in material that didn't make the main cut, but that still offers valuable advice, as well as some downloadable PDF's and information videos further examining subjects such as colour theory.

The information Eric imparts is incredibly valuable. He is very clear and concise in the subjects he talks about, and he demonstrates his approach to each shot in a way that is both easy to understand from a technical perspective, but while also telling us his thoughts and full reasoning why he is making the adjustments he is. 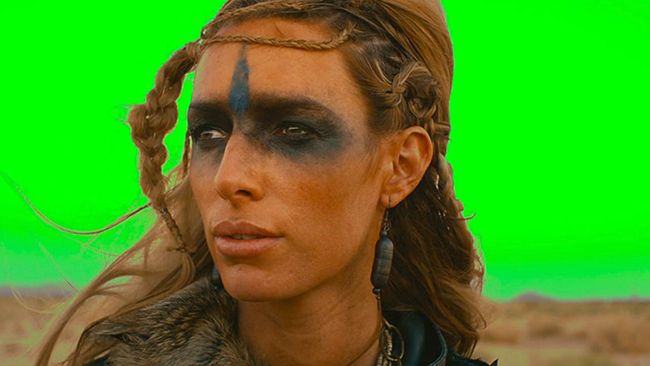 Techniques such as sky replacement are tackled extensively

Along the way Eric covers topics such as matching cameras and matching shots (two different things), day for night, sky replacement, and a lot more. But what stands out about all of this is that Eric makes sure we know why he is doing what he is with each shot. A prominent example for instance, and a theme that recurs throughout is making sure you understand light and lighting direction, and how it relates to the adjustments you might make. Everything has to work within the context of the shot. For example there is no point adding in a vignette that overlays a visible light source in a scene because you are darkening the practical light source. The adjustments we make need to have a natural context in what we are seeing.

Another common theme that informs a lot of the adjustments that Eric makes is the idea that you need to be looking to see where you want the viewers eyes to go. Whilst this is mainly the job of the DOP, it is clear from Eric's teaching just how much the grade can compliment and add to this. Eric subtly lightens and darkens areas of the image, brings out actors eyes, and even shows how subtle masks can enhance the lighting and shape, all in the name of drawing in and engaging the viewer.

Sometimes while Eric is making the adjustments they can seem very subtle at the time. But when he flicks between the before and after image is is clear how big a difference has been made. 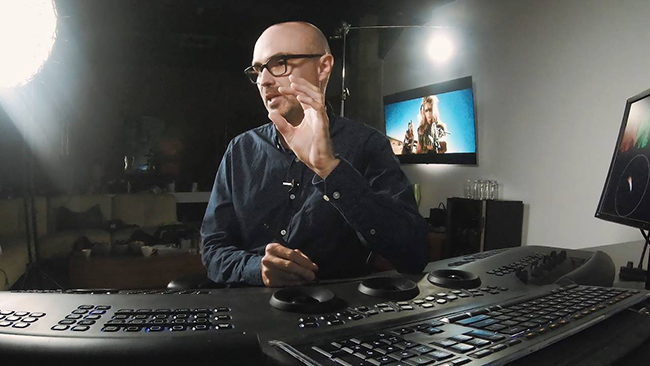 At each point Eric takes us through his full decision making process on a shot in realtime.

While his attention to detail is exemplary, he is keen to point out how we shouldn't get fixated on the small details of continuity we can't fix. A case in point was during a section in which he is matching two shots. There is a fairly sizeable lighting difference on a weapon that the character is holding. But Eric points out that the audience is forgiving of that sort of thing, because as humans we are focussed elsewhere, namely the subject's eyes. If we can get the audience focussed on the area of the image we want, they will forgive a surprising number of shot continuity issues, even if as production people they might drive us nuts!

In all of the knowledge he imparts, at no point is the idea of adding on a LUT ever discussed. This is because, generally, serious colourists will not generally use them. Everything Eric discusses or shows runs from the base point idea that you should be asking yourself some basic questions, amongst others, before you even begin. What look do I want? Why do I want that look? How can my grade help tell the story?

From a technical perspective, too, there is also a treasure trove of knowledge. We might all know about complimentary colours, or how orange and teal go together nicely, but Eric also looks at how we need to be aware of precisely how we see and respond to colour. For example when the subject of saturation comes up, Eric makes the point that it often isn't more saturation that is needed, but maybe more contrast, or an opposing colour. For example cooling down one colour can make the adjacent colour look more red or warmer. In other words we need to be looking at how the colours in the scene can work with one another to help create the look we are after.

An example of this is when Eric is working with a close up from Mad Max and he cools down the tone of the black eye makeup the character is wearing to help bring out the warmer tones of the skin.

The course covers far more than I can ever describe in a short review such as this, and the nuances and thought processes contained within it will most certainly warrant going back to rewatch it, perhaps numerous times in order to truly pick up on everything. Luckily each chapter and video is broken up very clearly, and you can easily find the one you are interested in to watch again.

Colour Grading Secrets From Eric Whipp costs $99 from the Filmmaker U website and I have no hesitation in thoroughly recommending it. At this sort of price the advice and knowledge on offer is a veritable bargain!