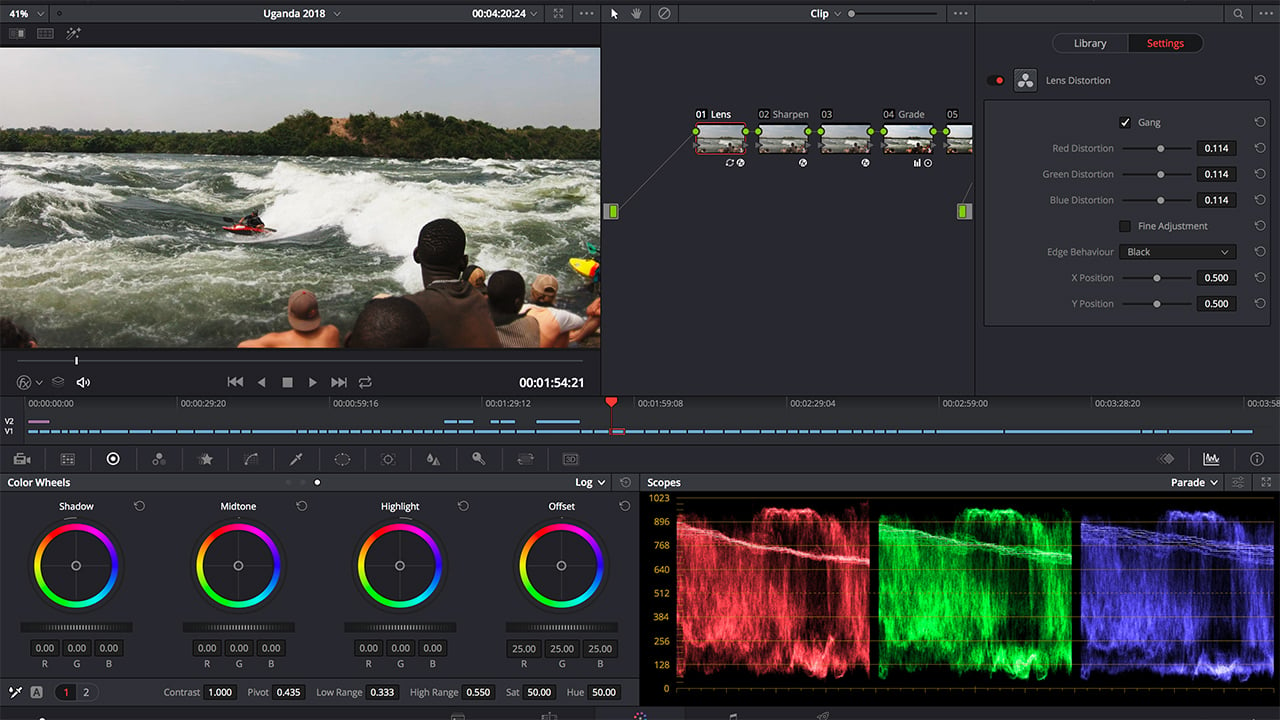 If you are using the free version of DaVinci Resolve, or still don't realise that it is now a fully fledged NLE, here's a few reasons why you should consider moving to the full Studio version of the software.

Readers of RedShark may be acutely aware that I very much like using FCP X. It’s a great piece of software, recently made greater by some nifty additions and changes, although it does tend to split opinion. However after having used DaVinci Resolve 14 Free on and off for a good while (and indeed previous versions of the software), I decided to make a leap and get myself the full Studio version of the software.

Resolve already has a pretty hard core user base. And for very good reason. It is simply one of the best value, yet most powerful pieces of software out there. It is mostly widely known as colour correction, or grading software, and to many people who have never tried it or kept abreast of the many changes, this is still what comes to mind when Resolve is mentioned to them.

Granted, I am not likely to be editing the new television advertisement for BMW any time soon, but as a one man set-up I thought I’d offer out some reasons as to why Resolve would be a great choice of software no matter which of the current popular alternatives you currently use.

Resolve 14 is fast. Even on a laptop. Although I have to reduce the playback resolution - which doesn't affect the project or output resolution - I can still play back at realtime, or a frame rate useful enough to let me see what a grade is like in action. Obviously you wouldn’t do top end grading work on a laptop, and the performance will depend on the extent of what you do in each node, but this just shows how well optimised the software is now. 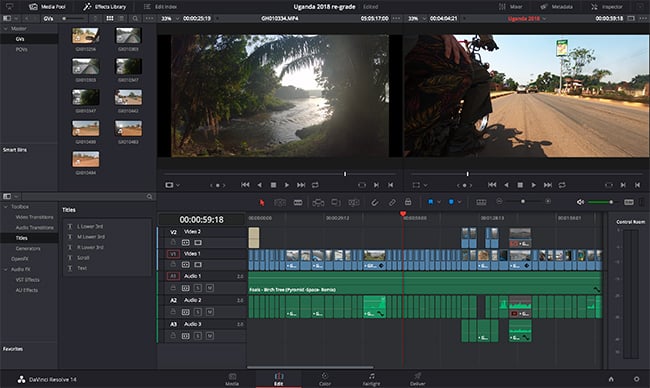 Built in effects that you actually want to use

Resolve 14 contains a lot of different effects and filters that in other software you would usually have to buy third party plugins for. Often at the same price as the software itself! Not only that, but these built in functions are every bit as good as, and sometimes better than some of those third party alternatives. For Instance, the noise reduction is sublime in its ability to not only drastically reduce the problem, but does so in a way that looks natural and keeps detail. Plus it takes care of spatial noise as well as temporal. It does this without making you wait an age for it to render in comparison to some third party plugins, so you don’t dread the point at which you need to start using it.

Other features include true motion blur. This calculates motion blur based upon movement. For example if you wanted to add in realistic motion to a 3D animation. Or if you used high shutter speed for slow motion, but wanted some footage at normal speed, you can dial in just the right amount to compensate for the shutter setting.

Lighting effects, too, are incredibly effective. Resolve will look at your footage and matte out objects. For example you could place a light flare ‘behind’ a tree. Resolve will nicely account for the tree automatically so that your flare only appears glinting through the gaps in the leaves/branches as the camera moves. Something that ordinarily you would need to round trip out to a package such as After Effects for. 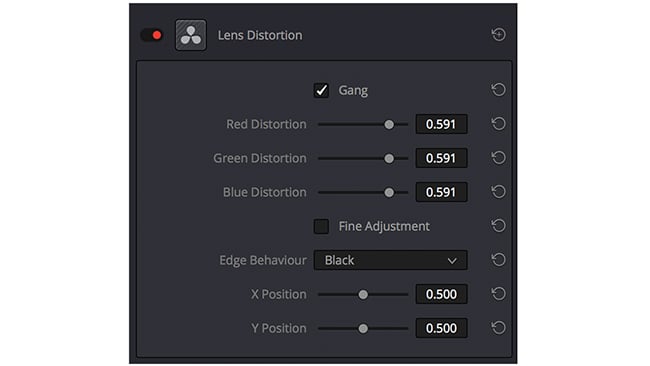 Optical correction is another convenient function. You can do an automatic optical correction, and Resolve will examine your footage and apply the right amount in one click. However, in the colour grading section there is an alternative more featured OpenFX version of this. This allows you to fine tune the crop after the correction has been applied so as to retain as much resolution as possible, rather than just letting the software decide for you.

It goes further by offering vertical and horizontal perspective adjustment, which allows you to line up straight edges. So it isn’t only useful for correcting fisheye distortion. Something that could come in particularly useful for architectural shots.

In fact one of the things I have found myself really liking about Resolve 14 is that the included OpenFX filters are actually truly useful. The Face Refinement filter for example does everything from automatic facial tracking, and the ability thereafter to quickly and easily use different sliders to tweak the sharpness and brightness of the eyes, smooth the skin, lighten the shadows, tweak lip and skin tone, and even add an eye light without the need for any manual masking or tracking at all. And it is available right out of the box. This filter in itself is incredibly useful for interview or talking head style shots, and it works brilliantly. 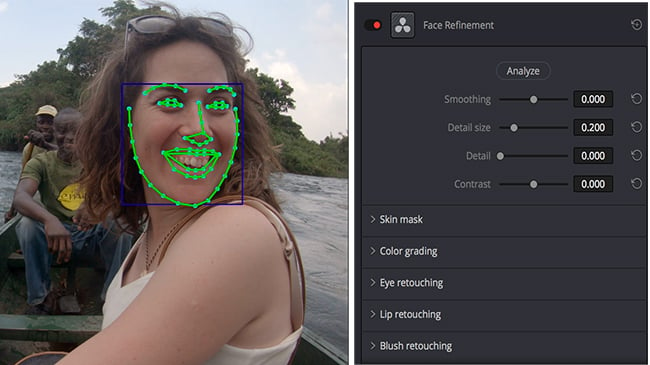 This isn’t to say that you can’t add in third party plugins. You can do this every bit as easily as other software, with plugins such as RedGiant’s Universe for example being fully compatible, along with many others. So you wouldn’t find yourself sacrificing such things if you made the shift to Resolve.

Resolve promotes a workflow in that you have several distinct workspace tabs for importing footage, editing, grading, sound mixing, and final output. It’s all very neat and tidy, but unlike some alternative software it doesn’t lock you down to it. You can easily and swiftly move between them. If you need to make a change to editing after sound mixing or grading, no problem. And there’s no need for round tripping out to a separate piece of software.

Other NLEs often have workspaces that are either pre-set to do certain tasks, or can be customised. But they are still only variations on the same windows. Resolve's workspaces are truly designed for the purpose they are intended, and not simply a re-arrangement of existing windows.

If you ever have to deal with raw footage, Resolve handles it like any other clip with absolutely no faff at all. You can easily create proxies or other optimised media if you like during editing, safe in the knowledge it can all be rendered out from the original files at the end, without having to touch any other software. 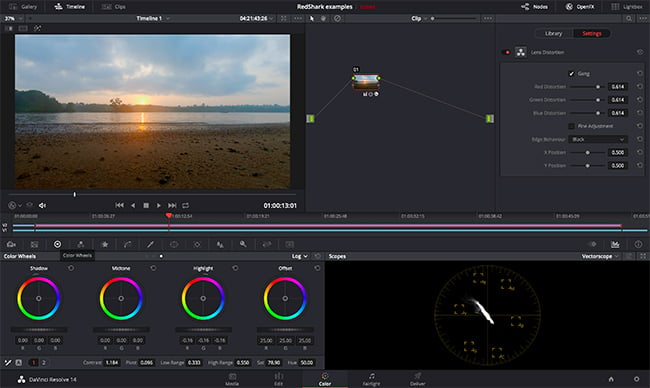 It is one of the best colour grading apps out there

Resolve is up there with the best as a grading system that can be used on very high spec projects. It would be an absolute bargain at it’s price of $299 just for the grading suite alone, let alone with an advanced NLE and sound mixing studio built into it.

The colour grading section of Resolve is easy to learn (and obviously hard to master, but that’s down to experience, skill, and knowledge). But even a grading newbie can learn to make some solid and useful corrections from day one. Plus it is a breeze to create multiple versions of a grade and cycle between them. This function alone is almost impossible to replicate in any of the mainstream NLEs out there.

Audio mixing and sweetening functionality is usually so lacking in most dedicated NLEs that it is often farmed out to third party software for the really detailed stuff. But with Resolve 14 you have Fairlight, which even in software form is one of the best sound mixing facilities in any NLE. But the beauty is that it can be used with dedicated hardware in the form of the Fairlight Audio Accelerator to give up to 1000 tracks of audio playback with effects and almost zero latency. There are even dedicated modular consoles that work with it too, for the ultimate in control. 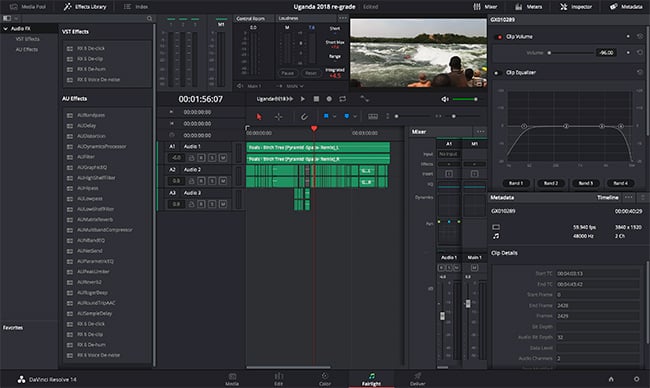 One of the really nice aspects of Resolve is it’s ability to allow multiple users to collaborate on an edit with lots of fluidity. If you are using dedicated colourists, sound mixers, and editors, they can all handle their section of a project without any need to deal with round tripping issues or finnicky EDLs and XMLs. Everything is made less of a headache because it can all stay within a single piece of software.

There are far more useful features to DaVinci Resolve than I could even begin to cover here. I know that I sound like an advertisement for Blackmagic Design, and there will be people out there who may take exception to my waxing lyrical. But the truth is that I am loving using the software in its full Studio form. Is it perfect? Of course not. Like any software there is the occasional bug, or annoyance, such as not being able to change a project’s frame rate after you have started editing, something I have learnt to be very careful about. But no software will ever be 100% perfect. What you have to do is look at the overall picture of what you are getting.

Even for a one man operation such as myself it is a truly useful tool. And when you look at what you get for your $299, it is absolutely astounding. If you are sitting on the fence as to what NLE you should try as an alternative, and haven’t considered Resolve to be an end-to-end editing system, it is perhaps about time that you did. If you are using the free version and are wondering whether it is worth paying for the Studio variation, after having done this myself, I can confirm that the additional capabilities of the full version are very much worth the outlay.