The earliest colour films weren't very good, but they're still amazing to see 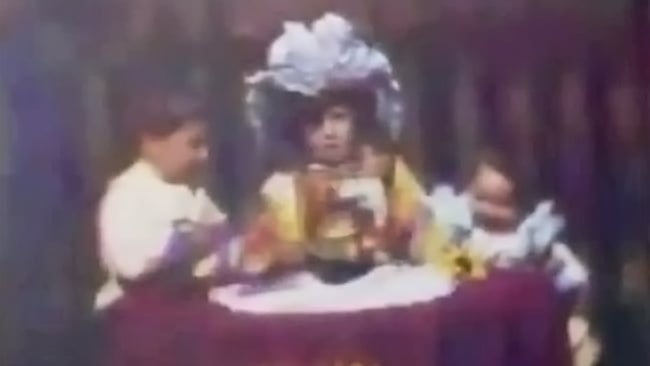 Every so often, someone will dig through a box full of old junk and turn up a bit of ancient film which turns out to be the new, earliest example of some particular technique. Such is the case with a bit of colour footage, discovered in 2012, of, er, some children hitting an aquarium with some flowers - in summer 1902, and shot by filmmaker, Edward Turner.

It's very interesting material because of its vintage and because it highlights one of the problems of sequential-colour cinematography. Before the introduction of film capable of recording a full-colour image in a single frame, one of the earliest approaches to colour (or sort of colour) photography was to expose successive frames through coloured filters. This had the advantage of requiring very little modification to either camera or projection equipment. The mechanical synchronisation of the rotating filter wheel involved more or less the same sort of engineering as the conventional rotating shutter, with the only extra requirement being that the right frame was at the gate for each section of the filter.

Most people are familiar with the idea that the earliest colour systems used red and green only. The reason for this choice is that it could reproduce colours in the pink, orange and brown areas that comprise human skin tones. Though it couldn't reproduce blue, this actually looks surprisingly good, although it does raise one alarmingly familiar issue. Early 3-strip Technicolor productions are often heavy on blue in their production design, which we might suspect of being motivated by the same sort of thinking that causes people to thrust pointy objects toward the lens in more recent stereo 3D movies. Producers have always wanted to see the results of their investment boldly emblazoned on the screen.

The system used to shoot the 1902 footage is more or less the earliest full-colour system known. The Lee-Turner colour process used a filter wheel to expose the red, green and blue records on successive frames. It actually predates the 20th century and the new material is very possibly the earliest surviving full-colour footage known. As with all sequential-colour systems, it worked nicely on static subjects but naturally suffered false-colour artefacts with moving objects. Two-colour systems reduced the problem somewhat, although as early as 1906 there were alternatives which used various ingenious approaches to placing tinted mosaics of coloured inks onto film.

Naturally, interest in solving the rainbow artefacts was keen. The earliest non-sequential colour cinematography technique was the Warner-Powrie process, which worked somewhat like the Dufay technology that we discussed back in 2014. If anyone knows of a surviving example of Warner-Powrie footage, let us know (but not before you've let a major museum know.) Dufay stills could reproduce perfectly reasonable colour, although the enormous magnification inherent to the theatrical projection of movies made the matrix of coloured — er — “pixels” too obvious for the technique to beat Technicolor.

By the end of the 40s, Technicolor had made full-colour movies an everyday occurrence and had even begun to move away from their famous 3-strip process, although the now-obscure Alpha Photographic Laboratories were still willing to try their subtractive 2-colour process, Alfacolour, as late as 1950. It didn't last, probably because people like blue, which brings us back to the kids clobbering the fish tank and their noticeably blue-feathered parrot. Even if the technology hasn't progressed in the last 115 years, we can probably be reasonably confident that the content has.

A modern computer reconstruction of Turner's footage is on display at the National Science and Media Museum in Bradford.