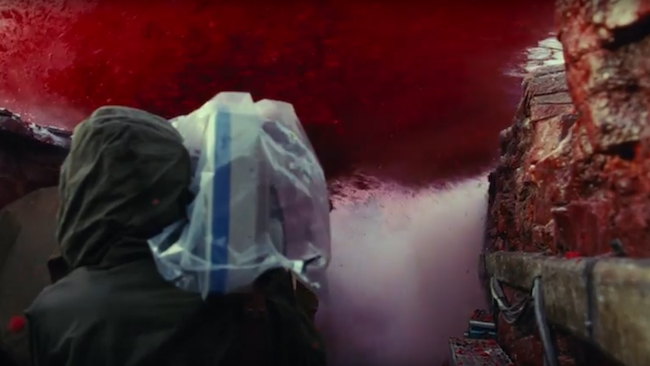 Now that has got to be over and above day rate...

Watching this well-wrapped camera operator and their equally well-wrapped camera get doused in a torrent of red liquid, you realise that the latest behind the scenes video for Star Wars Episode 8 shows that it's going to be all about the large scale practical effects.

The footage debuted at Disney's D23 Expo at the weekend and was full of large sets, large models, large animatronics, large explosions and more. Yes, there was some green screen work and yes there were lots of scale models from the small to the fairly massive, but the whole vibe is of a return to old-fashioned film making. This, of course, dovetails with the whole ethos of shooting Episode 8 on 35mm: you can bet there's going to be a whole mess of digital manipulation going on in post but the starting point is as in-camera as possible.

According to Vanity Fair, director Rian Johnson has insisted that more sets be built for this film than any other Star Wars movie since Kathleen Kennedy took the helm of Lucasfilm in 2012— and that means more than for The Force Awakens, Rogue One, or for the still as yet untitled young Han Solo movie that will come out next year. The Episode 8 crew even faithfully recreated the Jedi village of Ahch-To, which is based on the beehive-shaped monk's huts on Skellig Michael on a cliff outside Dingle to ensure they got the same lighting as the original (but protected) location used in The Force Awakens.

Whether this is going to herald the return to heroically large-scale film making is open to question. But we'll all be able to see the results of the team's practical labours and whether all that real life effort translates into a better film when The Last Jedi opens on December 15.