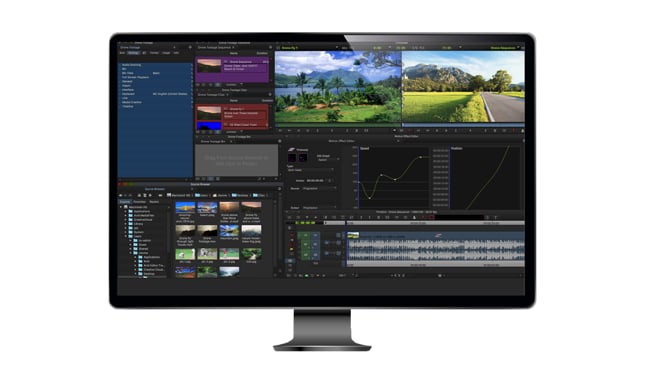 The Media Composer | first interface: the same but different. And free.

If you want a dramatic illustration of how much the industry has changed over the past few years, the free version of Avid Media Composer is as good a starting point as any.

Avid Media Composer | First is not the first high-profile non-linear editor to be reincarnated into a free version. Lightworks has had a free version for years, Media 100 (remember that?) can be had for free, and there are any number of freemium editing tools now hitting the marketplace. But it is possibly the most important, with Avid’s own figures suggesting that 95% of mainstream movies released in 2016 were edited on the software.

It might not be the totally dominant force it once was, but it is still considered industry-leading by many and is probably the most important free version of a post tool since Blackmagic bought daVinci and set Resolve off down the same path,

Avid’s been down this path before too, releasing a free version of its ProTools audio software last year. And obviously that all went well enough for it to consider doing it all over again.

So what do you get? Well, for anyone who cut their teeth on the bad old days of free software, a surprisingly large amount. Avid itself likes to say that First goes where other free editing applications leave off. Certainly there’s a lot of high level stuff in there, including multicam editing, audio ducking, and the ability to reframe high res sources. It is essentially the same as the paid version, only with a set of limitations that will either bother you hugely or not matter at all depending on where you're coming from.

The main limitation is the number of tracks. MC First is limited to four video, and eight audio tracks as opposed to the full version’s 24 and 64 respectively. Data tracks are not supported in First and fully supported in MC. File, value and third-party export is not supported, output tops out at 1080p, colour space is limited to 601/709, and there are a whole bunch of other things in there from the number of bins (5 versus unlimited) to a limited core set of video effects, all of which is designed to funnel users to the paid version.

Even that though is not what it was, with subscription-based pricing starting at $49 a month. Elsewhere in the industry Adobe just posted record figures, its creative division revenue exceeding $1 billion in Q2 of this year, with much of that being driven in turn by its move to a subscription model. In other words: pitch it right and these things work incredibly well.

Media Composer | First is available as a free download now and Avid will be hoping that it has the right mix of free features and nagging limitations to grow the user base while simultaneously enticing increasing numbers into the paid version. It will be interesting to see if it succeeds.