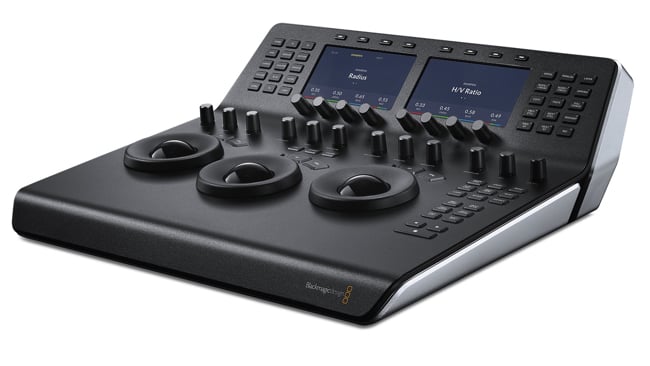 RedShark Review: Brett Danton tried out the new Blackmagic Davinci Resolve grading panels and, within five minutes, was wondering how he had ever lived without them. This does for Resolve what the Wacom tablet did for Photoshop.

First of all, it's important to say that I'm not a colour grader by profession. I'm a professional cinematographer and director. I work closely with professional colour graders and take part in grading sessions but I am not a guy that normally takes on grading projects for clients.

I also want to say that a good colour grader can make or break the look of a production: they sway and manipulate with colour and they strongly influence whether the viewers believe in what they see — and of course what the director are trying to portray.

But because of my professional background and relentless push for imagery excellence I do grade my own smaller budget work and personal projects, and while I understand the use of colour, looks and LUTS, the ultimate subtlety in grading control has always been missing for me via a computer interface. I have tried other control panels with Resolve over the last four years but never quite understood the key mapping provided, or found them clumsy in set up, work flow or not dedicated to the software.

Because of this I was very keen to try the new Resolve panels from Blackmagic and this week I got to play with the $2995 Mini. 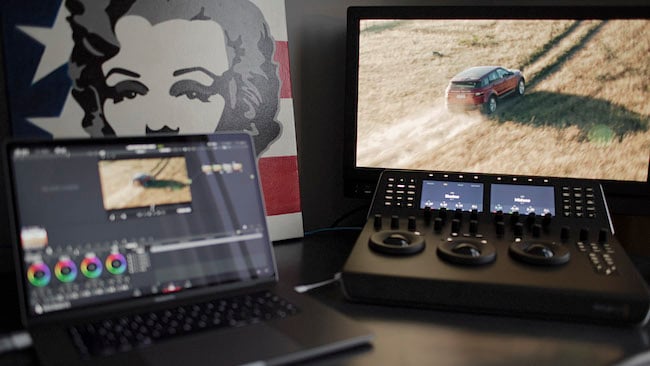 The first thing that struck me was the construction, it’s a beautiful piece of design made with quality components. The setup configured into my system without any issues, I was lucky enough to also have a 4K Canon HDR monitor (on loan from Proactive AV) and a full Blackmagic Ultrastudio 4k playback set up, which was the same as I use on set along with the latest Macbook Pro (that came configured from Jigsaw24).

If I think of the changes over the last few years I am still amazed that now, at home I have a real-time RAW 4K grading suite, that not long ago would have had a six-digit price tag.

Within five minutes of using the panel I knew I won’t be able to go back. It put all the imagery controls in a logical layout right in front of me, including things that I had never used before or even knew existed. Granted, to master it will take time, but I don’t think that much time because of the way it’s designed.

I tested some Log footage that was shot some months ago and on my first attempt using the panel got a superior grade in half the time to what I would have ever achieved via the mouse and keyboard input. I felt in control of the look rather than searching through palettes looking for what I wanted and often didn’t find.

Over the last few days I have also tried the panel on a BTS grade for a client and found the grading process far more rewarding with the final product produced in less time and what I believe is a superior look. Because of the panel's layout you can work through image control in a logical approach, and, by the end of the second day, I only ever touched the computer to get a qualifier colour.

With the panel placed in front of the monitor, I found far more absorbed into the grade creating a much better creative environment.

The colour controls all make sense and the balls and wheels have a professional feel. Mask input surprisingly is much better than the mouse and once you master the layout you can zip around and look like a pro twiddler.

Qualifier input was the thing for me that would take time to learn, but have started to get it. Because of the design, I see little reason to touch your computer controls once mastered, from new node all the way through to tracking can all be done in a logical workflow via the panel with vastly superior control. I particularly like the speed you can grab a still and use as a reference on a new shot.

The Mini is a reasonable size piece of kit, but for me that helped for the overall feel. It's stable on the desk and helps to minimise button overload by placing in groups. I would take this on location and would imagine the Micro surface perfect for the travelling grader.

If you get the chance try a 4K grading monitor when using 4K and above files, the colours and clarity from the Canon took everything to the next level, every bit of detail and colour that was available in the file could be seen on the screen. (I use a non-HDR Canon monitor on set at the moment.)

The panel turns using Resolve into a very professional and pleasant experience and I would say a must for any budding grader or professional; the ability to flip around, try, and experiment on looks at a speed you could never achieve via a keyboard, is remarkable. And it's greater still thanks to the reset and undo tools where you can get back to where you were in a blink of an eye.

It brings a new level of look and control that I had only ever seen in a professional suite.

I am looking forward to is trying this on set in a production set up, checking footage and creating on-set LUTS. For me, this has changed using Resolve and colour grading as much as the Wacom did for Photoshop. I don’t often get overly excited about new gear as it's normally an incremental change, but this is a leap.

Having zipped around the forums and looked at the feedback there are a few things I agree with that should be implemented in future firmware. One is a sleep mode. Having this at home it would be nice for it not to glow when not being used without unplugging. Another suggestion on the forums is the ability to have waveforms and scopes on the panel screens, this I think would be great on set and for the smaller set up. Also for newcomers to track balls maybe the option of speed control like a mouse.

My own list is headed by double tap for fast playback and maybe the intro of scroll control playback via the right wheel under some situations: often I want to find the perfect frame to start grading from.

But if you grade regularly in Resolve I would not hesitate to get either version of these panels depending on your needs. For me it would be the Mini. Being able to avoid keyboard and page scrolls menus on the computer is fantastic.