Watch out for an FCP X Render Bug 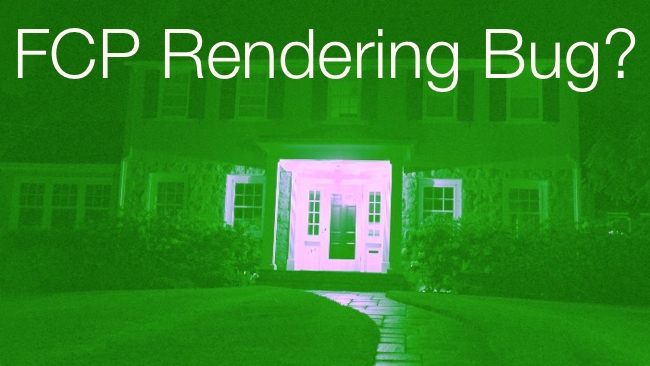 Since the release of FCP X 10.0.6, many of us have been experiencing occasional “frame glitches” in footage rendered directly from FCP X where certain plug-ins have been applied. Ned Soltz, our New York Correspondent, reports

I have experienced these glitches from Pomfort’s Slog plug in as well as from Magic Bullet Looks and Magic Bullet Mojo.  This has been reported as well on Redgiant Software’s discussion board as well as other sites.

Apple aware of the issue

Aharon Rabinowitz on behalf of Redgiant posted that there is a bug affecting FCP X which causes these corrupt renders when using both Redgiant and other plug-ins. Apple is aware of the issue but so far there has been no fix forthcoming.

The full text of his post may be found here.

The workaround is to export a Project directly to Compressor rather than rendering out directly from FCP X using the Share menu. Redgiant has been unable to reproduce the glitch when utilizing Compressor.

In the meanwhile, FCP X 10.0.6 and 10.0.7 users who apply plug-ins from any vendor should inspect their footage carefully to ensure there are no random corrupt frame renders. Back in December 2012, another post on the Redgiant forum suggested a workaround consisting of finding the corrupt frame, changing a filter parameter, resetting that parameter, rendering and then repeating the process several times if necessary. That, however, could be very time consuming and still imprecise.

If your rendered footage has such corruption, re-render your Project through Compressor. If you have not yet purchased Compressor 4, now might be a good time to do so.

Stay tuned for a fix.