Looking at Adobe’s announcements between the lines 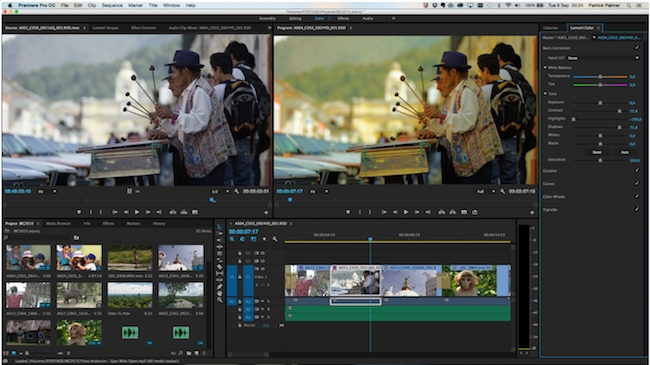 Opinion: Ned Soltz on the significance of Adobe’s IBC news and how it’s both leading in some areas and knows it has to play catch-up in others.

I am an unrepentant fan of the subscription model for software. It allows for a balanced and predictable budget item. And more important it complies with at least US regulations that require major software updates to be paid rather than free. Adobe continues to deliver often several major enhancements per year with at least two of those announcements timed around NAB and IBC.

But we industry analysts love to parse product announcements and Adobe always gives us an opportunity to read between the lines.

Enhancements to one product are often catch-up with another. PremierePro CC will now be able to publish (“share”) to Behance, Facebook and YouTube. Final Cut Pro X always had share functions to a wider range of destinations. But not of course Behance since that is an Adobe property. Of course, a developer is certainly entitled to promote its own products but reading between the lines here suggests that Adobe needs to augment Behance’s user base. But again, FCP X users will say “we already could share.”

Then we have HDR enhancements to the Lumetri Color Panel. Adobe, like all developers, recognizes that content creation for HDR delivery is the next new opportunity. But the fact that once again this capability is rolled out for PremierePro gives yet another hint that development of SpeedGrade is at the very least on the back burner. Or I see possibilities that Adobe might completely bundle SpeedGrade functions into PremierePro. In a world of free DaVinci Resolve (or even the $1000 Resolve Studio version), SpeedGrade is a hard sell despite being part of the CC Suite. Adobe no doubt recognizes that its development resources are best utilized in SG’s under the hood technology and bringing that into its mainline NLE. The urgency is increased as Resolve marches toward becoming a complete edit-color-finishing application.

Instructional tips integrated into Adobe Audition are welcomed by audio-challenged editors such as myself. While Audition will never dislodge ProTools as the audio pro’s DAW of choice, more and more general video editors are called upon by budget-conscious (read “stingy”) producers to enhance audio. This is a new area for many of us and having such tips and tutorials available within the application can definitely drive business toward the Adobe CC app family.

Adobe admits that rendering and preview speed was a perennial issue with After Effects and has been working in that area for the past few update cycles. This is a welcomed enhancement and in fact is facilitated by the subscription model which allows Adobe as well the ability to plan its resource deployment.

Now, let’s get down to Primetime.

The civil libertarian within me raises the barricades as it becomes clear how much information analytic and metric services collect about users. It might be of less concern to our kids who have no problem exposing every moment of their lives on social media but the realities of 21st century Earth are just dawning on many of us.

Yet we all want to get our share of the kitty. This is our business, after all, and content needs to be sold and advertising needs to support those who would buy our content. I feel better now and the barricades have come down. And creative little ad pieces with talking reptiles, cartoon characters and, of course, cats can in themselves be amusing. They even might drive me to consider buying a product or service.

As a result, the ability to target users according to demographics and interests can provide a far more enjoyable viewing experience than being forced into a mass-broadcast ad for something that doesn’t in the least appeal to me. If thought of in that manner, global conspiracy theories evaporate. And Adobe in fact does a service to content creators, content providers and advertisers.

Bottom line—Adobe over the past few years shows it means business. It has led in areas and knows where it needs to catch up. And the ‘idea to delivery’ range of product offerings leaves no doubt of Adobe’s long-term commitment to the industry.