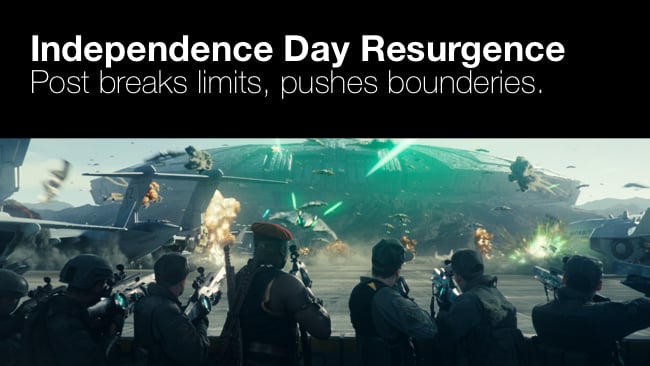 There’s no better place to see and feel the exponential rate of progress in technology than a modern, state of the art VFX/CGI facility. London’s Soho is packed with them but only a select few can claim such prestigious and mind-bendingly complex projects as Cinesite.

Formerly owned by Kodak (and clearly a problem for them given Kodak’s journey through the last decade), a management buyout in 2012 gave the company the freedom to re-invest in technology and to move very seriously into animation. Since then, they’ve blossomed, and so has the sophistication of the projects they’ve managed and completed.

Perhaps the most topical of which is Independence Day: Resurgence. This was always going to be a CGI-laden film, given the visual complexity of its predecessor from twenty years ago. But this year’s version has a breathtaking scope, with more moving CGI elements, probably, than ever before, and hence unbelievably complicated sequences to create and to composite.

Just to give you a feel for how big this project was - just for Cinesite (and there were obviously several other partners working on different aspects of the film): storage alone topped out at more than a Petabyte, for all the versions, effects, assets and rendered final footage.

And to achieve all of this, rather surprisingly, Cinesite actually has fewer computers in the building than it used to. There’s a very good and rational reason for this.

Space in Soho is very limited, because everyone wants to be there. It’s not like it used to be when every third person you saw would be carrying a reel of film, but you do still suspect that a similar proportion of the locals have a disk drive in their bag, or have just sent some files across a very fast network. The fact is that it’s incredibly useful having everyone together, but it’s expensive.

Cinesite’s own computers used to take up a lot of room, but now, with very close involvement from Dell, all of them, with the exception of the CG and VFX artists’ workstations, are offsite in a data centre. What this means is that this valuable, newly liberated space is now available to be packed with artists and all the rest of the production team. "We’re now much smarter with our use of space which has had a positive impact on both cost and production,” is how the Cinesite management team sums it all up.

The new set up is now well-tested, with serious involvement in productions including The Man From Uncle, Spectre, Skyfall, San Andreas, and now Independence Day: Resurgence in the bag.

Of course, in today’s filmmaking environment, it’s rare for a single facility to be responsible for all VFX and CGI. Being able to share efficiently is as important as doing the work itself, and this is still a challenge. The problem is that every production brings with it its own workflow and methodology. Cinesite deals with this by being agile on their feet and through their sheer depth of technical knowledge and experience. Michele Sciolette, Global Head of VFX Technology, together with his colleagues, exudes calmness and enthusiasm, but you can only guess at the staggering complexity around transferring so many assets - models, textures and effects - from one facility to another. Even the way the assets are organised can have huge implications for the complexity of the job.

We saw footage from Ant-Man and Independence Day: Resurgence, and - alongside the finished footage - saw breakdowns of the VFX work. Even if we’d been shown these at a tenth of the speed, it would have been hard to take in, such is the complexity and the intricacy of the projects. It’s easy to forget that you intentionally don’t see a lot of the VFX work, nor can you guess at the depth of it. It’s so good that it just blends in, and it’s only when you’re seeing something that’s clearly impossible that you have to conclude it’s CGI as opposed to reality.

We were at Cinesite courtesy of Dell, who were promoting their ability to work with customers and design effective ways to improve workflows and business efficiency. Don’t confuse this part of Dell, the Enterprise Division, with the Dell that makes laptops and much, much cheaper desktop systems. From what I’ve seen, Dell completely “gets” the specific needs of the post production industry. It’s an impressive performance from a computer company that comes from what seems a very grey and generic seeming IT industry, and it’s an important kind of relationship now that the world of high-end production and post production depends almost entirely on very high performance IT equipment and networks.