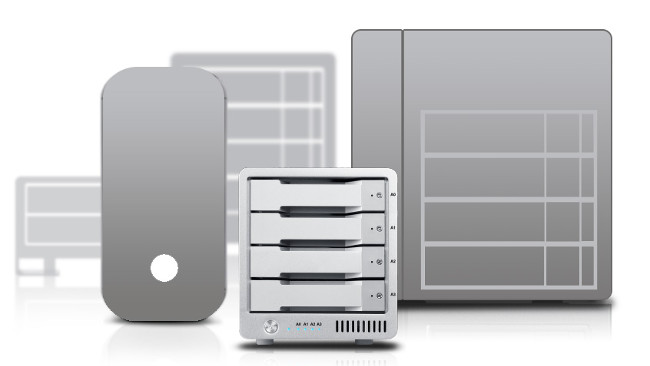 RedShark review: Is the CalDigit T4 an appropriate fit for editors and video professionals?

CalDigit is a supplier of storage solutions for creative professionals, including photographers and video producers. The T4 is the company's hybrid Thunderbolt 2 RAID-capable storage solution. T4's have a tightly fitting aluminium die-cast enclosure. They come with four lockable and removable drives that carry a three-year warranty. The unit itself carries a five-year warranty.

The T4 is an SSD or HDD-based hybrid RAID solution, factory configured for macOS. Support for SSDs isn't all that common with RAID systems, nor is the programmable chip that you configure with a menu applet onyour Mac. The T4 with SSDs comes as a 4TB system with throughput speeds of up to 1370MB/sec in RAID 0. The T4 with HDDs can be configured with up to 20TB of storage.

The configuration applet shows information including per-disk operating temperature, serial number, SMART status, etc. Another tab lets you set the unit to RAID 0, 1, 5 or JBOD. Unique about the T4 is that you can set up two different RAID 0 or RAID 1 configurations — each using two drives. RAID 5 uses all four. Finally, you can set up one RAID 0 or 1 configuration and have the two other disks function as independent drives.

The die-cast aluminium enclosure of the T4 dissipates heat efficiently. The drives in my unit never ran warmer than 37°C with an ambient room temperature of 25°C. That's in stark contrast with the 52°C my iMac's internal disk regularly reaches.

I was wary of the ventilator's sound levels, though. The CalDigit T4 is extremely compact and has what seems to be a plain fan, so it has the potential to generate a lot of noise. However, although it's not completely silent, the fan noise is low enough even after an hour of editing not to interfere with normal audio levels too much. To give you an idea: before turning the unit on, the sound level in my room reached 36dBA. After turning it on, it rose to 38-39dBA.

The quality of build of the T4 is brilliavery good, and its speed is equally impressive. Before copying files to the T4, I tested its performance with both Blackmagic Design's and AJA's speed utilities. CalDigit claims a T4 with hard disk drives can achieve a maximum read performance of 750MB/sec in RAID 0 and 550MB/sec in its default RAID 5 configuration connected to a Thunderbolt 2 capable Mac.

The read figures that I achieved were almost identical to CalDigit's claim. More importantly, however, is that the more important write speeds are pretty impressive, as well, with 487MB/sec throughput. What struck me is that speed goes up as files grow bigger. The bigger your file's video frame size, the faster the T4 will move it. The very best news is that RAID 5 writing speeds are close to RAID 0's.

CalDigit T4 in a practical environment

To find out how fast editing with the T4 was, I took to colour grading a timeline with Color Finale, adding a tracked text with TrackX and further slowing down things by adding a Yanobox Nodes 2 compositing element. I do realise these sort of tests are subjective, but throughput figures don't tell everything. I've had RAID boxes that were blazingly fast, as long as there were no files on the system. When there were, they started to feel like Lyle's Golden Syrup.

CalDigit's T4 did well, though. Rendering was snappy, tracking was quite fast and the Yanobox Nodes 2 animations didn't drive me crazy by taking forever. The sound levels were definitely not high enough to be frustrating, but when the audio became somewhat quieter, I did grab for my headphones and stopped listening to the monitors. I can't set the volume on them high enough anyway in order not to disturb the neighbours.