Finally, an easy way to send FCPX timelines to Motion 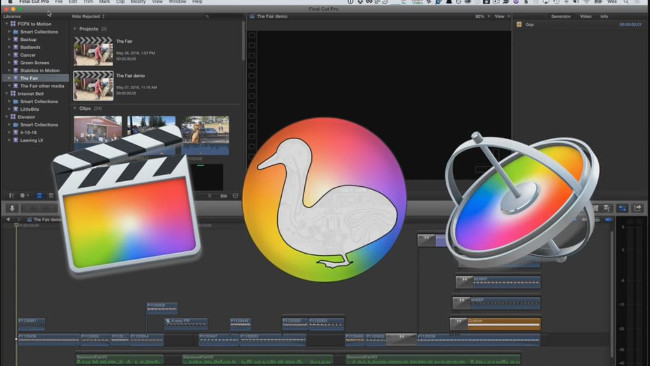 One of the problems that have been bugging Final Cut users since Final Cut Pro X was first released is that you can't send a timeline to Motion, create a composite and replace your original clip with the composited one. Xsend Motion claims it can do exactly that — or at the very least, it can do the first part. It is developed by Automatic Duck, the same people who developed the Media Copy and Ximport AE plug-ins. Xsend Motion is sold through the FxFactory management system.

Xsend Motion is both an app and a Final Cut Pro X Share extension. The Share extension makes things transparent and easy for those who don't like to tamper with XML exports. You can simply start out with a Final Cut Pro X timeline stuffed with transitions, titles, effects, colour grading, etc. When you choose this method, the extension makes Final Cut Pro X export an FCPXML file in the background and automatically sends it to Xsend Motion. The app lets you set a few options and will then translate the XML to Motion lingo and launch the application. However, Final Cut Pro X can't share a Compound Clip. If you want to send a Compound Clip to Motion, you must manually export an FCPXML file and open it in Xsend Motion.

Even then, not everything will translate. Some of the things that you add to a Final Cut Pro X timeline simply cannot be translated or only partly. If you take care not to add those elements to your FCPX sequence, you'll be impressed by the accuracy of the translation from the Final Cut Pro X timeline to Motion's. It looks and behaves identically, but by way of example: Motion doesn't support image wells, so the content of Crumplepop's SplitScreen that I used was gone. My carefully set up Hawaiki Super Dissolve transition was also missing. I may have been able to avoid these quirks if I checked the user guide for first. It clearly mentions the lack of support for image well content and most fancy transitions.

However, at times you still won't be sure if it's possible for something to translate from Final Cut Pro X to Motion. For example, I added KineticBadge icons to my test project and was informed at sharing time that KineticBadge isn't supported by Motion and therefore can't be translated. I clicked OK in the warning dialogue and found myself back in FCPX again.

When I tried a second time without KineticBadge icons, the project successfully translated, but the TrackX flare I added to the first clip ended up on a layer below the video clip in Motion — where it didn't show as it did in Final Cut Pro X.

Xsend Motion is primarily intended to let you send footage from FCPX to Motion. The round tripping part that you might crave for is not exactly what I understand round tripping to be. It comes down to this: you can fake round tripping by either saving your finished Motion project as a generator — this makes the results pop up in the Final Cut Pro X Generators Inspector — or save it as a movie and import that one into your Final Cut Pro X project.

Xsend Motion is a valuable tool, but it clearly isn't perfect. That's not really Automatic Duck's fault, but due to Apple's strange decision to make an easy integration between Final Cut Pro X and Motion virtually impossible. That's also why the plug-in is as effective as it can be — it works like magic in 99% of the cases. Also, let's not forget that no other developer has bothered trying to accurately send timeline projects from FCPX to Motion.