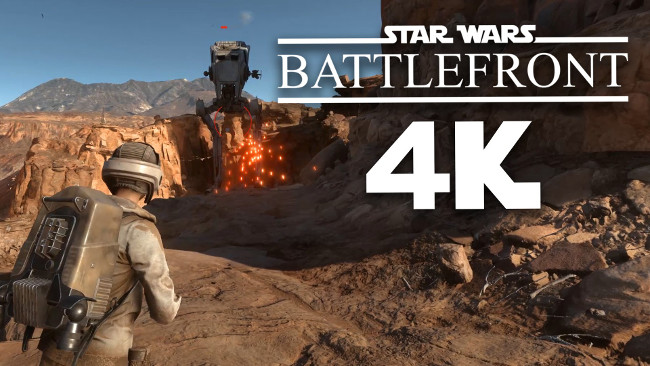 Videogames may light the way to realistic real-time imagery, as evidenced by a recent mod for Star Wars: Battlefront.

While feature films may impress (or bore depending on your viewpoint!) with their impressive pre-rendered CGI effects, the race is still on to create the most realistic real-time graphics in computer games.

It is incredible how far we have come since the likes of seminal classics such as Wolfenstein and Doom. I remember first loading up the latter when it was first released and being blown away at how, urm, realistic it looked, along with the incredible power of the Voodoo1 graphics card!

At one point in time, there was a never ending race to see how many polygons a graphics card could push. Now, there is much more focus on the things that really complete the idea of realness, from specular highlights, shadows, lens flare, through to the amount of thought that goes into lighting in general, as well as higher and higher resolution textures.

Graphical grunt will take another leap this year with the release of new 16nm process graphics cards, a leap from the previous generational 28nm. But if pure grunt allows ever more complex graphics to be computed, what can be done with the current generation of cards when more thought is given to existing games?

The mod scene for PC games is pretty big and has been for some time. One game that already has some incredible real-time graphics is Star Wars: Battlefront. But that, too, has had a makeover in the guise of the 'Toddyhancer'.

Be prepared for your jaw to drop. The man behind the mod, Martin Bergman, has gone all out to not only bring the PC version of the game into the 4K realm, but he has given many of the other graphical aspects of the game a serious makeover, too.

The textures have been revamped to take advantage of the extra resolution and they have been made much more realistic in the process. Lens effects have also been added, including realistic bloom and chromatic aberration effects. The results are quite incredible, as you can see from the video below.

If anything, this shows that quite apart from live action VR, the future is certainly strong for VR in a gaming and world immersion-sense, if we see even more realism than this.