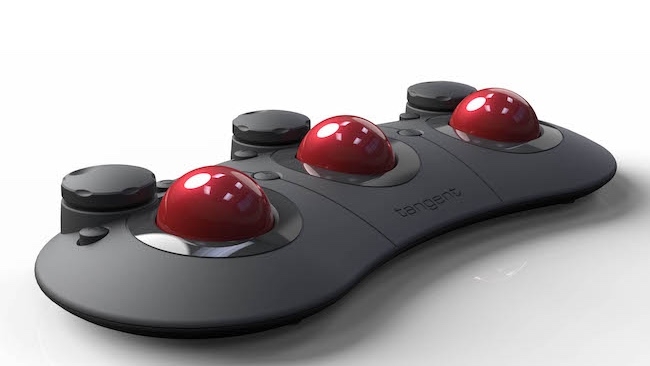 Following feedback from users who played with the prototype, Tangent has updated the design its Ripple control surface.

Tangent, makers of entry-level and mid-range control surfaces, wow’ed the one-stop-shop world when it announced a $350 colour correction control surface, the Ripple, last Fall. Details were limited except to say that it would be a compact, USB powered 3-trackball controller debuting some time in early 2016.

This is one of those things that editors, forced to be colorists, have been hoping for: a simple, small footprint machine that could be slid out of the way when not in use. However the company has been pretty quiet about it ever since, until this week when I received an email, and image of the final design of the product. Andy Knox, sales manager at Tangent, says that they’ve settled on a final design after trying out a few prototypes. The final design is based on feedback from users who checked it out at IBC last year.

The latest iteration of the Ripple has larger dials, wider distance between ball and dial, a deeper finger dimple and a grip on the edge of the dial.  All these changes to the original prototype were designed to make it easier to use the dial. Sadly, the Ripple doesn’t have a final price announced or a release date, but if you are at NAB in April you will be able to play with one.

It won’t be chipping in early 2016 as once promised, but until it does, you have what is admittedly a very lovely product rendering to take a look at.