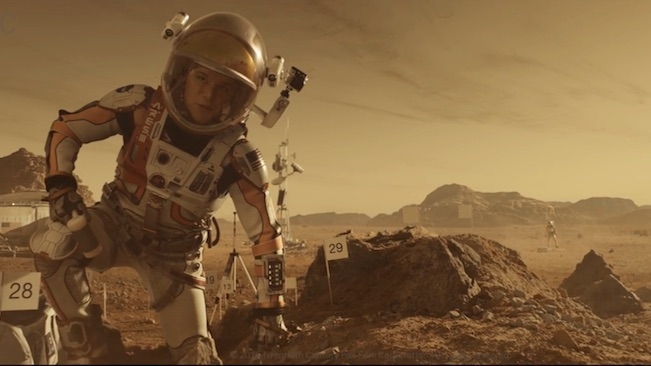 MPC delivered 425 shots for Ridley Scott’s The Martian, which is one of the leading contenders for a VFX Oscar — hell, for an Oscar period as well — at the ceremony at the end of February. This showreel illustrates why.

Mars is a tricky beast for special effects supervisors. On the one hand we have seen it so often on the screen — both in science fiction and science fact, from Barsoom to Pathfinder — that we all think we know what it looks like. And, on the other, the near future science has been so detailed by works of the likes of Kim Stanley Robinson’s monumental Mars Trilogy that we think we know how that should all unfold too.

In fact it takes a brave writer to tackle the modern day legend that is Mars and update it, but that’s exactly what Andy Weir managed with The Martian: one part Robinson Crusoe (though, of course, Robinson Crusoe on Mars has already been made, back in 1964), one part MacGyver. And Ridley Scott’s film adaptation has been faithful enough to the hard sci-fi of the book to make it a creditable candidate for best picture when the Academy Awards circus rolls into town.

The VFX work is top notch too, with some unbelievably detailed work going into multiple aspects such as transforming the Jordanian desert exterior scenes, greenscreen shoots, and finicky details down to creating faceplate reflections to keep alive the illusion that Matt Damon is, indeed, stranded on the Red Planet.

Have a look at it below. And thanks to Engadget for the tip…