Smoke drifts across to the Mac 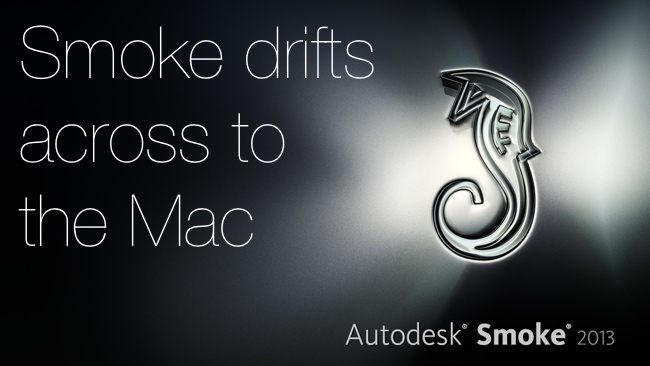 Smoke drifts across to the Mac

Autodesk today has released its much anticipated Smoke 2013 for Mac. First announced at NAB 2012, Smoke 2013 was released as a public beta in June

Since its initial beta release, Autodesk has posted 6 beta versions. Autodesk claims some 31,000 downloads during the public beta phase.

Smoke 2013 combines video editing and effects for editors who wish to accomplish more than just editing. Originally a visual effects and finishing tool sold as a dedicated hardware/software package costing over $100,000, Autodesk released in 2010 a software only version for Mac retailing at $15,000 and sold through its VAR network. It’s non Mac-like interface, relatively high price and complex interface were not conducive to wide acceptance in the Mac editing and visual effects community.

Smoke 2013 for Mac has been positioned as an editing tool with its familiar timeline, preview and program windows and full editing toolset. Additionally, effects may be added directly in the timeline. These effects included color correction, scaling, compositing actions and in general those customarily used by editors. An important feature in Smoke, however, is in its ConnectFx feature which allows the editor to enter a true node-based compositing environment. The workflow enables users to create complex compositions yet modifying those composites can be as simple as making changes to a specific node’s properties.

Hardware requirements have also been relaxed to allow Smoke to run on the latest MacBook Pro’s and iMacs. As with the previous version, an AJA Kona 3G is required for video output. No other capture cards are supported.

Smoke 2013 is available immediately through dealer channels as well as by download from www.autodesk.com. It is priced at $3495 with a 20% discount for purchases between December 17-January 25. Beginning December 17, users may download a fully-functional 30 day trial version. For those who had downloaded the most recent beta 6, that beta software will expire December 31.