Editing in 4K on iOS 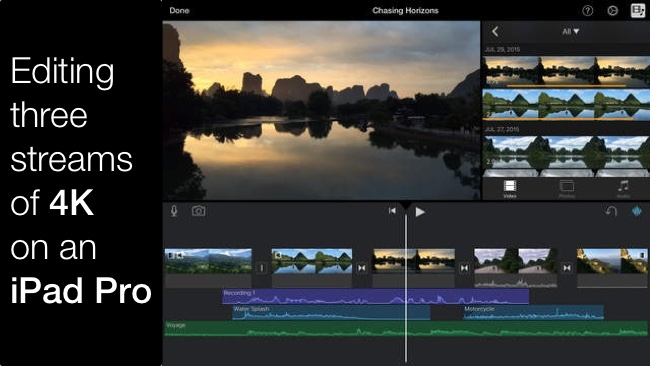 While you won’t be able to capture 4K on the iPad Pro, the latest update to iMovie allows you to edit 4K material on both that and other top-end Apple devices.

Top-end, in this context, means the most recent, so 4K support is available for the iPhone 6s and iPhone 6s Plus (which can also capture 4K too with their 12MP cameras) as well as the iPad Pro. And while iMovie is a slightly idiosyncratic package, the new version 2.2 does at least showcase what is possible with the latest A9 chipsets. 4K playback has featured as far back as the iPhone 6 models, albeit largely unannounced and unused, but now Apple can support multiple 4K streams — two with the 6S and what looks to be three for the iPad Pro with its A9x chip.

Underlying the headline 4K capability is also the rather useful ability to work with 1080p video in up to 60fps.

We’ve been playing around with iOS9’s new multitasking mode and, while not reliably implemented in too many apps beyond the built-in Apple set, it does quite dramatically improve the functionality and usability of even a normal-sized iPad. Add in a 12.9in screen and a full height media browser and you could have a quite phenomenally capable machine on your hands.

Admittedly it’s a shame that the Pro’s comparatively limited 8MP camera means you need to switch to the 6s models to actually record 4K, but having witnessed people attempting to capture video out and about with their traditional iPads over the summer you can only imagine how ungainly that task will become with an even larger Pro. And the ability to send 4K video over to YouTube with what amounts to a couple of taps on the screen is going to rapidly bump up the available content out there to an impressive degree.

Two things occur to us a) the 16GB 6s will be nigh on unusable and 16GB is no longer a sensible entry level device and b) the thought of being able to buy a 4K editing package off the App Store for £3.99 would have seemed laughable even a year or so ago.