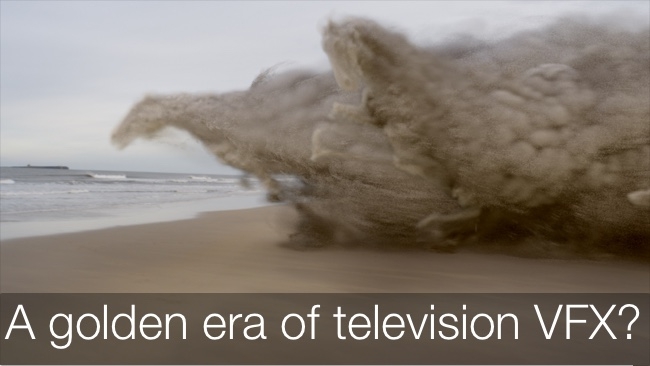 Two very different genre shows, HBO’s Game of Thrones which finished last night and the BBC’s ongoing Jonathan Strange & Mr Norrell, have convinced us that we are in a new era of television special effects and that TV can now do (nearly) everything that film can.

Both are admittedly seriously big budget productions (though you have probably have to concede that what is big budget for HBO is probably an order of magnitude above what the publicly-funded BBC reckons is costly) but both have pushed what can be done on the small screen to previously undreamt of levels of sophistication in recent episodes.

Strange & Norrell, which has just started on BBC America, is impressive for the way it weaves fantasy into the BBC’s already well-proven expertise of period drama. While there are relatively few bravura sequences — the sand horses sequence above being a noted exception — its recreation of Napoleonic era magic is seamless and very convincing.

Partly this is down to VFX house Milk’s expertise, partly it is down to intelligent writing. Good writers know what can be achieved with VFX at the budget their show has and write accordingly. British genre TV in particular has suffered from too many ropey effects sequences in the past when the producers have handed the CG artists £50 and said “surface of Mars please”. Strange & Norrell, however, marries exquisitely appropriate VFX with excellent direction and cinematography to achieve something really rather special.

We wrote recently about the stunning work on The Martian in The Martian: CGI that's so good you don't notice it, but to see that standard reproduced across seven hours of television *and* get all that Napoleonic period detail right is truly something wondrous to behold.

The show as a whole is pretty good too.

As to Game of Thrones, over ten episodes of unremitting carnage, both physical and emotional, the sequence that really stood out for us was the stunning 15 minute battle that occupied the end of episode 8 where the White Walkers laid bloody siege to the Wildling town of Hardhome.

Again, adroit use of camera angles had to be deployed to ensure that this could be brought in under even HBO’s Brobdingnagian effects budgets, and choosing an attacking enemy that the viewer would associate with jerky movement anyway was a clever tactic.

But there’s a tell in CG battle sequences that trips up even the biggest budget Hollywood movie and GoT aced it. It was Wun Weg Wun Dar Wun the giant basically: at no point in that entire 15 minutes did it break the suspension of disbelief even when smaller CG characters jumped on it. Full on fighting physics, moving shots, locked off shots, interaction with the environment and extras (real) and extras (virtual)…his presence in the battle scenes (and there were a lot of them) was absolutely seamless.

Everything else about the sequence was equally well crafted too, and all in all it managed to avoid the ridiculous over-choreographing that currently bedevils so many Hollywood action sequences. It was brutal, it was astonishingly realistic, and it told a narrative all of its own. For this author’s money it’s probably the best battle sequence I’ve seen on a screen — big or small — since Peter Jackson and Weta recreated Helm’s Deep in the New Zealand rain for Lord of the Rings.

All of which makes it easier to forgive the awful green screen of Daenerys riding a dragon in the following episode…As for certain other events in that episode, however, forgiveness for show runners David Benioff and D. B. Weiss might be a little longer coming.

Game of Thrones you will hopefully know all about, but have a look at the launch trailer for Jonathan Strange & Mr Norrell below.