Cinemartin's Cinec 4: If you need to transcode, you need to look at this powerful toolkit 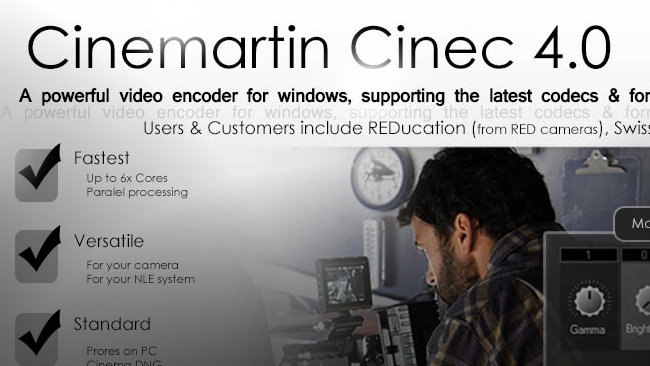 We take a look at Cinemartin's Cinec 4 transcoding tool and whether it's worth a premium over lower-cost and free options.

If you have a need to make extremely high resolution images smaller, so that they can be more easily stored, archived and distributed, you might already be glancing appreciatively in the direction of the new H.265 codec. You'd be a gun-jumping early adopter of the technologies involved, certainly, but while the rest of the world continues to ponder the practicalities of distributing 4K, it's reasonable to think that there might be something worthwhile to gain from pushing in at the front of the inevitable bandwagon train of beyond-HD distribution. The problem is, outside of a few fairly experimental implementations and some still-very-expensive silicon, exactly how we encode H.265 material in the first place.

OK, so there are already a small number of ways to do it, but not many come as part of such a comprehensive package as Cinemartin's Cinec transcoding tool, recently released in its fourth incarnation. With a compatibility list which reads like a who's-who of high performance video encoders, key features include ProRes encoding on non-Mac platforms, as well as the headlining 8K resolution support for H.265 and other codecs.

Cinec is a very general-purpose tool, with support specifically promoted for practically every origination format, including proprietary options such as Cineform, as well as files produced by things like Vision Research's Phantom high-speed cameras.

So, it's a general-purpose transcoding tool. Other such things exist, and we might be tempted to write Cinec off, but for the fact of just how general that purpose is, yet how specifically it seems to have been engineered for film and TV work. One of the problems with the movement of practically all postproduction tasks to software is that there is a huge amount of code written for the home user to convert files, but often misses out on key abilities – things like high bit depth support, configurability of luma levels and correct gamut conversion – that are dealbreakers in the more trying circumstances of paid production work. Certainly, Cinec has high bit-depth support, as well as options to impose 3D LUTs on converted material and an emphasis in the literature on quality scaling, which suggest that it has not been engineered to service the cellphone-to-YouTube market – although one suspects it'll do that quite happily, too.

Quality (for a price)

The other thing that indicates where Cinemartin is aiming this product is the price. At nearly eight hundred euros for the most complete version, Cinec is unashamedly targeted at people for whom the purchase will be a capital expenditure write-off, as opposed to a Paypal transaction. This is especially so given that free tools such as ffmpeg, which can be made a lot more friendly and usable with one of the many user-interface layers that exist for it, actually do many of the same things.

To some extent, we may be paying for convenience; a degree of computer ability (not to say a degree in computing) is required to get the best out of the free tools. Still, it seems quite a lot of money to pay for careful engineering, although as has ever been the case, the last five per cent of care and attention tends to cost more than the preceding ninety-five per cent. If Cinec really is as good as its market positioning claims, it should be very good indeed. The trick is whether that's reflected in the real world performance, reliability and quality of the work it does.

There is one thing, though, that makes me more optimistic than usual. Cinemartin has been producing Plin, their ProRes encoding plugin for Premiere Pro, for a while. Again, it's possible to lash up a solution to render ProRes directly out of Premiere for free, if you're a moderately talented computer science enthusiast, but the existence of a commercial product to do specifically that seemingly works against Apple's ambitions for their pet codec. This speaks promisingly of Cinemartin's attitude to the necessity of solving problems and of making things work, an attitude toward interoperability and collaboration that is too often lacking from the commercially-motivated decision-making processes of film and TV equipment manufacturers. So, whatever happens with H.265 (and whatever your needs), we should hope for great things here.