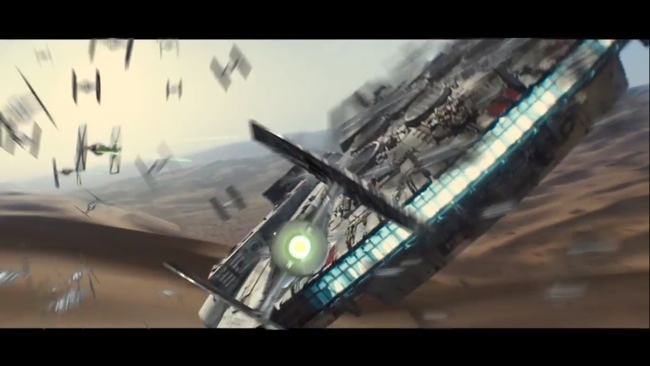 The Force is strong in these people. No sooner had the Star Wars: The Force Awakens trailer hit the internet than video artists got busy rotoscoping, adding effects and generally playing moddy havoc with the original trailer.

There is in all likelihood a serious point in here about post-modernism on the one hand and the democratisation of artistic tools on the other, allowing back bedroom artists to take content and run with it, shaping it into their own forms as they go. But in general it’s probably best to sit back and enjoy the internet doing one of the things it does best: parody.

The George Lucas spoof is probably the best of the modded trailers, and sees all of the digital ‘improvements’ that marred the original trilogy when the special edition volumes were released lovingly rotoscoped into the new trailer. In this case, more is not only more, it’s de rigeur, and by the time that entire waves of TIE Fighters are thrown at the Millennium Falcon in the end you’re torn between laughter and respect that anyone managed to get this done and up on the web so quickly.

Also worth a look too are the Crazy Lens Flare Edition, which plays on director JJ Abrams’ penchant for throwing lens flare into as many scenes as possible, and has been done well enough that people returning from a two week sojourn in the Amazon and others who may not have seen the original could be fooled into thinking this was what was intended all the time.

And then, of course, there’s the Lego version which is not quite as polished but, well, it’s Lego. Actually, there’s a whole host of them now, but for our money this one’s the best. (Sorry if you get an error - Youtube just isn't playing ball with this one and the web ewoks might have switched it for another - but Google the one by ZachFB Studios)