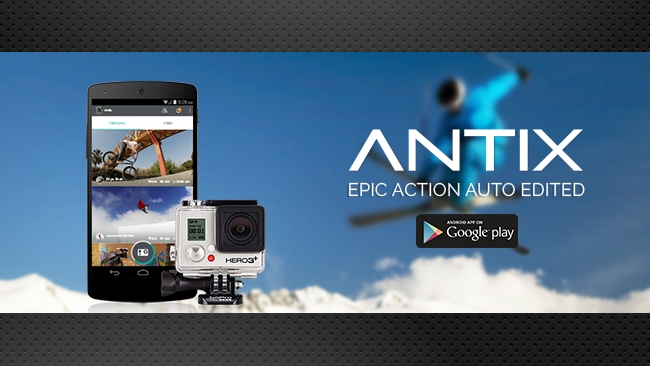 The year when Skynet was supposed to destroy the world has come and gone, but that does not mean that the machines have given up! They now have their sights fixed on replacing us editors. At least that’s what a company called Antix wants us to believe!

The company has developed a new piece of software that analyses your GoPro footage and automatically edits it down to highlights using the footage that it deems to be "exciting."

If you should happen to move in an "exciting" way, the app will determine that something interesting has happened and will identify and tag that section of the video. It can then auto edit the footage while you are still on location and upload it to Facebook and the like as well as to dedicated Antix servers.

Antix are attempting to build up a community. Videos that are uploaded to their servers are awarded points based upon the tricks that you perform in your chosen sport.

It is all seemingly clever stuff and I can see the points system being quite a cool way of adding in friendly competition to the social aspect of their platform.

It remains to be seen how effective the system is across different sports, however. For instance, activities that do not involve violent movement or have more consistent motion, such as running or mountain biking, might be at a disadvantage compared to the wake boarding examples that pepper their website.

Nonetheless, it is an interesting development and shows yet another useful application of the many sensors now found in our phones and gadgets.

Check out the full press release for Antix on Page Two!

LONDON, United Kingdom, October 14, 2014 - Available today, Antix makes editing and sharing action sports footage easier and more exciting. Taking part in action sports means you inevitably experience epic moments that you want to share with your friends. The burgeoning action camera market, with market leader GoPro has made recording epic moments incredibly simple. However for many this just means accumulating huge amounts of un edited footage that sits wasted on a hard drive or gets deleted.

Trawling through hours and hours of footage after an epic snowboarding or kitesurfing session to find those exact moments is tedious. By the time you’ve located the best parts, edited the footage and uploaded it to a platform like YouTube the excitement has passed.

To solve this problem Antix has developed intelligent technology that uses multiple sensors in the phone to track motion during action sports sessions. An smart algorithm determines when something exciting has happened which is then located in the video footage to produce a Vine -like highlight that is posted straight to the user’s profile. This innovative approach to automatic video editing is far less processing intensive than image recognition methods used in recent automatic video editors.

The Antix beta is available to download for free on Android devices and on the Web at www.antixapp.com.

Editing your footage into highlights is made simple. Pressing the record button simultaneously begins motion tracking and video recording. Antix controls your GoPro wirelessly for a seamless experience. When you’ve finished riding, Antix notifies you if something exciting was found in your session. Uploading the footage is made easy with several options; use the micro SD slot your phone, wirelessly transfer the footage straight from your GoPro or use the upload tool on the web platform.Share and show off your tricks to your friends straight from the slopes, mountains or water. Antix will surface the best highlights from users around the world, as riders strive to get their tricks in front of major action sports brands. To tap into the competitive nature of action sports enthusiasts, the platform has an in built points systems that awards more points for landing bigger tricks.

Antix has ambitious plans to become the autonomous action sports video platform that supports multiple cameras, by creating an ecosystem of action sports lovers, brands and locations. The web platform show-cases trending videos, riders and hashtags as well as enabling users to sign in and upload footage. The platform supports GoPro cameras with additional cameras brands being added soon.

Additional editing features are being tested and will soon be available to make your footage look even more epic.

Plans for monetisation include a freemium model with a Pro version and also a sponsorship model where brands can ‘sponsor’ riders’ videos.

Antix is available to download for free on supported Android devices at:
https://play.google.com/store/apps/details?id=com.trickbook.android.antix

Antix is available on the Web at:
https://www.antixapp.com