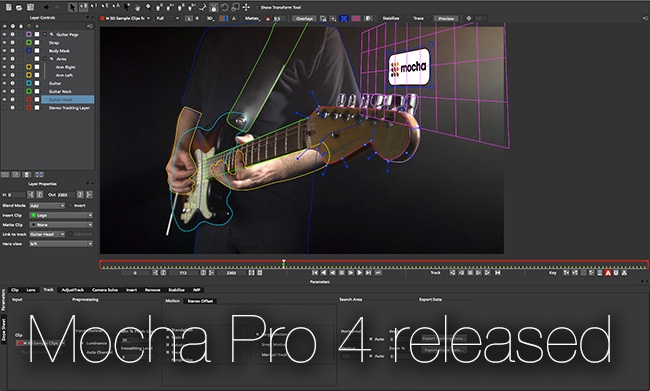 Imagineer have recently released version 4 of Mocha Plus and Mocha Pro, the industry leading planar tracking software, with some impressive new features

Tracking objects in shots in order to add layers, remove objects or stabilise the shot is no easy task, but for a few years now the go-to tool for the job has been Mocha (pronounced Moe-Ka) from Imagineer.

Whilst most other tracking systems use a point based approach, requiring the user to identify features in the shot that the tracker can follow, Mocha is a "Planar" tracker, which tracks the plane that a selected area of pixels is on, making it much easier to choose the area that you want to track and more importantly to select areas that should not be tracked.

Mocha can be used for a variety of tasks. The simplest is stabilisation where the software tracks areas of the image to identify camera motion. This is quick and easy to achieve with rock solid results.

Mocha is also widely used for screen replacement, where monitors or other devices need to have the images on them replaced in post production. Mocha makes this easy, even when people or fingers get in the way, and it will even compensate for lighting changes and reflections.

You can also use it to remove objects that should not be in the scene such as cars or people and again the workflow is very straight forward with Mocha compensating for lighting changes and movement.

Mocha is also a fabulous tool for Rotoscoping work, allowing multiple shapes to be tracked simultaneously and generating masks that can be exported to compositing software.

Finally Mocha can also correct lens distortion, especially useful with cameras like the GoPro, and can include this as part of the tracking data.

Mocha 4 comes in two versions, Mocha Plus which is an upgraded version of Mocha AE that comes bundled with After Effects. Mocha Plus works with Adobe After Effects, Premiere Pro, Apple Final Cut Pro, Motion, HitFilm and Boris FX. Then there is Mocha Pro, which is the full standalone version of the software and can be used with Adobe After Effects, Adobe Premiere Pro, Avid, Apple Final Cut Pro, Apple Motion, Autodesk Flame, Autodesk Smoke , HitFilm, Maya, Maxon Cinema 4D, Assimilate Scratch, Boris FX, Eyeon Fusion, The Foundry Nuke, Red Giant and Quantel.

Version 4 sees a number of improvements to the UI and overall performance with the ability to work with stereoscopic material as a major plus. The software allows you to identify areas to track and mask on the footage from one camera and then it will automatically track the matching areas on the other camera, making tracking and masking in stereoscopic material much simpler.

There is also a lot of customisation available, with new keyboard shortcut layouts and the ability to run Python scripts to integrate Mocha into your production pipeline.

Mocha can export tracking data and masks to many software packages but it can now also export a Nuke tracker node directly and can export masks to Adobe Premiere Pro CC.

If you have a MacBook Pro with Retina display you will be pleased to hear that the UI now supports the full resolution of the display, giving a clear and sharp image to work on.

The Imagineer website has a huge collection of example videos and tutorials which illustrate what Mocha is capable of and which allows new users to learn the software.

You can also download the software as a demo version which will never expire but has limited export functionality. This can be activated as a 15 day trial for final testing once you have learnt the software.