Updated MODO debuts from The Foundry 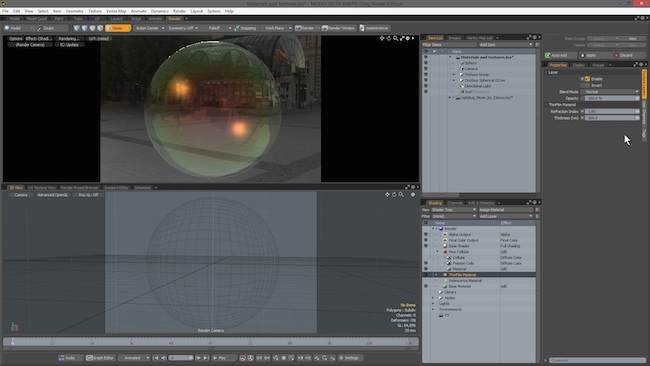 New, natural effects work right out of the box

Not only has The Foundry released a new version of its well-regarded 3D content creation application, MODO, but it has also announced a partnership deal with the MakerBot 3D printing platform.

The new version, MODO 801, adds some impressively ambitious new features such as Nodal Shading for complex shader building, and a completely rewritten Referencing workflow for large scene management. There are also huge updates to core content creation workflows like animation and particles, with the company stating that nearly every element of the end-to-end workflow has been improved upon and tweaked in response to extensive customer feedback from a wide range of industries.

Shane Griffith, MODO Product Marketing Manager at The Foundry comments: “The advances in 801 will appeal to users in the design world, and we have specific updates for games customers and great improvements to VFX workflows.

“With this release we’ve looked closely at MODO’s architecture and re-developed key parts based on what we know users want. This is a massive update for MODO and we can’t wait to let artists and designers get their hands on it.”

MODO 801 highlights are legion, but include:

Updates in to MODO’s dynamics and particles system allow artists to simulate flexible ropes and chains, shatter objects to create realistic destruction animations or use the new Glue system to simulate layers with breakable constraints.

Hair and fur has been dramatically improved. New hair guides can be generated from the base geometry or interpolated from existing guides. Artists can even sketch guides directly on the screen guide and relatively constrain them to the base surface. And a variety of new materials and textures allows artists to more easily add realism to scenes containing complex yet natural phenomena has also been added.

As for the announcement with MakerBot, the companies are working together to develop resources to ensure the seamless integration of MODO and the MakerBot 3D printing platform. Add in The Foundry's MeshFusion Boolean modeling plugin toolset and you have a rather powerful way to create custom models, which can then be exported to MakerBot Replicator 3D Printers. MODO also provides tools for MakerBot Digitizer Desktop 3D Scanner customers to clean and modify their scanned data in what is billed as a streamlined and integrated modeling environment.

“Using our solutions, artists have the ability to effortlessly blend, add, and subtract objects, then export to a watertight mesh, a process that we believe revolutionizes 3D modeling and offers infinite creative possibilities for MakerBot 3D printer users,” said Christopher Kenessey, Chief Sales & Marketing Officer with The Foundry.

MODO users also get 10% off MakerBot printers, which start at $1375 for a compact model and are more typically about $2500 for a desktop unit. We're not sure if they're absolutely essential to the VFX process at the moment, but probably not a bad way to get a head start on the merchandising if you're prototyping for kids TV. We can only imagine what George Lucas could have done with one...