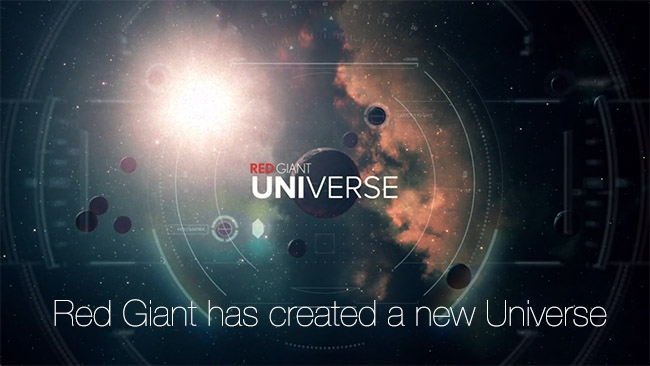 Red Giant are well known for creating some of the most popular plugins in use in post production today, but they have just released a whole new Universe of possibilities

If you work with Adobe After Effects, Premiere Pro or Final Cut Pro X then you have almost certainly come across Red Giant, creators of many plugins including: Magic Bullet, Pluraleyes, Knoll Lens Flares and Bulletproof.

Universe plugins are GPU accelerated and based on Java script, so they are easy to create and modify, and this is where Universe is going to be very different from other packages. The people who decide which plugins are going to be created are you, the users.

Universe is a community, with users able to feedback on the functionality of the plugins and suggest improvements and new plugins.

The other really cool thing about Universe is that basic membership is free. This will give you access to 31 free tools initailly but with more to be added. Premium membership adds 19 more tools such as Holomatrix, Retrograde and Toon-it and costs from $10 per month.

Universe plugins are Mac and PC compatible and initially will run in Adobe After Effects (CS 5.5 and up) Adobe Premiere Pro (CS6 and up) Final Cut Pro X and Motion. Lets hope they can add Lightworks to that list soon.

Here is a short video about Universe:

The programming tool for Universe plugins is called "Supernova" and Red Giant have put up a video of how easy it is to use. If this is also made publicly available then there will almost infinite possibilities for people to create their own plugins and share them with the community. Check out the Supernova video below:

Press release from Red Giant in full after the break

"It's rare we get to introduce technology that is entirely new," said Sean Safreed, Red Giant co-founder and CTO, who has been working with his team, behind the scenes, on Universe for the last year and a half. "Universe is an entirely new foundation for tools. It marries the simplicity of Javascript with the power of the GPU to deliver speedy renders and pixel-perfect results. Users are going to love how quickly we offer new plugins."

In total, Red Giant is releasing an unprecedented 50 new plug-ins at once - with more already in development. Every tool in the Universe library of effects and transitions is GPU-accelerated, both Mac and Windows compatible, and works across multiple host applications including: After Effects, Premiere Pro, Final Cut Pro X and Motion. The Universe library of tools is continuously growing—new effects and transitions are added regularly, and existing tools are updated often, based on user feedback.

In addition to the expanding library of free plug-ins, Universe also offers Premium membership, which gives users access to even more tools - including new effects and transitions, as well as existing Red Giant favorites ported over to the new Universe platform (such as Knoll Light Factory EZ, Holomatrix, Retrograde, and ToonIt). Premium membership is available through monthly and yearly subscription, as well as a one-time lifetime membership fee.

"I'm a motion graphics and visual effects artist, and definitely not a coder," said Aharon Rabinowitz, Red Giant's Director of Content and Communities. "Even so, along with the Universe development team, folks like motion designer Harry Frank and I have been secretly cranking out plug-ins for the last few months. Our new development tools have made it surprisingly easy. I'm super excited that we can finally share the stuff we've been making."

What truly makes Universe unique, however, is it's community aspects. Through Universe Labs, members get to help choose what effects and transitions Red Giant builds next - while premium members are eligible for invitations to early betas of new products, allowing users to give early feedback and actively help shape Universe’s expansion over time.

Red Giant Universe Free membership is available starting today, with the Premium membership available for purchase in March. Premium pricing will be $10 (monthly), $99 (yearly) and $399 (lifetime).

Red Pledge is Red Giant’s commitment to customer happiness, with no purchasing hassles. Learn about the Red Pledge guarantee at www.redgiantsoftware.com/redpledge/.

Founded in 2002, Red Giant (www.redgiant.com) creates an ever-expanding universe of effects tools ranging from plug-in suites, applications and mobile apps to Guru Presets, free products and sharing communities. We provide software for motion design, photography and color correction that is used for everything from major motion pictures to worldwide television programming to web production. Red Giant offers the industry-leading Trapcode tools for broadcast design; Magic Bullet Suite for color correction; and over 60 products that run in After Effects, Final Cut Pro, Motion, Premiere Pro, Photoshop, Lightroom, Aperture, Avid, Vegas, Nuke, and Avid Studio. Our effects have enhanced dozens of feature films such as Angels & Demons and The Social Network, and added sparkle to networks like NBC Universal, ESPN, Disney, CNN, Comedy Central, MTV, and TNT. Join us on Facebook (RedGiantSoftware), follow us on Twitter (@RedGiantNews) and get free content at Redgiantpeople.com.

Universe at a glance:

Red Giant Universe is a community with access to an ever-expanding library of new free tools for filmmakers, editors, VFX artists, and motion designers. Universe includes:

●      Porting of some existing Red Giant products to Universe (Premium)

●      Voting on new tools to decide what gets made next

Red Giant Universe is available free starting today, with Premium membership available for purchase in the next few weeks.