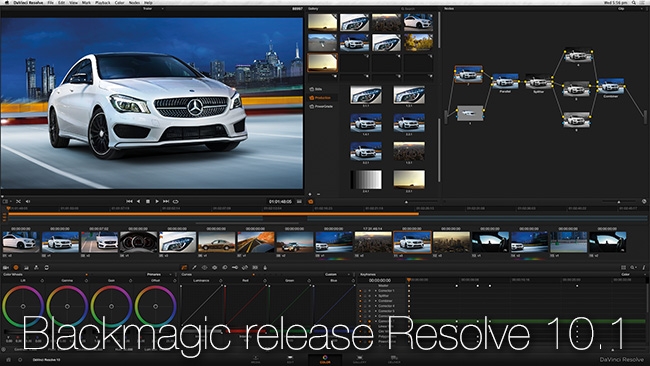 Blackmagic Designs have released an update to their Resolve Colour Grading software, version 10.1, adding support for the FCPX 10.1 XML format, an easy way to switch between multiple takes and rich text titles.

Blackmagic have released an update to Resolve 10 for Mac and Windows taking it to version 10.1. The update includes support for the new XML format introduced in Final Cut Pro X 10.1 and also adds a take selector allowing easy switching between different takes in the timeline.

There is added support for more media formats and for trimming frame based formats such as ARRIRAW, DPX and DNG. There is also support for Rich Text Titles, allowing control of text down to character level, and import of font properties from FCP 7 XML.

For those of you working with Sterescopic 3D material in the full version there are updates to the way Resolve 10 handles Stereoscopic media, with the left and right eye included in the same timeline allowing for easier editing and convergence on a seperate track to simplify keyframe editing.

Resolve 10.1 can be downloaded from the Blackmagic Design website and is a free update for existing users.

The new DaVinci Resolve 10.1 update adds innovative editing features that includes allowing users to preview and align multiple camera takes while editing, so they can quickly switch between takes to show their clients shot options live from the timeline. Editors can now copy individual clips in the editing timeline with a simple drag and drop, making it easier to use the same footage in different parts of the edit.

The enhanced editing tools also include support for trimming frame based clips such as DNG and DPX that reduces time in transferring clips for even faster workflows, as well as Rich Text title support which allows every character's size, position and color to be adjusted individually directly from the Edit page.

Also featured in DaVinci Resolve 10.1 are XML import enhancements for both FCP X 10.1 and FCP 7 customers. Compound clips from FCP X 10.1 with separate A/V elements are now split into individual clips and imported FCP 7 XML's include font properties and timeline markers as well as being able to bring across sizing, cropping and composition parameters. Now shot reframing adjustments made during Final Cut Pro editing will translate even more accurately into the DaVinci Resolve timeline.

"We are really excited to be adding even more advanced editing features so quickly after the release of DaVinci Resolve 10" said Grant Petty, CEO, Blackmagic Design. "Resolve 10 has been a massive update with over 50 new features including temporal processing, Open FX Plug-ins and powerful on-set tools. The additional editing tools we are releasing today give customers more precise control over their projects from within the DaVinci Resolve timeline and improves integration with popular editing and visual effects software so that customers get the best workflow possible."