Lucasfilm show the future of filmmaking 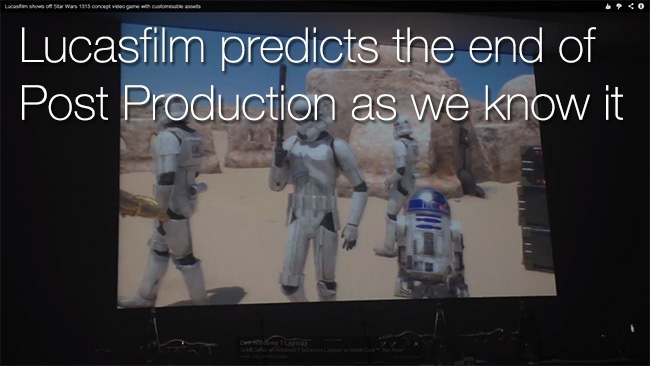 George Lucas' production company Lucasfilm, which was recently taken over by Disney, have demonstrated the use of motion capture and video game engines to create real time animated movies. Is this the end of post production as we know it?

Lucasfilm, the production company behind the Star Wars franchise and the VFX company Industrial Light and Magic, have been working on combining motion capture and video game engines to create real time animated movies.

"Everyone has seen what we can do in movies, and I think most people will agree the video game industry is catching up quite quickly, especially in the next generation of console titles. I'm pretty sure within the next decade, we're going to see a convergence in terms of traditional visual effects capabilities - making realistic fire, creatures, and environments - but working completely interactively. We think that computer graphics are going to be so realistic that, over the next decade, we'll start to be able to take the post out of post-production; where you'll leave a movie set and the shot is pretty much complete," He said. "I think that the current way that we make movies is a very pipeline stage process, which takes away a little bit of the organic nature of a movie set or real environment. I'm hoping real time graphics technology brings back the creative possibilities that we have in the real world,"

"Let's not dismiss the artistry you put into a final shot, we do spend a lot of time steadily tweaking blooms and lens flares or the lighting in a shot, but we'll be able to get a lot closer so that more run of the mill window replacements will be created interactively on stage."

He showed a video taken in Lucasfilms Performance Capture Stage which demonstrates the real time capture of actors movements and facial expressions whilst the operators can manipulate the environment, changing parameters like lighting and weather.

Obviously this is not yet ready for final production but it is a very useful tool for pre-visualisation and by recording the performance data the process of animating and tweaking a characters performance could become a much faster and simpler process.

Using the Kinect cameras to capture facial animation is a more elegant solution than systems which require the actors face to have dozens of reflective markers attached and then take time to calibrate.

As these systems become more powerful it will lead to very fast turnaround of Computer Animated TV shows and Movies. It will also be a great way to generate sequences for video games.

This takes Machinima to a whole new level. Thanks to the Inquirer for the video