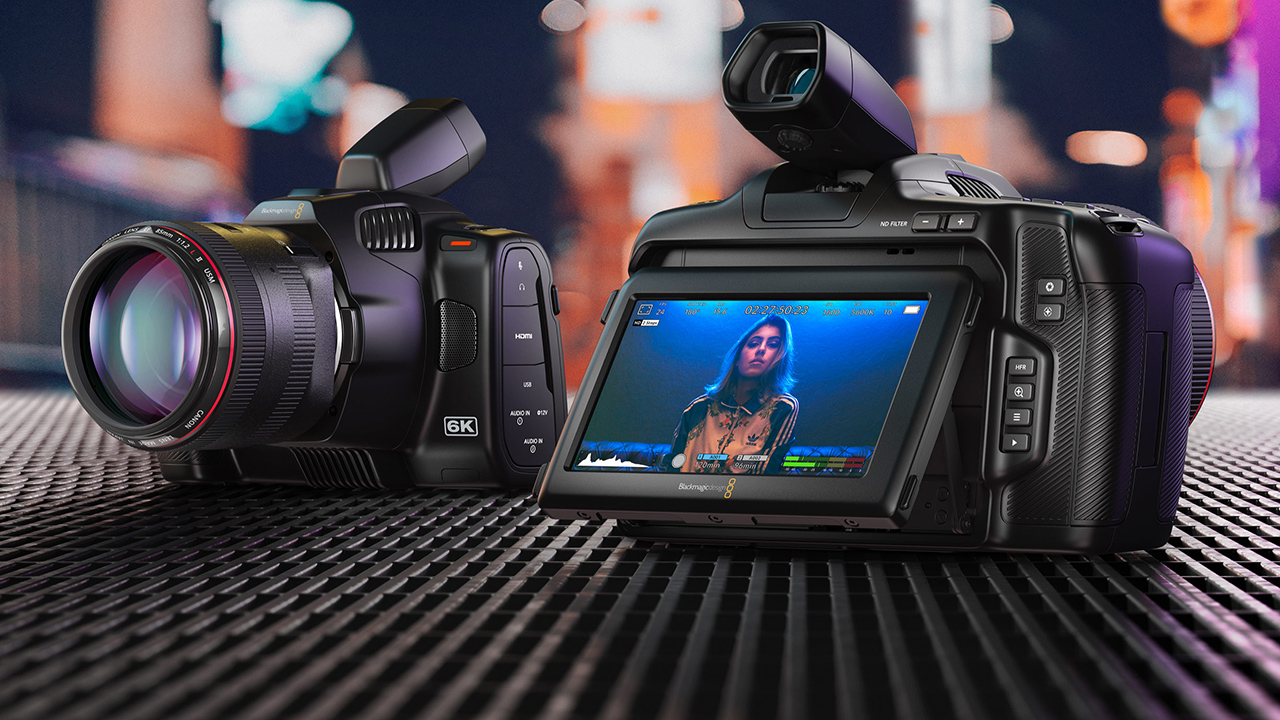 Blackmagic Design has announced a new addition to the BMPCC range, the Pocket Cinema Camera 6K Pro. Read on to find out the juicy details.

Now if you're of the Street Fighter 2 generation you could be forgiven for making a joke that this is the Pocket Cinema Camera 6K Pro Super Turbo Championship Edition, such are the naming conventions of camera equipment these days. However the new BMPCC 6K Pro takes the Pocket Cinema Camera concept and puts it on steroids. In short it has a lot of the features users have been pining for for a very long time indeed.

Okay the one thing that hasn’t changed is the general form factor. That might not win the haters over, and it is much, much larger than the first 4K Pocket. But, and it really is a big but, the new camera does feature some pretty game changing features, particularly when it is compared to mirrorless alternatives.

Now, I’m not sure if Blackmagic developed the camera in the last couple of weeks or so after reading my piece on ND filters, but that’s exactly what we’ve got here. Yes, you read that right, the new BMPCC includes a full motorised ND stage behind the lens. This feature alone would personally make me consider the camera above others, but it goes further. They are IRND filters. Yes, that’s right, full IR filtration. The filters cater for 0, 2, 4, and 6 stop selections.

No longer does the camera have a fixed screen. Now the 5” monitor articulates in the Y axis, meaning that it can be tilted up or down, drastically increasing the ease of use. There’s also an option EVF that mounts into a slot on the top of the camera. Again this is fully tilting with a 70 degree range, so it should be quite usable while cradling the camera with both hands looking down into it. The EVF is OLED with a resolution of 1280 x 960 with a proximity sensor and a four element glass diopter. Handily it comes with four types of eyecups that cater for both left and right eyed users. And this isn’t just a rehash of the previous model’s screen. It is in fact a new 1500nit HDR affair. 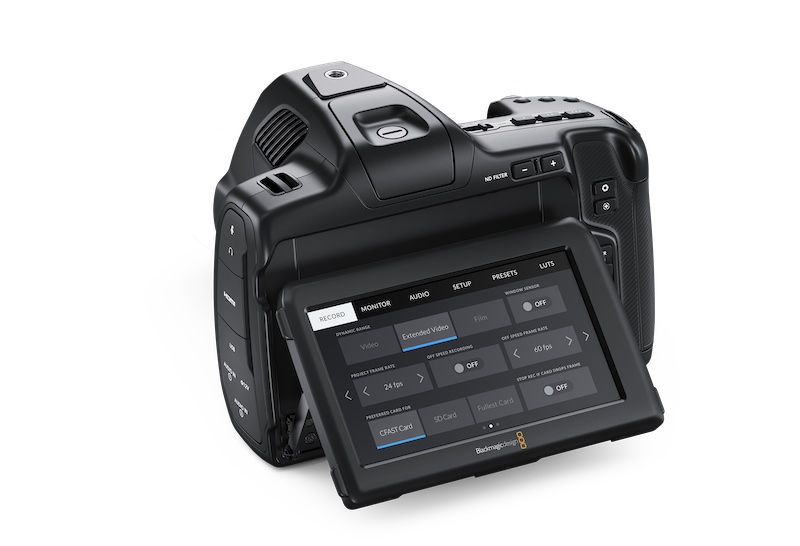 The other major bugbear about previous cameras was the battery. To be frank the Canon E6 battery they used was never, ever going to cut it. Thankfully the Pocket Cinema Camera 6K Pro now takes Sony style NP-F570 batteries.

Battery power can be further increased with the addition of the new battery grip. Unlike the previous camera grip, this new one doesn’t require removal of the camera’s internal battery. With the ability to take two batteries inside the grip’s case, you can power the new BMPCC for over three hours. That’s a pretty substantial increase and properly makes the system practically usable without the need to add a whole Frankenstein rig. There is one downside, though, and that’s that the camera does become a bit of a beast with the grip attached. I think we can very safely say that the BMPCC 6K Pro is most definitely no longer ‘pocket’ sized, if it ever was. Pelicase sized might be more accurate, but it's as big as it needs to be.

Joking aside, it would never be possible to make such a camera small and come with a practical powering system inside the body. Personally I’d much rather have a slightly larger camera like this with a longer battery life than compact with a battery that lasts 20 minutes. It does mean that extended periods of handheld work will be fatiguing, however. 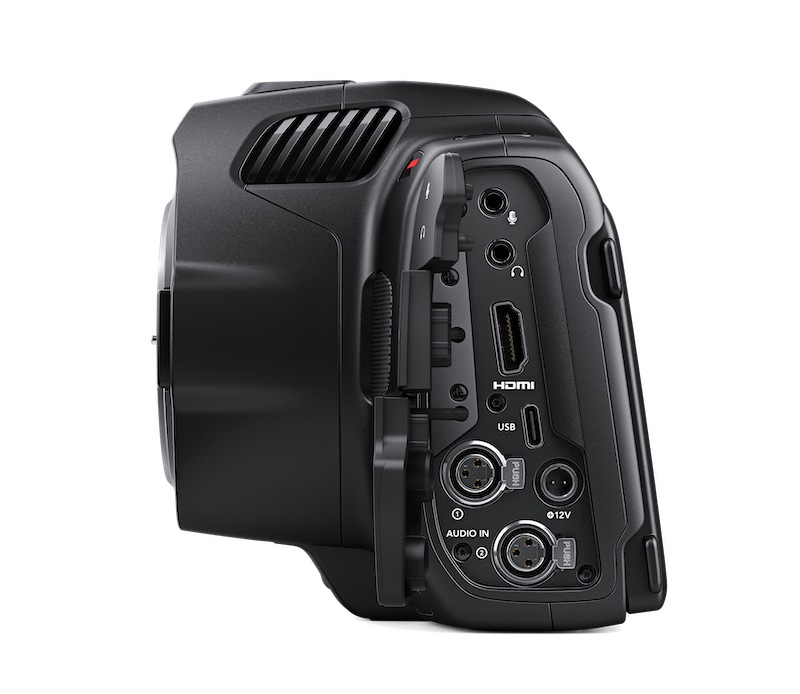 Side view of the BMPCC 6K Pro showing off the dual Mini-XLR sockets. Image: Blackmagic Design.

The same connectivity as the previous cameras is all here, with one exception. The increased body size has meant that a second mini-XLR socket has been added. The pre-amps on these cameras are pretty good, so again this feeds into practicality, taking away the need for messing around with external audio recorders. I know some masochists out there absolutely love recording separate sound, but I’m not one of them, so I'm all for quiet internal pre-amps.

The internal mics have been thought about as well, with built in shock and wind resistance, which should make them quite useful in picking up general ambience or as a useful backup should something happen to an XLR mic.

The camera uses the same 13-stop 6K sensor with dual native ISO functionality as the previous 6K BMPCC, although all cameras in the range will benefit from the gen 5 colour science by way of a firmware upgrade. I’m glad to see that the company has stayed with the 6K sensor. It’s a solid performer and there’s absolutely no need to go to 12K in a camera like this right now. It’s also good to see the company sticking with the S35 sensor size rather than following fashion and going full-frame. Maybe in a future iteration we might see a shallower lens mount, but for now the specification is practical, and sensible.

In all the new Pocket Cinema Camera 6K Pro is looking to be an incredibly solid, and much needed, addition to the range. It’s extremely well priced, too, listing at  £1879, US$2495, available now. The EVF costs £425, US$495. There are enough compelling features here to make any would-be mirrorless camera purchaser turn their collective heads. We look forward to putting the camera through its paces once we get a hold of a review sample. Stay tuned! Find out more on the Blackmagic Design website.